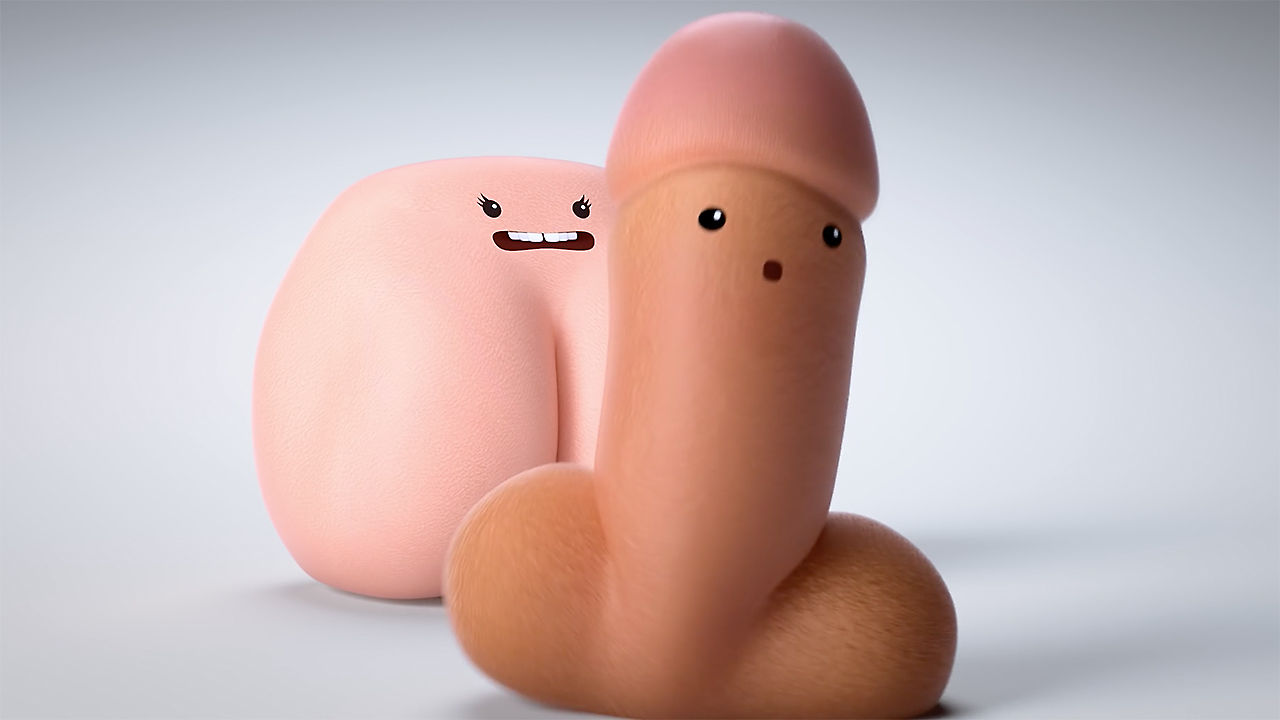 Out of the 367 students that participated, 255 identified as female (69%), 108 male (29%) and 4 as other/genderfluid (2%). This shows the beautifully skewed proportion of female and male students attending UCR. This group of participants included 290 sexually active individuals, and 77 people indicated that they had never participated in sex. However, for either of the two groups, this year’s survey had all kinds of questions that could be answered. Ranging from the weirdest thing someone has every said to you during sex (“I ordered KFC, it will arrive in 15 minutes”), to whether the appearance of a potential sexual partner would influence your decision on the use of protection (“Nope, don’t want your babies, even if they’re gonna be pretty”). 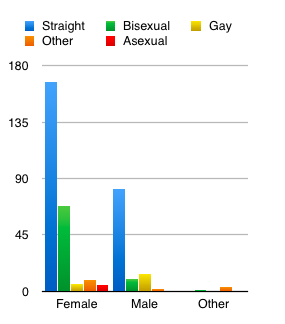 The graph shows the division of sexual orientations across the genders. It shows that there are significantly more gay males versus gay women. And that there are also significantly more bisexual females than bisexual males. We wondered if this could also mean that there were typical differences in responses between genders? For validity we had to keep the genders separated in the two male and female groups, but this indeed resulted in an interesting result for the amount of bed partners divided across the genders. This can be seen in the pie chart… ahem, BOOB-chart (Broad Orgasmic Overview of Bed-partners). The male population has had sex with about 2.7 UCR students. Females had just 1.4 bed partners. Most of this can be explained by the fact that the females outnumber the males. Another factor is that most non-straight males are gay and most non-straight females are bisexual. This means that if two gay men have sex with each other, the ‘sex count’ for males rises two times!

What is sex and how often do we engage in it?

Interestingly, around 50% of all participants defined sex as only the penetrative act, and the rest belonging to foreplay or (mutual)masturbation. The other 50% phrased definitions such as “sexual behaviour with someone else, be it oral, digital or penetrative”, or “anything involving genitals that results in an orgasm”. It may be clear that sex can mean many things, depending on the person they are with or the relationship that they are in.

The table below shows the divide to the question ‘how often do you have sex’ between 322 respondents.

This year, Tabula Rasa even invited one of UCR’s most respected statisticians, Jonathan Heek, to have a look at our dataset to see whether he could pull out some interesting correlations. We predict it won’t take long before Heek’s Dick Chart will be included in the Stats 100 curriculum. An interesting correlation revealed itself between the average amount of sex and the number of times people visit their parents. People who visit their parents more often tend to also have more sex. 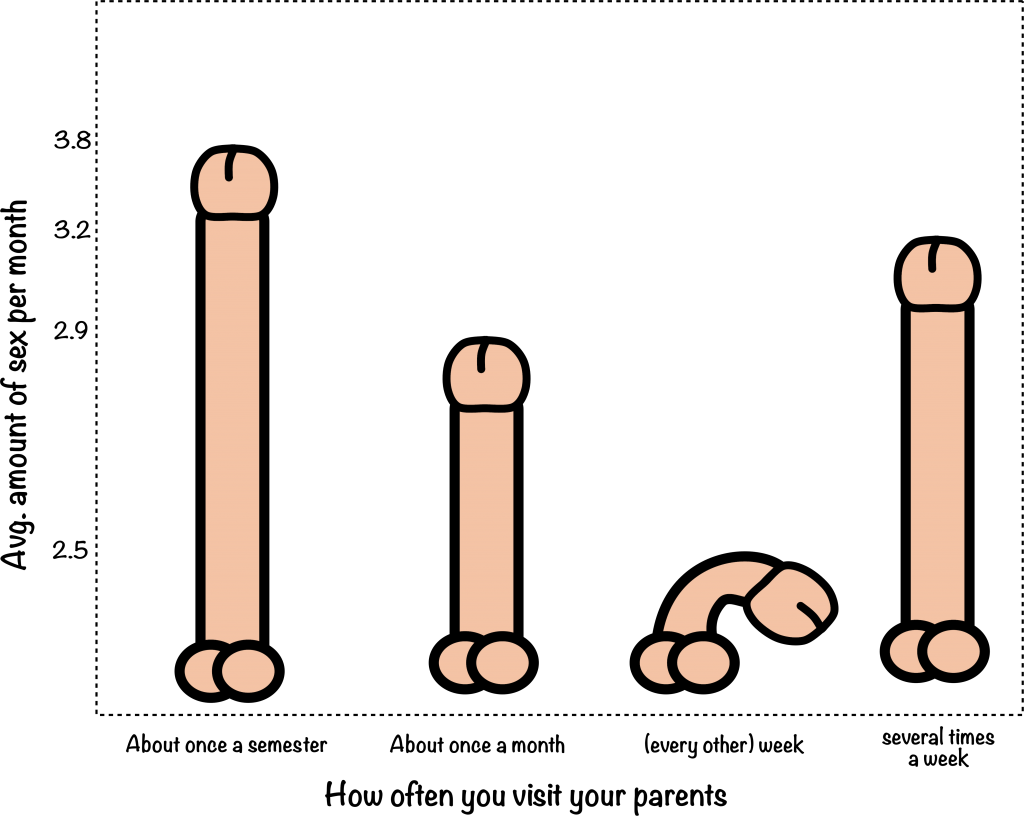 There are only a few people that visit their parents multiple times a week, this must be people living in Middelburg and surrounding villages. This small group does not obey the trend, as they significantly raise the average amount of sex, while at the same time visiting their parents a lot. The rest of the Dick Chart clearly shows that there is a strong correlation between staying at UCR and having more sex, versus visiting one’s parents a lot and having the least amount of sex. This can naturally be explained by the fact that people who are in relationships at UCR stay here more often together, as well as people whose parents live too far away to visit them more often also stay here.

Read further for some hilarious results!

Top 10 weirdest places where people have had sex at UCR

10 Stories that show the best/worst/most hilarious sides of sex:

1. “We were interrupted 3 times in one go by people ringing the doorbell…”

2. “My boyfriend and I had sex on the pier near the station in Vlissingen – it was awesome.”

3. “Had sex outside, got stung in my butt by a stinging nettle.”

4. “Sneaking out the back of Elliott during a Tuesday party to climb the ladder up to the roof. Having to kneel down in the gravel to have sex up there was kind of shitty, but we made it back for piano man.”

6. “We were both fucking high and because of this I was very dehydrated EVERYWHERE and it hurt like crazy.”

7. “I was on a trip with my boyfriend at the beach and we hired a jet ski. At one point when we were far enough from the beach, I turned around and sat face forward towards him. We had sex on the jet ski while sitting in the middle of the water. Was the most public and open sex I’ve ever had.”

8. “I dated a guy for a while because he paid for fancy dinner and had a beautiful house near the beach and a REALLY cute dog.”

9. “The weirdest thing someone has ever said to me during sex was ‘say hello to the audience at home’ while pointing at the corner as if there was a camera.”

After analysing all your juicy stories and ‘hard’ facts, it is reasonable to conclude that UCR students are very sexy. Man do we get involved in some sticky situations sometimes. We have tried our best to give you a full overview of all interesting answers, and we want to thank all of your for sharing your thoughts, experiences and opinions.

Gerjanne Hoek, Class of 2018, is a linguistics, politics and history major from Bunschoten-Spakenburg, the Netherlands.

Jonathan Heek, Class of 2017, is a computer science, mathematics and physics from Bunschoten-Spakenburg, the Netherlands.

Renske Wienen, Class of 2018, is a chemistry and cognitive science major from Rotterdam, the Netherlands.