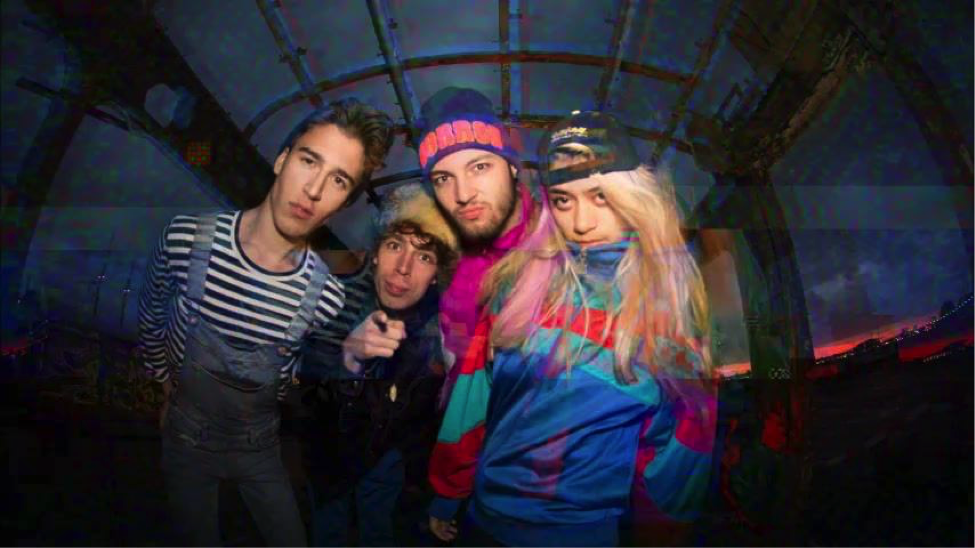 Tagged 44acidbabies, bands, interview, music, natalie burduli, out and about

The Garage Electro Punk Group That Will Blow You Away

All the way from Utrecht, the garage-electro-punk pop group 45ACIDBABIES made their way to our lovely Middelburg. They were invited to perform last week Tuesday at the Stukafest Afterparty. Stukafest was an overall great success, bringing together amazing performances scattered across different campus locations. The event itself was exciting and cozy, bringing together UCR students and the citizens of Middelburg.
The evening ended with an electrifying performance by 45ACIDBABIES, who completely took the stage into a different dimension filled with piercing guitar solos and energetic vocals. The crowd could not get enough of the hypnotic and thrilling experience that the band generated in a matter of seconds.
Right before they conquered the stage with their passionate performance, they agreed to be interviewed about the creative process that happens backstage, and the diligence that goes into writing breathtaking music that, at times, seems effortless, but in reality, takes hard work, dedication, and passion.

Band members, Giorgio Paquay, Marnix Wolmink, Daniel Brem, and Sophia de Geus originally met in the Herman Brood Academy in Utrecht, when they were put together in the same group to make music for a class assignment. At first, they didn’t know each other very well, but the connection was instant. “We figured out a certain style almost immediately. In that second week of the semester something magical happened”, Marnix says with enthusiasm, while the rest agree.

By the end of the semester, they were asked to do a small tour organized by the university, after which they wanted to go their separate ways. Luckily, the last concert of the tour was organized in Paradiso, a popular Amsterdam venue. The success of their last concert made it hard for them to part ways. They felt as though their story could not end on that note, and the desire to continue their music career together was undeniable.
Their rising popularity came as an exciting surprise. The band was keen on creating music without the pressure or expectations that come with fame. Their goal was not to become popular, but rather to keep doing what brings them joy.  “We thought our music was annoying to people” – jokes Giorgio, the talented and stylish drummer of the band.
The birth of the band brought on a name that had to be as thrilling as their music. 45ACIDBABIES wanted to combine something irresistibly cute and lovable, with something completely disturbing and appalling. And although there are no real babies present during their performances (for obvious reasons), they do have baby dolls surrounding the stage, creating an unusually artistic environment.

Their inspiration comes from a spectrum of different genres. In the beginning of their career, the band was taking a lot of their inspiration from Sleigh Bells and The Kills, but their tastes have developed over time. Daniel notes “all of us enjoy different genres of music, but somehow when we come together the acid baby is born”. They are in constant search for inspiration, and their taste differences only makes it more interesting to work together and to create a unique sense of style in their music. Sophia’s recent interest is a British-Japanese band named Kero Kero Bonita. On the other hand, Marnix enjoys 70’s funk music and is always searching for new sources.

When asked what the future holds for the band, they humorously replied: “world domination! And touring”. Giorgio’s dream is to play a gig in Russia, he would love to explore that side of the world, while Sophia would rather go to Japan. They have already toured around most of the Netherlands, with their favorite destination being the Piet Naus Memorial Festival in Limburg, where the beer tap opened and did not close for the three days.

Finally, the talk finished with some advice from Daniel’s about how to make a career in music: “put in the time to learn how to properly play the instrument. Especially when you want to play with other people, try to embrace the differences and create beauty. Determination is key.”

45ACIDBABIES is a band that has already conquered the Netherlands, and hopefully will electrify the rest of the world with their distinctive and outstanding performances. The next time they are playing near you, make sure to check them out for an amazing experience that will result in a constant replay of their music on Spotify!