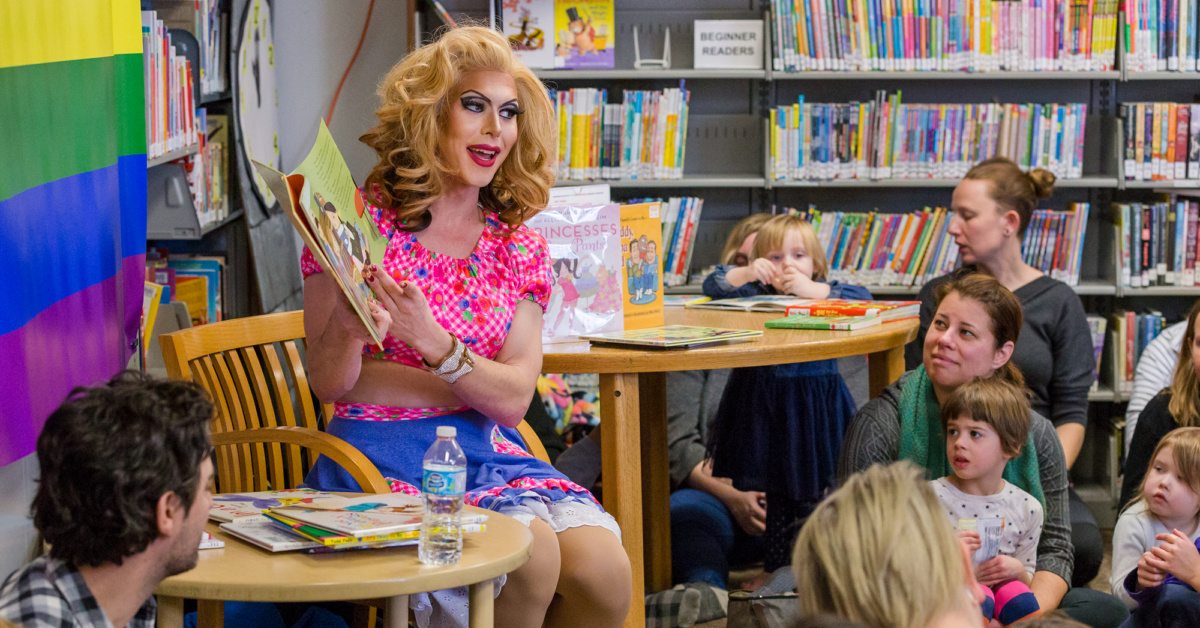 Promoting reading through story time hour and introducing more inclusive programming in American public schools- how to combine the two? The answer is the phenomenon known as Drag Queen Story Hour, an initiative launched in San Francisco in 2015. It invites drag performers to read children’s books in local libraries and has quickly spread from California to other countries as well as more conservative, rural states in America.

Co-founder Jonathan Hamilt suggests the increasing number of events like this in states like Nebraska, Alabama, and South Carolina might be a reaction to the current political landscape in the United States, which has a turbulent history with the establishment of LGBT rights. In the 1950s, homosexuality was considered a sociopathic personality disturbance by the American Psychiatric Association and homosexuals were banned from working for the federal government as President Eisenhower considered them a security risk. As state laws vary greatly within the country, the first same-sex marriage took place in 2004 in Massachusetts, while nation-wide same-sex marriage was not fully legalized until 2015 with the famous Obergefell v. Hodges case.

Despite the slow but steady crackdown on discriminatory laws, events like the Drag Queen Story Hour do not find widespread support everywhere. The local library in Greenville County, South California temporarily had an armed guard in response to threats made to attendees and performers at the event. A group gathered outside this particular library in protest, naming themselves a ‘’pro-family community gathering’’; angry parents argued that children should not be involved in the drag queen world. Legally, though, the protesters don’t have much standing: libraries are a public space protected under the US Constitution with the right to free speech.

Nevertheless, those who oppose the ‘’queer programming’’ in schools and libraries say that the Story Hour doesn’t meet commons standards of decency. Similar protests erupted in the UK in January when drag queens read out stories with LGBT themes and non-traditional fairytales. The drag queens themselves say that their goal is to educate the children about LGBT culture in an entertaining way, stating that their acts are age-appropriate and well-loved among the children attending.

In general, drag shows have become extremely popular in various countries and a staple in mainstream media: RuPaul’s Drag Race, a talent show-type program that’s been on air since 2009, has won 9 Emmy’s. Drag shows are not limited to any one demographic: children as young as 11 or 12 participate in drag competitions, and drag queens (and kings!) can be found in India, Lebanon, and Scotland.

LGBT programming has become more and more accessible through shows such as Queer Eye, an Atlanta-based makeover show spearheaded by the Fab 5, a diverse group of 5 gay men who will visit anyone from hipster mayors to church patrons; this show has also won 3 Emmy’s. Another recent addition to inclusive shows came with Netflix’s launch of Sex Education, which has multiple characters residing under the LGBT umbrella- a much-anticipated sequel is in the making.

Conservative outlets are particularly worried about the sexualization of children, claiming that the interaction between drag culture and young kids is normalizing pedophilia. Christian news pages deplore the ‘’exploitation’’ of confused children led on by their ‘’wicked’’ parents. In response to the controversy regarding young performers in front of adult audiences, a 10-year-old boy in New York City has set up a drag club specifically for kids. He wants to promote free expression for children in a safe space- with his parents’ consent.

Regardless of what your opinion is on drag queens, the presence of LGBT-focused programming is undeniable- and the pictures are quite something.