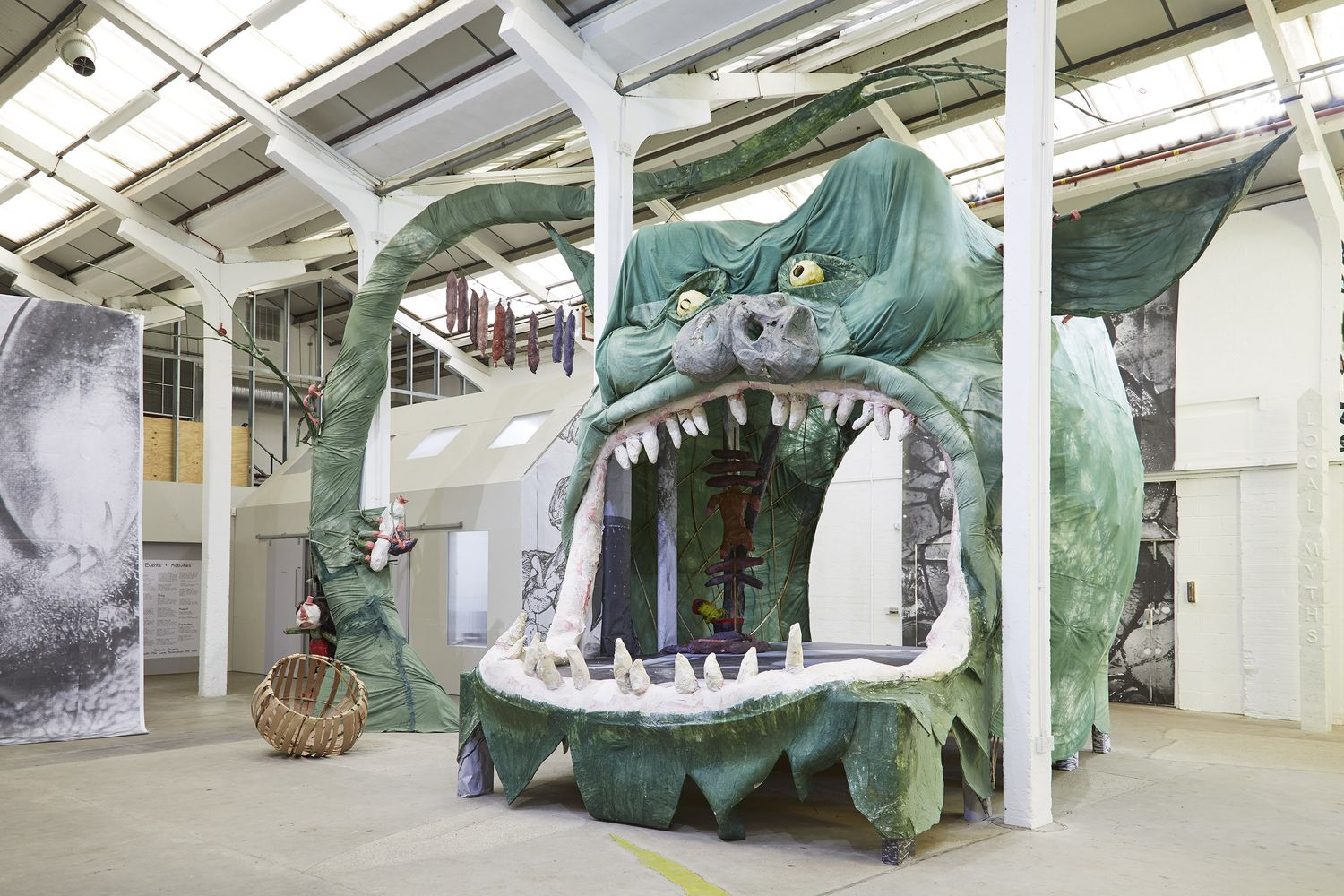 Understanding modern art is a difficult undertaking – and contemporary art is more challenging still. It’s no surprise, then, that a visit to a modern and contemporary art museum or gallery can seem a daunting experience for many. It’s not exactly like the national gallery or encyclopedic museum where you know exactly what awaits you, and even if you don’t, you at least know that it all makes sense.

The modern art museum and gallery has become a bizarre mix of things – the only common thing between each being their categorization as “art”. The commonality is hard to understand, much less take seriously, but what if they resist being understood and taken seriously?

That seems to be the case with the works of Monster Chetwynd and Pieter Slagboom, both currently displayed in solo-exhibitions at De Pont Museum (Tilburg) and the Vleeshal (Middelburg) respectively. Chetwynd’s signature DIY-aesthetic in “Toxic Pillows”, and Slagboom’s giant pencil crayon drawings in “As Long As the Potatoes Grow” both warrant a way of looking that’s different to how we approach works in, say, the Rijksmuseum or Mauritshuis. Both exhibitions invite us to look through the eyes of a child. 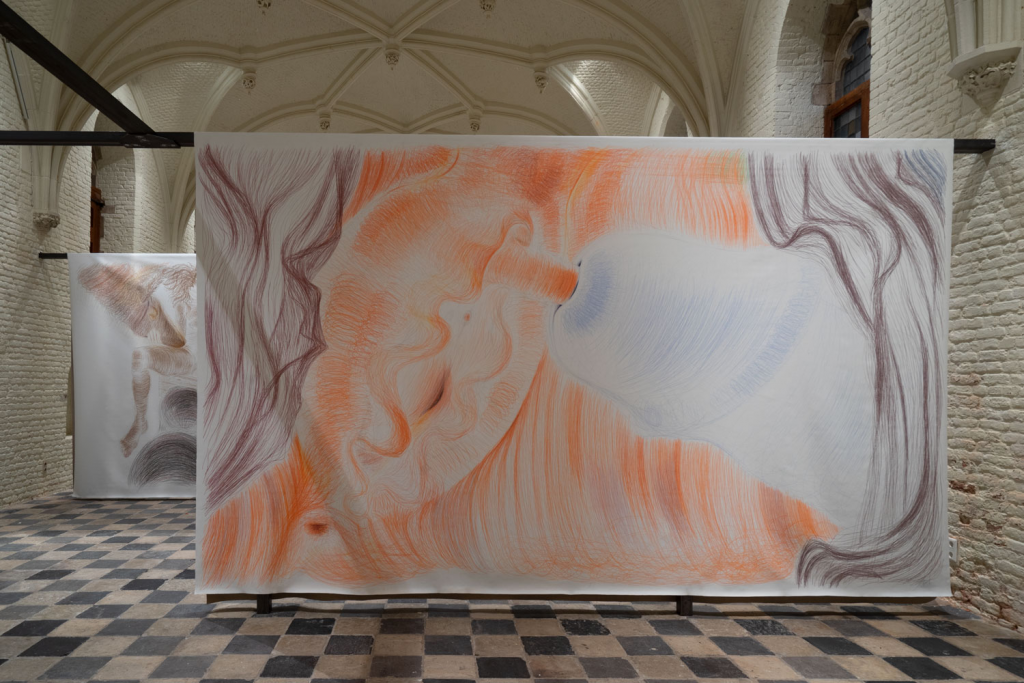 Matisse, the famed leader of the Fauvists and founding father of capital ‘M’ Modern art, said himself that the artist “has to look at life as he did when he was a child and, if he loses that faculty, he cannot express himself in an original, that is, a personal way.” Chetwynd and Slagboom take this further, creating worlds both original and deeply (and confrontingly) personal but also familiar to any onlooker regardless of age. After all, if the artist ought to look as a child, so too should his/her audience. “Toxic Pillows” does away with the seriousness of sculpture in favour of bright paints, paper-maché and collages. Slagboom abandons the rigidity of painting for unpolished sketches on what appear to be blown up pages of a sketchpad. 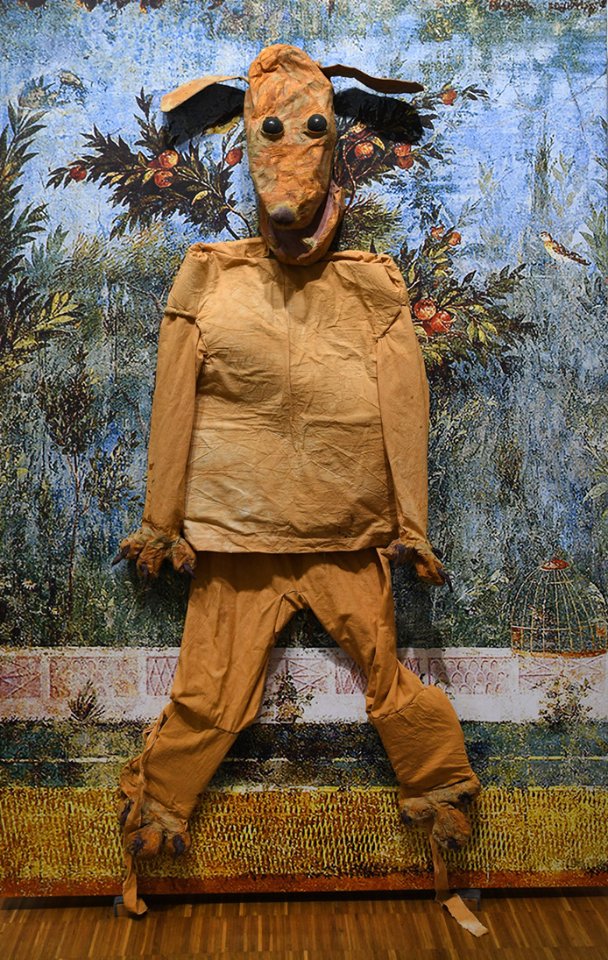 With all these evocations of child-like naivety paired with an apparent lack of refinement, it’s tempting to question the artist’s artistic capabilities. However, their merits as artworks go deeper than their surface execution, and can be found in the history of modern art itself. Encumbered by rules about what “art” should be, do, and look like, artists at the turn of the 19th century revolted and entered the Modern period with a new mission: to return to the basics, the essentials, the raw and pure. It is no wonder then that among the most appreciative of Chetwynd’s monsters and Slagboom’s nightmarish scenes are children. I think much can be learned from the kid who upon seeing Slagboom’s sketch of a clitoris penetrating a penis asked his dad, what exactly it was, received a red-faced “I don’t know”, and continued along our tour with unabated curiosity. For us grown-ups, it’s harder to look past the dark and disturbing images of life, death, sex, and suffering. But, if the paper-machésand pastels fail to appeal to our inner child, they at least reassure us that sometimes it’s okay not to understand- much less to take things too seriously.

Chetwynd’s temporary solo exhibition “Toxic Pillows” will be on show at De Pont Museum in Tilburg until 15 March 2020. Slagboom’s exhibition “As Long As the Potatoes Grow” can be viewed at the Vleeshal until 15 December 2019.

Gabrielle Gonzales, Class of 2020, is an Art History and Literature major from The Philippines.