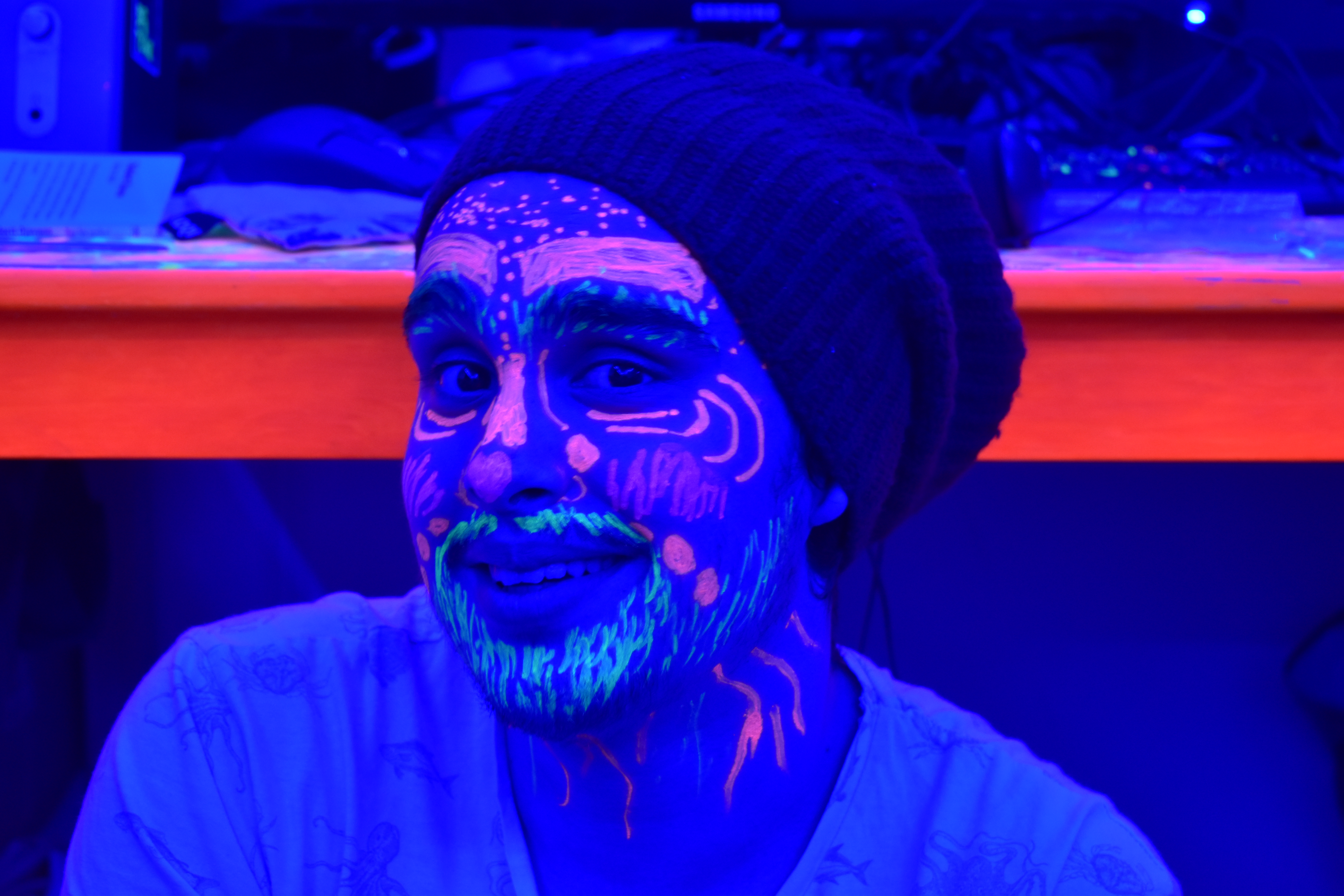 I’m a dude, who lives in Bagijnhof 3.

Occasionally I cook things, I love making people food. Well, not make people-food, but make food for people. I wouldn’t make people-food unless someone asked me that as their deathwish. Recently, I made a hot sauce and people seemed to like it. Then I made another one and that was liked too. I learned to make hot sauce on YouTube, and for my own, I was inspired by a couple of techniques I saw. The most inspiration I got from a Texan dude, who makes food videos. He has, like, 100 views per video. A little goldmine dude, that dude. I always wanted to make hot sauce, I don’t know why. I liked hot sauce and ate it quite often. The jalapenos tabasco is like 3 euro’s, it’s so expensive for the quantity. I felt like I could make a better one for less money. I started talking a lot with people and they supported my ideas, so clients are starting to line up. As of now, I have only given samples to people. I went around and asked everyone, “Hey, do you like hot sauce?”. It’s a good way to keep my mind of things that I struggle with.

I struggle often with procrastination, lack of sleep, and not cleaning my room. It doesn’t help that my partner is just as messy as I am. Well, we’re different kinds of messy. She would clean the cupboard but leave shit on the floor. Me, I’m like, “fuck the cupboards”, and clean the floor type of guy. Normally this should work out, yet we both add to our mess. The perpetual mess I live in all the time makes me feel chaotic, man…
Procrastination makes the work feel like work, which is not something I enjoy. Well, I love and enjoy learning, but I wish I wasn’t graded for it. They have to somehow confirm that we have learned, but it makes it unappealing to me. It makes it feel like high school, but I have no idea how they could do better either. I’m sure there are infinite amounts of ways to make a better system, but I’m not really concerned about those thoughts since I’m not that good of an academic person. I don’t make summaries, I don’t take notes, I just talk a lot. Try to put my ideas out there, understand some ideas, and try to get some answers sometimes. Sometimes not. I just talk a lot I guess.
I don’t necessarily want to be heard, I just want an answer. An answer to anything. To life. To art. To why we are doing things that are inconsequential to anything, but at the same time, they’re infinitely consequential. I don’t really try to get the answer by asking. Answers just slowly come by. It’s something that transcends rationality I think. It’s something that revolves around the senses. I think motivation is not rational. The urge to do things is not something rational. It’s a weird thing we humans have.

In general, I’m quite lucky to be at UCR. The people are very, very talented, and there are very insightful teachers. I really appreciate their wisdom. They help me and are good at listening. They’re good at communicating ideas or getting ideas out of you. Especially my favorite teacher, Dr. Hans Bloemsma. He’s a very sweet person, definitely. The rest of the students, well… You occasionally have the party-goers, they’re pretty cool. I used to be one of those people, but now I’m in a relationship and that does imply that I can’t do whatever without the judgment of another. Right now, I don’t party so I won’t spread Corona, but if it were just me, I would probably be partying. I would think that no one cares. She reasons me into not doing that, which is very sweet. In general, the people here are great, very trustable. Of course, there are some mean people, but there are always people like that. I have built my home here. I’ve had a long history, well a year now, in this room. I’ve grown here as an individual. I’m not the kid that I used to be when I came here. I grew in terms of wisdom, in terms of stupidity. My memory definitely has been impacted by my excessive consumption of *PLEEP* (he censored himself here). Life is life really. There is not much to dislike. Everyone is just trying to be happy and they do whatever they can. Especially in moments like these, people want to hang out and they feel alone. It’s difficult. It’s good to talk to people. It’s cool to socialize. When people don’t socialize enough they feel like: If I don’t, I will be stuck in the same place forever and no one will talk to me. I will end up finishing UCR with no one who ever really knew me. Like a ghost. Almost everyone has that fear. That probably causes a bit of partying, which is sometimes nice, but sometimes a bit too much. That’s okay, let the people have fun. We only have one life, maybe. Maybe infinite amounts of them. Who knows.
I don’t feel like I necessarily fit in here, but also not necessarily like I don’t. I’m sure this place could’ve been fine without me, and now it’s fine with me. I’m just a piece of the infinite puzzle; if it’s missing you’re never going to notice, but it’s nice if it’s there.
I would say that to anyone who thinks they don’t belong here: you belong here as much as you think you belong here, as much as you try to belong here. It will be difficult if you don’t give a bit of who you are to the world. Of course, university is the place for exploring who you are and most often it can feel like an identity crisis. Do I want to be this or that? Often you should just stick to who you are. Try not to annoy people, and try not to talk too much. These are just notes for myself really. Just hang out with people, talk to them. It’s never easy for anyone, but you never know unless you try. For me it just happens spontaneously, I just talk whatever’s on my mind. Sometimes people get weirded out by me, which I understand. I would be too. I say some awkward stuff out of context, that I pulled right out of my *WEEEED*. But it’s a process of trial and error. It gets very often very awkward, but is it really that bad? Please try laughing at how awkward you can be.