What’s Up With Poland? – A Report From The Front 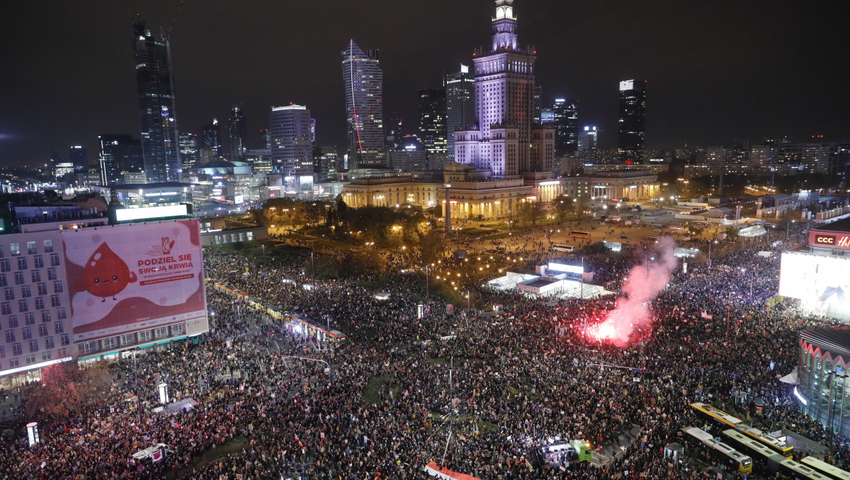 Poland is experiencing the largest protest since the fall of communism in 1989. Tens of thousands of Poles are on the streets, and not only in the major cities, but across the whole country, and they are furious. As a person born and raised in Poland I can’t stop thinking: how did my country end up like this?

The current governing party, Law and Justice, came to power in 2015. They started out by placing their people in charge of all major institutions and state-owned companies. Including the biggest gas station chain, and a prestigious horse breeding farm, which soon became known for a case of misconduct leading to mistreatment of the animals, and even in some cases, their death. From a world-known horse center where the richest people in the world used to keep and trade horses, not much is left. And that’s only a horse-breeding farm. There have been tens or even hundreds of different controversies across many different industries. Also, all the state-owned media became subordinated by the government, so that many of Poland’s major television channels, news outlets, radio stations, or newspapers are now used for party’s propaganda.

In the five years of Law and Justice’s rule, they have been using a strategy used currently by many, mostly conservative parties and political figures around the world: turning people against each other. One of the first groups of people they have attacked were the judges as they needed to take over the judiciary system. With their actions, they made the work of courts very inefficient while calling in the media how rotten the whole system is and attacking the judges. Soon after they took over the Constitutional Court and a big part of the Supreme Court.

Next, was the education system. If you need to know one thing about the Polish education system, you should probably know that it is bad. Really bad. It’s outdated and schools are barely equipped. Furthermore, teachers are one of the worst-paid groups in the country, since you can earn more as a cashier in any supermarket than by working in a public school, which requires 5 years of university education. So after they came to power, the Law and Justice party also decided to take care of education. Basically, they turned the whole system upside down, where they eliminated middle schools adding extra years to the primary school and secondary school education while leaving most of the middle school teachers jobless. Students of certain grades were affected more than others by these suddenly introduced changes. After spending years in one education system, the students had to adjust to a new one which often required different sets of information than the ones that they had been taught. Teachers went on strike and there were no classes for weeks. Because of this, teachers were called the new public enemy and they became disrespected and insulted by a big part of the society. When the next school year came, the country was short of a couple thousand teachers.

And then the pandemic happened. Government officials were repeatedly diminishing the danger in the media. According to them, it was the fault of the greedy and lazy medical workers that the hospitals are clogged and not their poor handling of the situation and years of negligence.

Besides the workers of the justice, education, and health systems, the government has also been attacking the farmers, LGBT groups, refugees, Muslims. It’s worth mentioning that the whole presidential campaign of Law and Justice candidates in the 2020 elections was based on convincing people that the country is under attack by the LGBT community. I would say that the campaign was quite successful, given how many people were physically assaulted on the streets just by wearing a rainbow bag or by having colorful hair.

Over the years multiple elections have come and gone and the Law and Justice party managed to remain in power. There were many controversies about nearly all the elections that took place. The most recent ones that took place during the first wave of the pandemic, were organized unconstitutionally, but the country is so used to the party breaking the constitution, that it was not even considered too big of a deal. Just one more crime from the thousands that the government has committed in the last 5 years.

But suddenly it has been enough…

On October 22nd, the Polish Constitutional Court, which I remind you is now controlled by the government, deemed abortion in cases of lethal fetus defects illegal. Until then, Poland had already one of the strictest policies in Europe, with abortion allowed only in 3 cases: 1) rape, 2) threat to the mother’s life 3) lethal fetus defects. Right after the decision thousands of people, mostly women, went on the streets and went toward the house of the party’s leader. This spontaneous protest was quite peaceful and civil, but it wouldn’t stop the police from using tear gas. And the protest has taken place every single day ever since.

People went out to the streets even in smaller towns. Kraśnik, a town of 34 000 inhabitants, which was one of the places to declare themselves an “LGBT-free zone”, has been recently known for banning wifi in schools “to protect children from the dangerous 5G influence”, also has witnessed its own protest. But even towns of less than 5000 inhabitants have experienced their own demonstrations with hundreds of people attending. One of the elements of the protest was entering the catholic churches during the services (peacefully), as the church has been influencing the politics and Law and Justice’s actions for years, and priests even encouraged to vote for them during church services.

We’re experiencing the biggest protests in modern history and for the first time in five years, most of the country seems united. Protests of women were joined also by other pissed groups like farmers and sexual minorities. What’s the best choice here for the government? Negotiations? Nope. They called their followers to “defend the churches from the leftists” and claimed the protests to be attacks by leftists, the LGBT community, Western agenda, etc.

And here we are now, protests are still taking place. Postulates have been made and the government was called to respond to them before this article was published. Do I think they will be reasonable about this? No. But I’m hopeful and I see these protests as a potential breaking point in this 5-year long nightmare that my own country has become. It looks like that for now the decision to restrict abortion has been halted, but the protests are still happening.