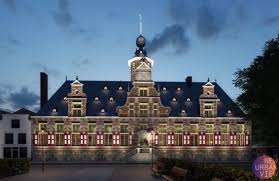 When walking drearily on the almost-empty streets of Middelburg after a 16:00-18:00 class, you realize that you forgot to buy food. So you go to the supermarket in the dark to pick up ready-made pasta, a vegetable for nutrition, and some candy, which you can open on the way back for comfort and company. Chances are that somewhere between the police station and the Appie, you will notice a strikingly large luminous building shining against the backdrop of a cold winter night. Drawn like a moth to a flame, you might ask yourself what its function is. Is it an old town hall, a prison, an elderly home for very fancy elderly, or a house for a family that might want to adopt you? No, you are mistaken: it is Cinema Middelburg.

Cinema Middelburg, which just opened its door again in regards to the virus, always hosts a variety of movies, ranging from Tarkovsky’s Solaris to ´De Grote Sinterklaasfilm´. For international UCR students, however, the regular screening of artsy foreign films features the problem of those subtitled in Dutch, thus often excluding non-native Dutch people. Yet, with the cinema´s new project, change is coming.

A plan for opening the so-called Cinema club has been a few years in the making, drawn up by Simon Blaas, director of the cinema and long-time music, literature, and movie fan. The ´Club´ is officially registered as the smallest cinema in the Netherlands, as it can host 15 people (only five during corona!), thus creating an intimate and immersive setting to watch films with friends and family. Each month, the club will have its own theme and demographic, including that of ´ex-pat´ movies, movies with English subtitles, catered to the international community of Middelburg. This new second movie theatre also allows viewing more alternative films in which a smaller audience is generally interested.  Moreover, the movie theatre will also be available for hire, so that people can host small birthday parties or have a romantic evening, including food and drinks from the restaurant in the building.

The second movie theatre is located next to the main building, in what is the old garden shed. A couple of weeks ago, the cinema held a test screening of a movie with some students from UCR. I asked the unbiased candid opinion of Nina den Hollander, an employee at Cinema Middelburg: ´it was a good experience.’ She also claims that the small cinema has something to add to a person’s overall film experience, as it allows people to watch a film with a selected company. And also, find that feeling of stillness and immersion that you might not normally find when watching a movie at home.

I agree. Club Middelburg will offer that new, unique cinema experience while also being more inclusive of people who are not Dutch or people interested in alternative movies. Although it is not opened officially, keep your eye out by looking at the Facebook page of Cinema Middelburg. Eventually, you can bring your friends and/or lovers (no more than 4!) for the experience of a lifetime. Until then, maybe take a look at the normal offerings of the cinema, as ´De Grote Sinterklaasfilm´ can also be fun if you don’t understand Dutch.