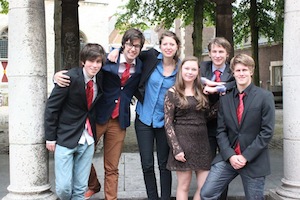 After having given them the time to rest this weekend, I got the chance to meet the new RASA board and talk to them about their experiences during this year’s introduction week. Occasional yawning was the only sign of tiredness after the exhausting, but very successful week of meeting a lot of new people, partying and fun.

As it is well known, organizing IntRoweek requires a lot of time and effort. Preparations were underway as early as the end of May. The initial idea for a theme was vegetables, but music idols proved to be more convenient. Just imagine dancing broccoli at the Thursday night party.

So on Monday 19 August it all started once again, but not without some minor difficulties. During the Monday morning welcome ceremony, the first speeches ended earlier than expected, thus 200 first semesters had to be controlled and entertained before assigning them to their families. Fortunately, the students likely didn’t notice.

You can expect a bit of chaos and it can even have some positive side effects. Like Marius d’Hond, RASA Treasurer, experienced that when you are busy with rushing from one place to another or getting control of a situation, you do not have the time to be nervous.

Organizing the week also includes having back-up plans. However, a beach walk and a BBQ, for example, could not have been easily replaced in case of rain. Robert Peeters, one of three RASA CAOs, explained that their biggest worry was probably the weather, but luckily everything turned out to be fine in the end.

There were some new editions to IntRoweek activities this year. Apart from the addition of a BBQ at the beach, the family speed dating was a lot of fun and a great way of meeting other freshmen. In assessing the week for a favorite day, it was indeed difficult for the board to come up with one although they admitted that the Schuttershof party was definitely high on the list.

Given the distinction that comes with being an elected member of our student association, it might be easy to remember that they too are students. “What is important to us is that we are still seen as students like any other”, Inge Zwart, RASA Chair, pointed out, “we just organize some events; you can still just party with us or knock on my door for a chat or some help.”

Apart from being “normal” students, RASA board members do play an essential role in UCR student life and have a lot of responsibility. They are of course not completely without help: Anne-Laure acknowledged that support was there before and during the whole week. The godparents were amazingly helpful, the boards cooperated, and there are many more people on the list to thank! They were also glad that, in general, the families themselves were very energetic and enthusiastic about the whole week.

On the last day, the dinner was held on the Abbey Square and it was a very emotional ending of the week. All board members assured me that although it was incredibly stressful, exhausting and that they were a bit afraid of their phone bills after constantly calling each other, the experience was simply irreplaceable and the positive feedback was the biggest reward for all the effort. “People randomly come up to you, thank you, and you can see that they enjoy their week; nothing can beat that, it is the best feeling!” Steinar Boomsma, RASA Secretary, exclaimed. Ferry Tillekens, another RASA CAO added, “I would definitely do it again!” to the agreement of the entire board.

Showing their commitment to their positions, when the interview ended, they were already organizing their tasks for the upcoming week. It is obviously a lot of hard work to be on the RASA board, but this one has now proven to be more than capable of handling the responsibility.

Lisa Rückwardt, class of 2015, is a Law and Psychology major from Dortmund, Germany.