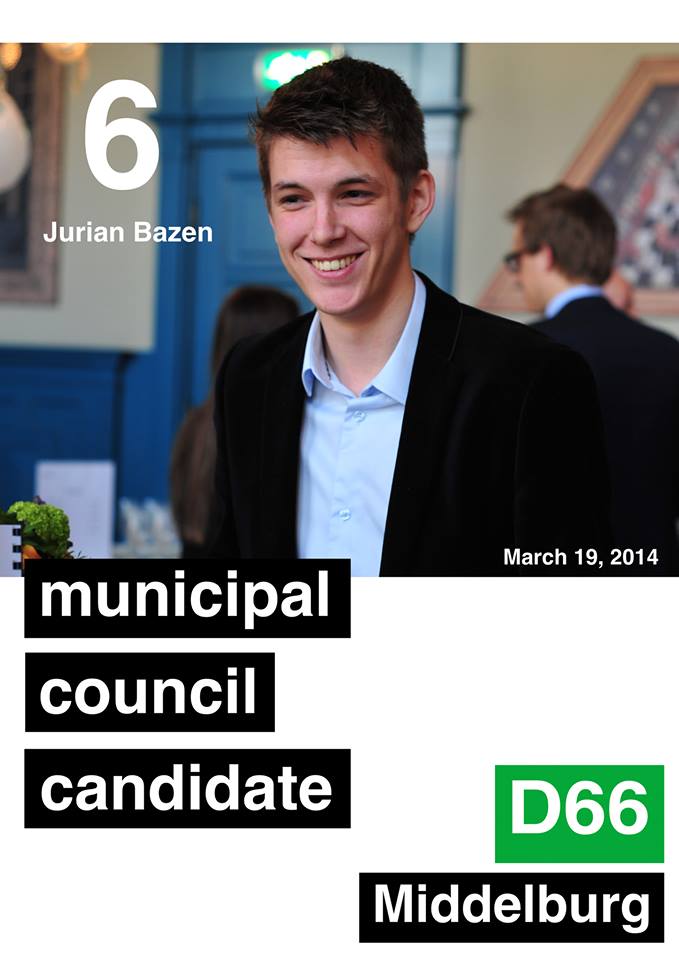 Jurian Bazen, a twenty-one year old International Relations, Politics and Economics major with a minor in Statistics, is running for the D66 party at the municipal elections which will be held on  March 19. He is the first UCR student ever running for a seat in the municipal council. Jurian is a candidate with liberal views who wants to see more involvement between the citizens of Middelburg and the municipality.

While enjoying a sandwich in Elliott (you should go there for your future lunches), Jurian starts explaining why he chose D66, a Dutch social-liberal and progressive party. “D66 has a liberal view on society and that corresponds with what I believe”, he states. “People should have freedoms, which should be respected and promoted.” D66 strongly believes in the universality of these freedoms. “Another priority of D66 is education” he continues, “people should be granted all possibilities to develop themselves as much as possible. The pillars, on which D66 is built incorporate a plethora of views from different political parties. D66 allows you to be more left or right winged, while still upholding the same core ideals.

Jurian grew up in France. Having lived there for twelve years, he has gotten acquainted with other cultures which have taught him how to be tolerant, yet critical towards other world views. “This is why I identify myself with D66”, he adds. He recognizes that politics can sometimes be quite abstract and therefore wants to make it more concrete.

He believes that politics is ultimately about the down-to-earth affairs related to the people. Making politics more tangible, so that it becomes accessible and interesting to everyone is one of his main reasons for running. “Bureaucracy should be more transparent and maybe even smaller. The negative connotation of bureaucracy should be changed”, says Bazen.

Regarding the students’ presence in Middelburg, he states: “In a town that gains a lot of attention from tourists in the summer, students provide stability.” Students’ initiatives, such as the Bagijnhof Christmas Market and the Common House, improve the atmosphere of Middelburg. Jurian believes that the students are a great addition to the community of Middelburg.

As a true D66’er, he is also in favour of Europe. Not only does he believe that a strong Europe can stand against other powerhouses in the East and West, but he also believes that a united Europe brings great advantages to people in Europe. “Think about UCR students, they consist of many different European nationalities. Without the EU, they would have to pay an enormous amount of tuition fee, which would ultimately make UCR less diverse.” Finally he states that “through various EU scholarships, more students are granted the opportunity to develop themselves to their fullest extent”.

“I encourage everyone to vote on March 19 during the municipality election.” He believes that everyone should express their opinion by voting on the political party they identify with the most.

Do you have a question for Jurian? You can send him an e-mail at [email protected] or contact him on Facebook. If you are interested in a political youth party with similar ideals to D66, you can visit the Jonge Democraten Facebook page.

Jonathan, class of 2016, is a Law and Chemistry major from the Netherlands.