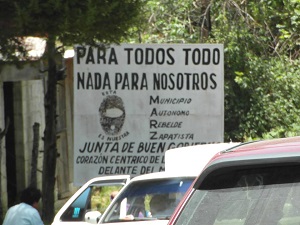 At the end of July 2013, a group of fifteen UCR students went to Oaxaca City, Mexico in the second round of the Going Glocal project. Oaxaca is a beautiful city located in a state of the same name, which, with its fifteen indigenous groups, is one of the most culturally rich places in Mexico.

Throughout the past semester we learned about the social struggles in Mexico and finally about two weeks before the program we received an e-mail from Dr. Vazquez stating that our trip “…is all we could wish to have in terms of visiting social movements in Oaxaca and in Chiapas!” Thus we got to know that we were to also visit Chiapas, the state south from Oaxaca, also home of the Zapatista movement, which was one of the central elements of our program.

During our trip, we definitely met the goal to learn about social movements in Mexico and additionally we enjoyed the full range of what travelling in this country offers – from the famous Guelaguetza festival, great cuisine and marvellous mountain landscapes to lost baggage and food poisoning. The minor problems are, nevertheless, already forgotten while the good memories and what we learned will remain with us for a long time.

Most of the first half of our program we spent in Universidad de la Tierra (Unitierra), which could shortly be described as a place for learning-by-doing as well as from each other, where the people can choose what to study and for how long they want to stay there. These choices are individual and are not determined by a curriculum.

There we met Gustavo Esteva, one of our program’s coordinators and one of the creators of Unitierra. Even though we had read many of his works before, Gustavo Esteva was very exciting to listen to because of his ability to tell an interesting story or an analogy out of every concept, which made it easier to open our minds to alternative viewpoints.

Our program, too, was built around the principle of sharing and learning by doing. We had the opportunity to enjoy learning-by-doing to its fullest extent. Some hands-on activities were included like helping to build a new Unitierra in Huitzo, a town close to Oaxaca. It was done using traditional materials from the surrounding area – earth, hay, a special kind of cactus, and donkey excrement. The excitement of communal work made us forget that we were actually covered in donkey feces.

This was also an act of communal work, in contrast to individualism that is so prominent in our culture. Such activities have, at least to some extent, allowed us to gain insight in what it means to work in a community and have a common goal instead of being competitive, focused on personal achievements and only able to rely on oneself.

However, meeting and talking to different people was what enabled us to discover the most about Mexico. Besides being introduced to the history of Mexico, the problems indigenous people face, and various movements that have been formed, we discussed a lot about the shortcomings of the system we live in and alternative ways of life. Unitierra itself exemplifies an alternative to education by providing its students a space to learn in an involved and joyful way.

Later on we also had the chance to visit and meet people who want to make a difference and be autonomous.  The most prominent of these movements are the Zapatistas: autonomous indigenous communities who are saying “¡Ya basta!” or “Enough!” to the external rule and deprivation of rights imposed on the people under the slogan of development. In a non-violent manner they are fighting to have a dignified, self-sufficient life instead of becoming consumers in the global economy.

Seeing Zapatistas and other movements struggling for the rights to live in their own way brought up the questions: How free are the people in the Netherlands or any other European country to live outside the global economy? Are we able to build our own houses, grow our own food or study what and when we wish?

Maybe after all, the problems we have in Europe, especially now in the middle of an economic crisis, are not that different from the challenges people encounter in Mexico. The way our society is organized actually leaves very few decisions to be made by us.

We saw in reality many problems that neo-liberalism and westernization has imposed on Mexico. For example, soft drinks are more easily available than clean water, which has lead to Mexico becoming the most obese country in the world. Moreover, corporations like The Coca-Cola Company lobby against provisions of clean water supply to people since it would reduce their profit. In fact, following neo-liberal policies, much of Mexico’s public sector has been privatized and now is under the control of transnational corporations.

Another striking example was the wind farms in Isthmus, the coast of Oaxaca state. Under the labels of green energy and investment in the local economy, foreign companies are seizing the lands of people and destroying their traditional ways of life, basically dragging them into poverty.

To put it briefly, the three weeks in Mexico were full of learning, new experiences and different adventures. The greatest part of this trip was probably seeing the real Mexico, the Mexico that is totally different from the one that is visited by tourists. It was an incredible privilege to have had so many people come and spend their time with us. We met people of our age who are defending their rights and struggling to make changes and to free themselves from the global order that tries to impose one way of life.

These initiatives reminded us that even making a difference on a local scale can be significant and showed that alternatives do exist to the pre-made scenario of how one should live and act in order to create the world we want to live in.

Māra Braslava, class of 2014, is a Politics and Sociology major from Limbaži, Latvia.