In light of the release of his newest, and much-anticipated animated film, Isle Of Dogs (2018), it might just be high-time to sniff out the answer to one very important question: does Wes Anderson actually hate dogs?

The seasoned Wes Anderson film-viewer may have noticed, and perhaps has been left utterly bemused, by his (barely quirky, just plain unnerving) penchant for killing and harming animals – especially man’s very best friends.

Take, for example, the charming, otherworldly pastel paradise of Moonrise Kingdom (2012). From the onset, the citizens of New Penzance, the film’s fictitious island, are recognisably prone to catastrophic ordeals. They seem to have a thing for bringing it upon themselves – yet for all the mishaps and mayhem, the film results in just one casualty – one inhuman and inhumane casualty: that of Snoopy, the fox terrier. Then there is poor Cody, who, with a little more luck, endures in The Life Aquatic with Steve Zissou (2004). As if it were not enough that he had to do this on three legs, he was also left behind twice, and worse still, beaten by Jeff Goldblum – in the most ungoldblumly fashion imaginable.

Some avid fans have taken to Reddit to discuss this atrocity, which, for obvious reasons, holds no place within Anderson’s storybook worlds. Some have seemingly dug up an answer that finds itself in Wes’ personal life narrative, positing the idea that it might be based on a similar childhood experience. A redditor has even made connections with the broader theme that underlines many of his films, namely that of father issues, and supposes that Wes has them himself and has projected this experience in the likes of Steve Zissou and Chas Tenenbaum – who also happen to be the masters to Cody and the late Buckley (Reddit: “Does Wes hate animals?”). Alternatively, people have taken this as indicative, rather, of Wes’ own desire to never be a father. Youtuber Luis Azevedo has since put forth a more grounded reading of these dogs’ unfortunate fates in his cinematic video essay, starring a band of dogs musing over their existential worth to Anderson (2018). 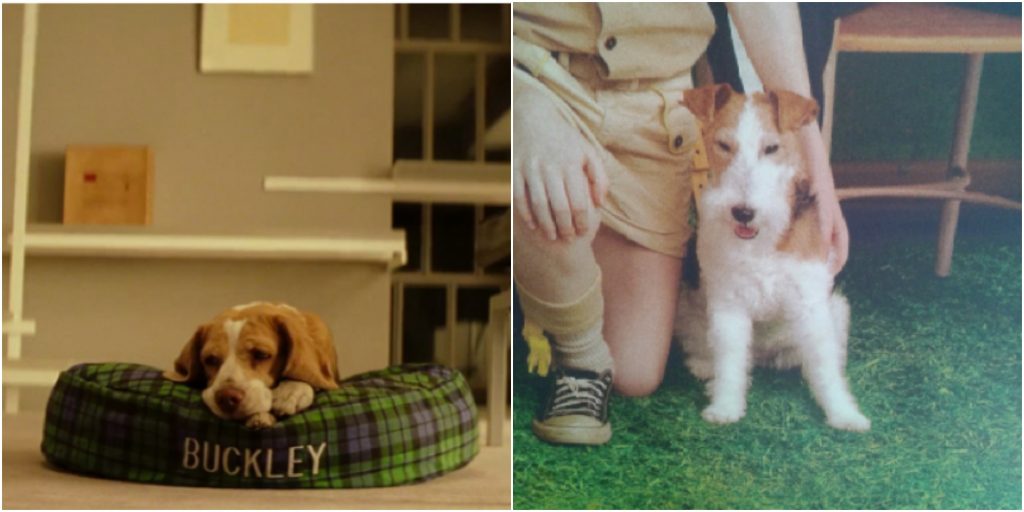 The protagonist doggo of Azevedo’s video laments over the loss of his fellow, Buckley, (former canis familiaris to the Royal Tenenbaums). Surviving a plane crash, one would not expect that he would ultimately suffer under the care of the overprotective Chas Tenenbaum, whose obsessive parenting is shaped by the untimely death of his wife. Yet that is exactly what happens. Perhaps the most painful thing about his death is the irony with which it takes place: leashed to the fences of the Tenenbaum residence, Buckley is killed by Eli’s reckless driving under the influence. What had purposed as something to protect and secure him ultimately prevented him to escape his end. To add insult to injury, the Royal hastily and unceremoniously replaces him with a Dalmatian, Sparkplug. For the rest of the film, however, Sparkplug is not forced to wear a leash.

Buckley, like all other dogs, according to Azevedo’s essay, may seem unacceptably expendable, but in fact all dogs serve as indispensable allegories from which their irrational humans and neurotic watchers may learn a couple of lessons. As cruel as his passing was to us viewers, it allowed the Tenenbaums to come to the painful, yet essential, realisation that “death is coming for you, leash or no leash.” Sure, Wes could have tried a little harder to deliver that message without costing a doggo his life, but one must realise (as did the Tenenbaums) that the pastel-flavoured fantasies of Wes’ World we marvel at and enjoy are not filmed through rose-tinted glasses.

The same idea comes into play in the death of Snoopy from Moonrise Kingdom. While Sam and Suzy seem to assume the adult roles the adults in their lives fail to fulfil, the accidental death of Snoopy and the straight-faced eulogy that ensues is a grim reminder of how fundamentally unable they are to deal with life (more so, death). This points to their refusal or inability to confront their reality as mere children (as real as their love may be). The gruesome end of Snoopy marks the end of childhood innocence, as the children of New Penzance face the bleak consequences of their actions.

The violence against our beloved canis familiaris does not seem a likely fit in the decadent kaleidoscopic dreamscape of Wes, and sounds more like something pulled out of a Yorgos Lanthimos or Quentin Tarantino flick. However, if we take into consideration Luis Azevedo’s video essay and perhaps pay the ornately-detailed, dioramic, and somewhat technicolour-Tim-Burton world of Wes the attention it is due, we may be more able to come to terms with some of our favourite doggos’ deaths, and appreciate the lessons their passing teaches us.

Anderson’s newest Isle of Dogs hits Dutch cinemas on the 10th of .

Still from The Royal Tenenbaums (2001) and poster of Moonrise Kingdom (2012) taken from www.barkpost.com

Gabrielle Gonzales, Class of 2020, is a Literature and Art History Major from the Philippines.