The Upside Down and the instagrammable museum experience 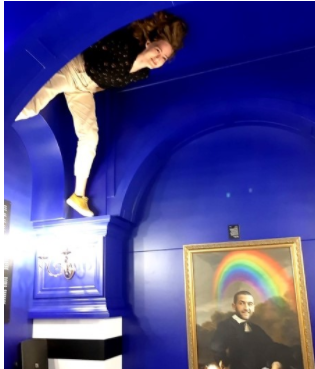 This summer, the largest Instagram museum in Europe, started by a popular Dutch Youtuber Anna Nooshin, opened its doors in Amsterdam. ‘’The Upside Down’’ experience contains 15 rooms filled with 25 decorum and installations, all made for people to take the perfect picture for Instagram. The opening of this grand establishment also marked the third Instagram museum in the city, leaving many people wondering why all these places are popping up. Considered to be an epitome of the death of culture by some, I decided to set out on my own quest to make up my mind about The Upside Down and the phenomenon called the Instagram museum.

The Upside Down claims to be a place where ‘everyone, young and old, will find their inspiration when they step out of their current reality into a new fantasy world …’ Propagating a message of diversity and ´being yourself´, the museum seems to imply that it is accessible and made for everyone. However, the first difficulty in starting my quest was finding someone who would be willing to pay the ticket price, which is 25 euros, in order to help me with my investigation. I began to wonder who the experience is really for.

This question grows in importance when entering the museum itself, as the promise of escapism the place offers is certainly upheld. Filled with mirror rooms and mazes, moving and turning objects, graphic projections, and bubblegum pink lighting, the Upside Down feels like you have either entered the mind of a 13-year-old girl or you are on magic mushrooms. The place primarily felt like the former. There is something irksome about this, as it encourages the stereotype of our generation being aversive to anything that isn´t considered ´fun´, completely focused on the individual and easy to digest. Not to sound like an old man, but the more I walked around, the more I got annoyed by the childishness of it all.

Every room in the museum has its own theme connected to what is called ´The New Dutch´. For example, one room is devoted to the fact that the Netherlands is below sea level (think of a room filled with jellyfish) whilst another displays some Dutch art. By building on this theme, The Upside Down aims to move the image of Dutch culture away from visions of windmills and clogs, in order to show the world a Dutch culture that is diverse, tolerant, and filled with art and innovation. It fits in with the utopian world The Upside Down portrays, one that is disconnected from reality. This focus on Dutch culture also began to annoy me during the walkthrough, as it seems to forcefully be included to add some extra value to the exhibition to make it less superficial. This irritation was heightened by the fact that The Upside Down calls itself ‘a socially conscious enterprise’ with a charity room dedicated to the foundation ‘The Forgotten Child’, where you can take a photo with a giant teddy bear. It is striking that places such as The Upside Down even call themselves museums, a term that is usually reserved for spaces where you can look at art, instead of one where its visitors become the centerpiece themselves.

In some ways, however, Instagram museums can be said to contain less pretense than others. Since the rise of social media, museums have become more and more exposed to people going to see art in order to take a picture in a cool place or to be able to show other people how cultured they are because they went to a museum. Think for example of the artist Yayoi Kusama, whose works are layered with meaning but they also serve as perfect settings to take a photo. Museums such as Voorlinden and MOCO are all too aware of selfie culture, catering some of their art to an audience with a presence on social media. Looking at the Upside Down from this perspective, the Instagram museum has just gone all out, as an extreme extension of the presence of social media in the museum world as a whole.

Despite its positive message of diversity and glittery decorum, the extravagance of the museum could not dissuade me from noticing its paradoxical ideals apparent from its themes and price, nor its inherent narcissism. All-in-all, The Upside Down does raise interesting questions about commercialization and integration of social media of people´s museum experiences. However, next time I am in Amsterdam, I might just stick to a visit to the Rijksmuseum instead. That´s also 5 euros cheaper.

Do you have any questions about Tabula RASA? Please feel free to send us an email: [email protected]
UCR Uncategorized