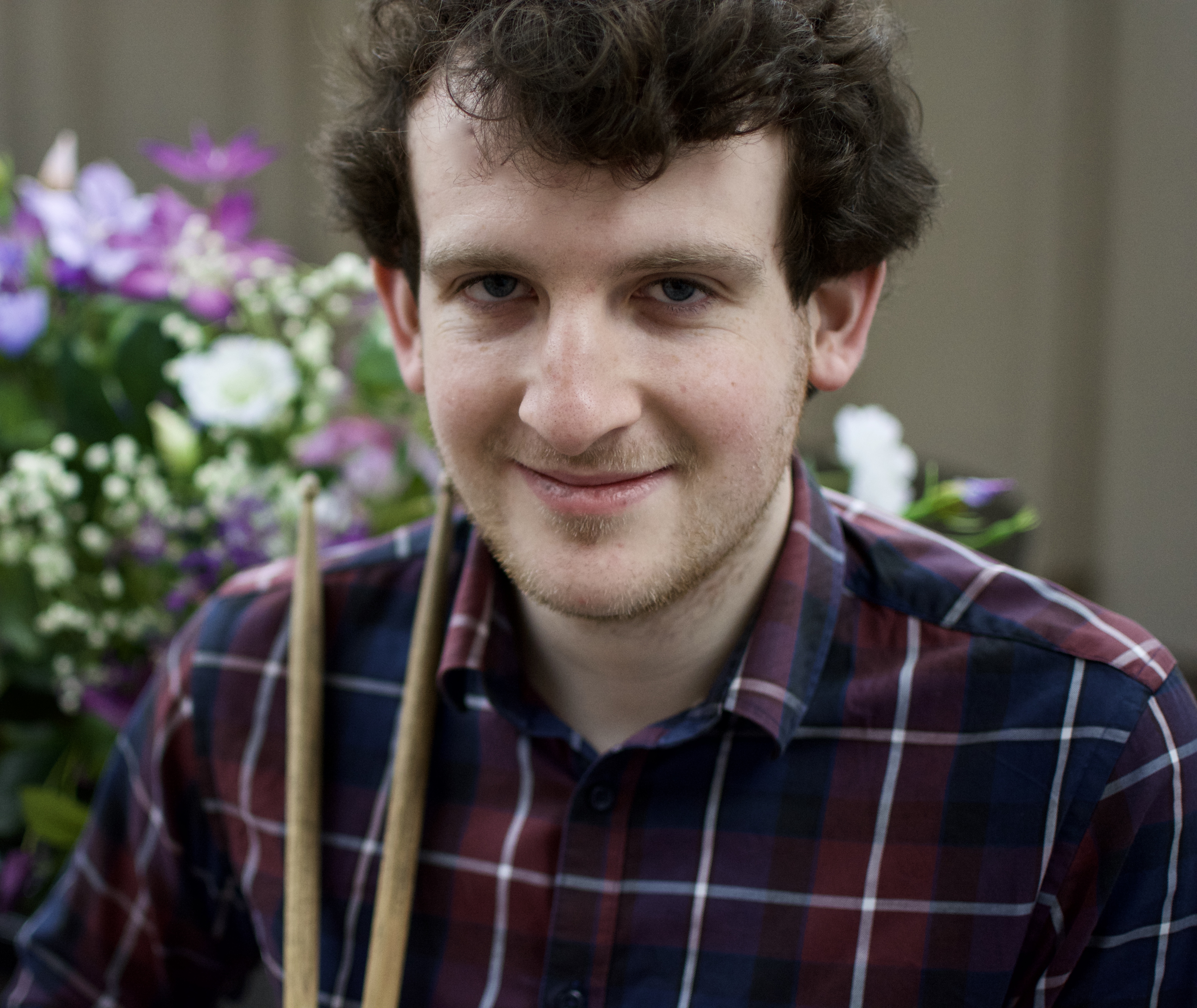 My name is Sam Max. I play drums and percussion.

I’ve played music for almost longer than I can remember, so it’s difficult to think back to when I started. I do remember playing drums in the attic when I was three, playing along to the Beatles. I was trying to play Hard Day’s Night and I just couldn’t move my hands fast enough. I remember thinking if I can play this song, – that’s it, then I will be a great drummer. I ended up pretty much learning the drums from Ringo Starr, it was great.

My dad is a percussionist, and a drummer before that. So there were all sorts of drums and everything lying around in my house. As a kid he made me these tiny little drumsticks so I could hold them in my hands and play. I would tap along to records, and he sort of guided me in that direction. My mom is a professional violinist, but that didn’t stick. It’s the kind of thing where you really need to have the natural talent to start off with. I didn’t have that, and the drums as an instrument really attracted me.

People hear about the drums, and they think that’s it. Honestly, percussion, there’s so much more to it. I also play the marimba, vibraphone, all sorts of other melodic instruments, there’s a wide range there. In that sense, I don’t really feel like I lack the instruments. Having said that, I would love to be able to strum some A minor on a guitar, or something like that.

When I started, I couldn’t remember not doing it, as a kid, that’s as good a reason as any. My dad would practice with me for a half hour every night, my mom encouraged me to audition for a music-focused high school program. I would spend equal, if not more, time on music as on my classes. Most of the people going to that school were planning on going on further into the music world. At that point, I thought, why not, I’d like to be a professional. But music is a hard gig. It’s not a guaranteed living by any means – do I really want to struggle like that for the rest of my life? Music is an escape; it’s like nothing else that I do. I decided I love playing, and I want to keep that love. I never want to resent it.

A practice room that’s completely sound isolated, and nobody else in it! That would be amazing, you could just bash your brains out and not worry about disturbing anybody else. As a kid I would watch rock drummers at stadiums, and I would think, that’s pretty cool. They come off the stage covered in sweat, knowing they did a good job. I guess that would be a fantasy of mine, playing for a ridiculously large audience.

I would say that I can’t ever really separate the playing and the listening. I’m always listening to what is going on with the drums, trying to figure out how things are being done. You listen to music in a different way. But it depends how I feel, what I want to listen to. I’m as happy listening to classical as I am to jazz as I am to pop, hip-hop…it entirely depends on the context. It’s for the pleasure, the atmosphere, the emotion that the music brings.

It’s cliché to say the world disappears, and all that stuff, but it does. It’s an immensely pleasant feeling. When I’m playing, the context kind of disappears. It’s irrelevant. Or at least, I’ve managed to come to that point. When I’m just doing it for myself, I find that allows me to play better. Playing a solo – you’re sitting there, and it’s just you, and you’ve got to give it everything you’ve got. You need to make it interesting. You make the drums a musical instrument. You’re completely within yourself, you’re absorbed.

When you’re prepared, and you’re doing what you’re doing well, it’s wonderful. It can be less fun, I’ve definitely experienced the pressure. But the technical facility that you have, that you know you can depend on, it feels fantastic to be able to use that. When you get to that point, and you work at it, it’s amazing. You think – I can do this. That progression, it’s a great feeling.

I once played half a concert with half a stick. The stick was broken, and I flipped it around so I was holding the broken bit, so the non-broken bit was hitting the drum, so it was all still making sound. But the broken bit is really sharp – my hand was covered in blood when I finished, I was pulling all these splinters out. That’s probably the most traumatic. At the time I felt very hardcore, but in hindsight, I really should have just had a spare pair of sticks.

The work ethic that comes with music, it really pays to be diligent in all aspects of life. Having the self-discipline to lock yourself away for a certain amount of hours every day, not being satisfied with something until you know it’s perfect, and you know you can do it, and repeat it. Having that drive towards perfection, and not being afraid to step back, slow down, knowing how to find your way when you’re feeling overwhelmed. That’s something that’s absolutely relevant, and was really drilled into me by my teachers.

I’m in a few UCR bands, and we’ve been looking into all sorts of new material. In the jazz band, there’s the challenge of delving into the rich world of jazz and trying to find what suits our instrumentation, and working on that to try and make it authentic – really getting that feel. I’ve been working on a few different things in preparation for my final performance exam in England, including Higher Ground, originally by Stevie Wonder, and a version of Bruno Mars’ Treasure. Whenever I come back from lessons, I also make an effort to work on different technical things, to keep the hands moving.

Hard drugs, maybe? I think I would probably become more obsessive, probably too obsessive, with the other things in my life. Music is a good counterweight; it keeps you on an even keel in multiple respects.