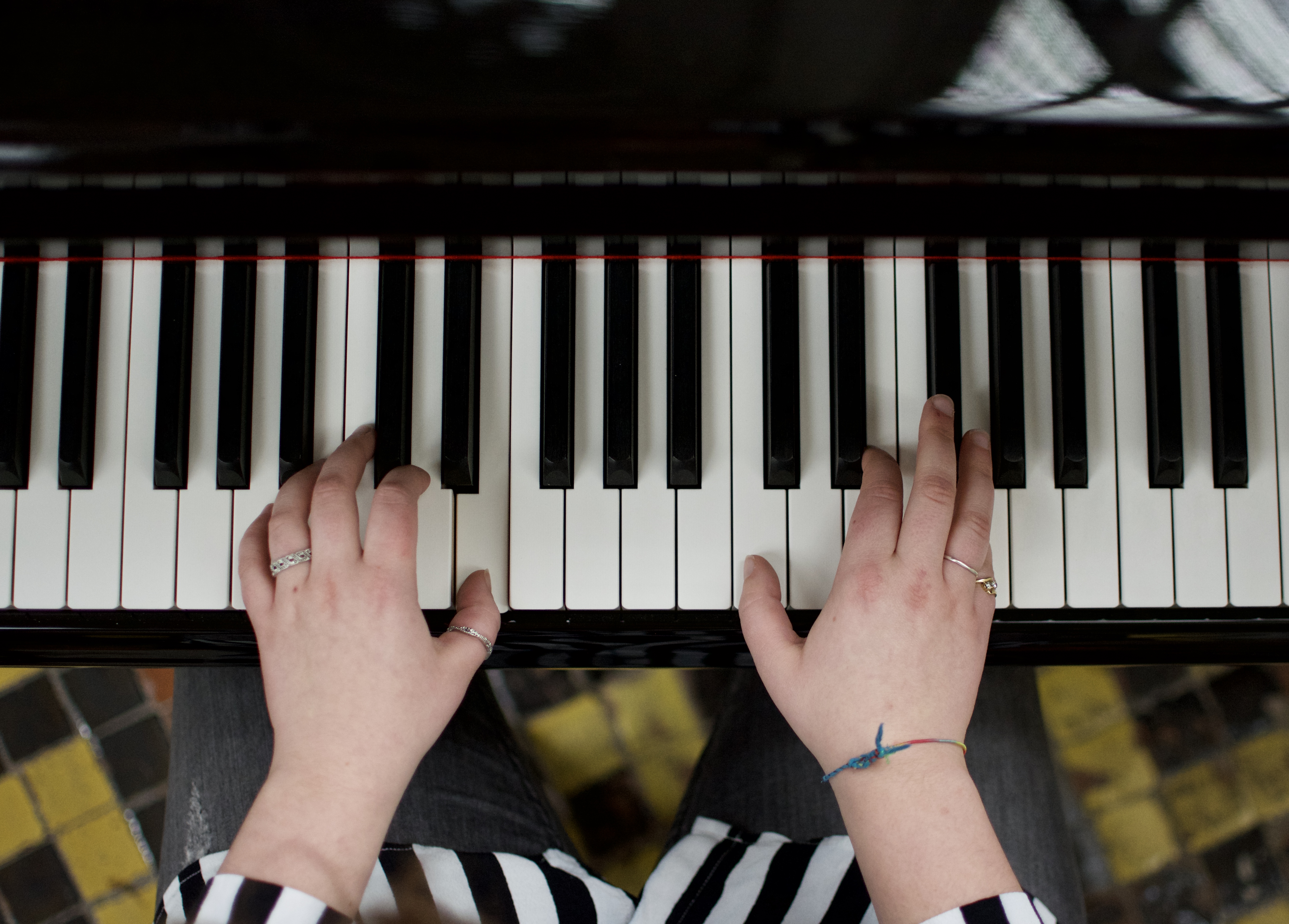 My name is Anne van Roozendaal. I mainly play the guitar, I sing, and I play a little bit of both the piano and the ukulele.

My parents did a sort of experiment with me, when I was not even born yet. They played Street Spirit – Fade Out by Radiohead, quite a lot when my mother was pregnant. When I was born, every time when I was angry or very hyper, they would play it, and I would calm down. While it not might be my earliest memory, whenever I hear this song, it still has an impact on me. It’s kind of my earliest song ever.

My dad was a bass guitar player when he was younger, and my brother played the guitar as well. I really liked the instrument, and I thought, if I want to sing, and I have to have an instrument accompanying me, and I want to play it myself…I decided that the guitar would be the nicest. I bought one, and I was immediately sold.

I’ve always wanted to play the drums. I try sometimes, but I don’t really think I could do it. I love the drums, but they make so much noise – I was never allowed to buy a drum set at home. Or maybe learn to actually play the piano.

I definitely play music for emotional reasons. The process is really connected to the way that I feel. If I’m happy, I can sing along to happy music, when I’m sad, I write songs.

I suck at writing happy songs, I’ve tried. I always end up with minor chords – I don’t know why, but I just can’t do it. When I’m writing, it starts out as a kind of poem, and then I look for music to go with it, a nice melody. Then I put it all together…. the result is always relaxed; it has a singer-songwriter type of feel. I find it to be a super mellow way of expressing myself. 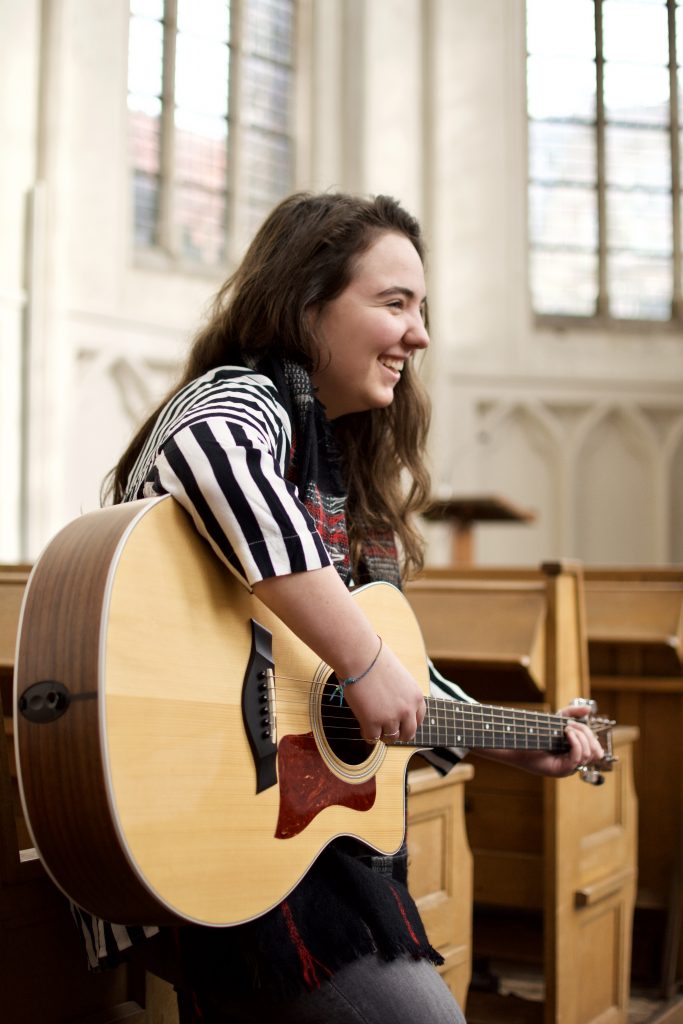 At some point I would like to release an EP with my own music – which is scary, but it is something that I would really like to achieve. I’ve been recording for a while, but it never really got anywhere. It’s something personal, and it would be an awesome accomplishment. It requires a lot of effort, but it’s definitely something I would like to work towards.

I would love to also play more with my band, Jumpers for Penguins – we really like to perform as a group, and it would be great to play for bigger crowds. But again, time, effort…

I listen to a lot of different music, basically anything. I’ve been listening to a lot of Arabic and African music lately. Besides that, there are so many artists that I like to listen to. The Arctic Monkeys, more of their older stuff, The Beatles, Bob Moses, Aquilo, Foo Fighters, Radiohead, Nirvana…a lot of classics, but also a lot of bands that are not so well-known yet. I really like discovering new music, from friends, or concerts, or festivals. Kendrick Lamar, Flatbush Zombies– I really love rap as well. Really, basically anything.

It’s really something that takes away whatever you were thinking about before. If I’m super stressed, I’ll just play something for a bit, and I just kind of forget about that stress. It’s relieving, it’s super relaxing. Kind of therapeutic.

That said, writing music is something that needs to just happen. In my experience, I can’t ever really make myself write something. If I force myself, the end product is not that great. If I write something just because I feel like it, then I always end up with a nice feeling. Once I’m inspired, I find that I can just do it. Maybe that’s what makes it so relaxing, I don’t have to try.

I was in a car in Luxembourg with a few of my friends. We were driving on the highway, and we had a pretty bad crash. During the crash this one song was playing, and that really remains stuck in my mind. It was super dramatic, it was such a weird experience. The song really seemed to slow down, as we got closer hitting something. The whole thing felt like a movie scene with background music, the song really fit with the accident. I very much still associate that song with the memory.

I still listen to it, actually.

When it comes to singing, if you’re not confident, you won’t reach the notes. If you don’t put everything in it – even pretending to be confident is better than not doing anything at all. I started off not wanting to sing in front of people, not wanting to sing loudly. You just have to do it regardless of whether or not you think you can actually do it. Singing has taught me to be more confident, for sure. Before, I never would have been able to just talk, in front of people, or sing, in front of a thousand people. I could never have even seen myself doing that.

My friends have also helped me to develop as a musician. A lot of times, I’d be almost forced into performing. It was really due to fact that they believed in me as a singer that made me feel confident enough it get on stage. Positive reactions definitely helped me to feel like this is something that I could do again and again.

I just wrote my first Dutch song, which was a bit of a struggle. It’s a way different experience than writing a song in English. I’m still trying to figure out whether I want to continue writing both Dutch and English songs, because the two are definitely different!

I’m also working with two Syrian friends, as well as an Egyptian friend of mine. Together with some other students from UCR, we’ve tried to merge that into something that is both Western and Arabic, and with a tint of African beats as well. We really want to bring these different cultures together, and just enjoy the music. We’ve already performed once, and I would really like to see that continue.

There’s almost no moment when I am not listening to, or thinking about music. It just feels right. I’m constantly involved with music, even when it’s just in the background. I can’t really imagine a world without music. I just wouldn’t be myself without music.