Past Wednesday, the Keuzegids, a guide comparing the quality of Dutch higher education programmes, was released for 2018. Whilst not all of us may be familiar with it, we are likely to recognise the golden ‘Top Rated Programme’ seal that has prominently featured on UCR’s website for years. However, our front page may go without this certification from now on. UCR has scored lowest of all university colleges (UCs) in the Netherlands, losing its golden seal. The question is: how relevant is this ranking? 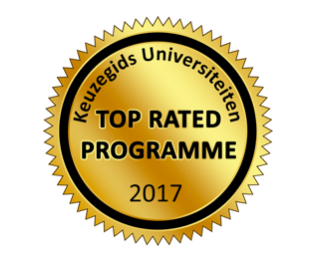 Keuzegids compared ten UCs: Venlo, Maastricht, Groningen, Den Haag, Enschede, Tilburg, Rotterdam, Utrecht, Amsterdam, and Middelburg (listed in order of ranking). All except for UCR received a ‘Top Rated Programme’ certification, meaning they scored above 75 out of 100 points, the average of all universities being 60. UCR received 68 points.

These points are compiled out of ten criteria. Eight of these are based on student evaluations, one on expert judgement, and one on the survival rate of first-year students. The latter is derived from numbers of the Dutch Association of Universities (VSNU) and based on the percentage of students who continue with their studies after the first year. UCR’s plus means that we do better than the national average in this regard. 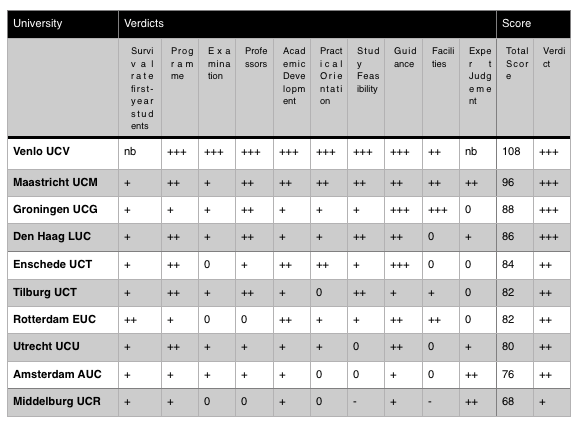 The eight verdicts based on student evaluations, listed below, are rated in a system ranging from — to +++, with 0 as average, based on the national mean of all universities. This data was taken from selected questions (38 out of 100) of the National Student Survey (NSE).

To check how relevant these scores are, we must take a closer look at the questions behind the data. The first five results listed are relatively straightforward when it comes to the questions behind them (the full selection of the questions can be found on Keuzegids’ website). Three of them, however, have stagnated in points: both ‘programme’ and ‘academic development’ went from three plusses to one plus since 2014 and ‘professors’ went from two plusses to average since 2016. The criteria ‘examination’ and ‘guidance’ were added for the first time this year. That being said, the last three results are interesting to more extensively discuss. 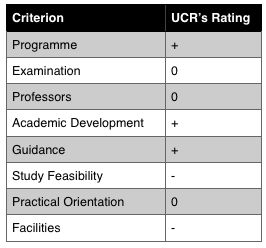 As study feasibility has always been a prominent concern on our campus, a below average score is unsurprising, especially considering stress levels. When looking at the source of this data, however, one can see that we do not score poorly on the questions at hand: 3.7 / 5 on ‘time table’ and 3.4 / 5 on ‘workload’. UCR scores below the national average, but still not performing all that badly.

For practical orientation, UCR’s average rating is most likely to blame on its preparation of students for the job market. Whilst this result is partly based on questions about critical learning and argumentation, it’s also partly made up of preparation for a profession. Few of us will have come to UCR expecting a smooth ride into a career: part of the Liberal Arts and Sciences approach means that half of us still do not know what we want to do after three years. Therefore, it makes sense that UCR scores lower in this regard.

Lastly, we come to a critical point for our university: facilities. As much as we like to seize the opportunity to reflect on our campus, housing is not part of the data considered for this result. Instead, the minus reflects upon the quality of our classrooms, study spaces, library, ICT facilities, and digital learning environments. These are topics that have continuously been criticised by students and faculty alike and are deserving of that minus, but they are also topics that are actively being reviewed by management as we speak. Yet it is important to note that it is not the criterion ‘facilities’ that devalued UCR this year: since 2013, UCR has scored average or below average on it.

All in all, a student survey is a tricky method for evaluating a university. UCR prides itself on educating critical minds, but what happens when those minds are asked to reflect on their own university? It might very well be that UCR’s students are more critical than average students, which could result in a lower score.

There is one more result to be discussed: the expert judgement of UCR, which notably resulted in the highest score possible in this category, a double plus (very positive). This verdict is based on the report of the Dutch-Flemish Accreditation Organisation (NVAO), an independent body evaluating the quality of higher education. UCR fulfilled all criteria of the NVAO report, receiving several ‘goods’ and even one ‘excellent’. This positive assessment is from 2013, though, and back then was still in line with student evaluation, together forming a total score of 88 points. The new accreditation, which is to happen in the nearby future, will cast more light upon current expert judgement of UCR.

After all the data and verdicts, there is something to be said for the argument that what shapes our college is not our criticism of it, but rather how it responds to that very criticism. By that criterion, UCR has been performing admirably. Our management has opened itself up to student input via info sessions, public spheres, and personally attending student events. Regarding facilities, it is redesigning classrooms (like putting new chairs in Theodore), pursuing more study spaces (for instance by opening up Eleanor on Saturdays), improving ICT facilities (just try to use Wifi in the Burgerzaal now), and replacing Workspaces with Moodle. Visible steps are being taken.

Ultimately, UCR is going to have to cope with its loss of the ‘Top Rated Programme’ certification. Expert judgement has remained the same but is therefore most likely outdated at this point. Student evaluation has been consistent in its negative assessment of facilities, but since 2014, there has been a decline in the scores of the programme, the academic development, and the professors. Perhaps UCR is indeed following this dropping trajectory in terms of quality; perhaps UCR’s desire for critical students has backfired.

But we should be careful not to jump to drastic conclusions, because our college maintains a higher score than the national average, our college is rated favourably by experts in the field, and our college is undertaking measures to improve.

We should never lose the desire to improve upon our college and turn our critical minds back to UCR. Every once in a while, however, we must remember to be critical about national university rankings themselves as well.

Faye Bovelander, Class of 2018, is a Politics and International Law major from Delft, The Netherlands.