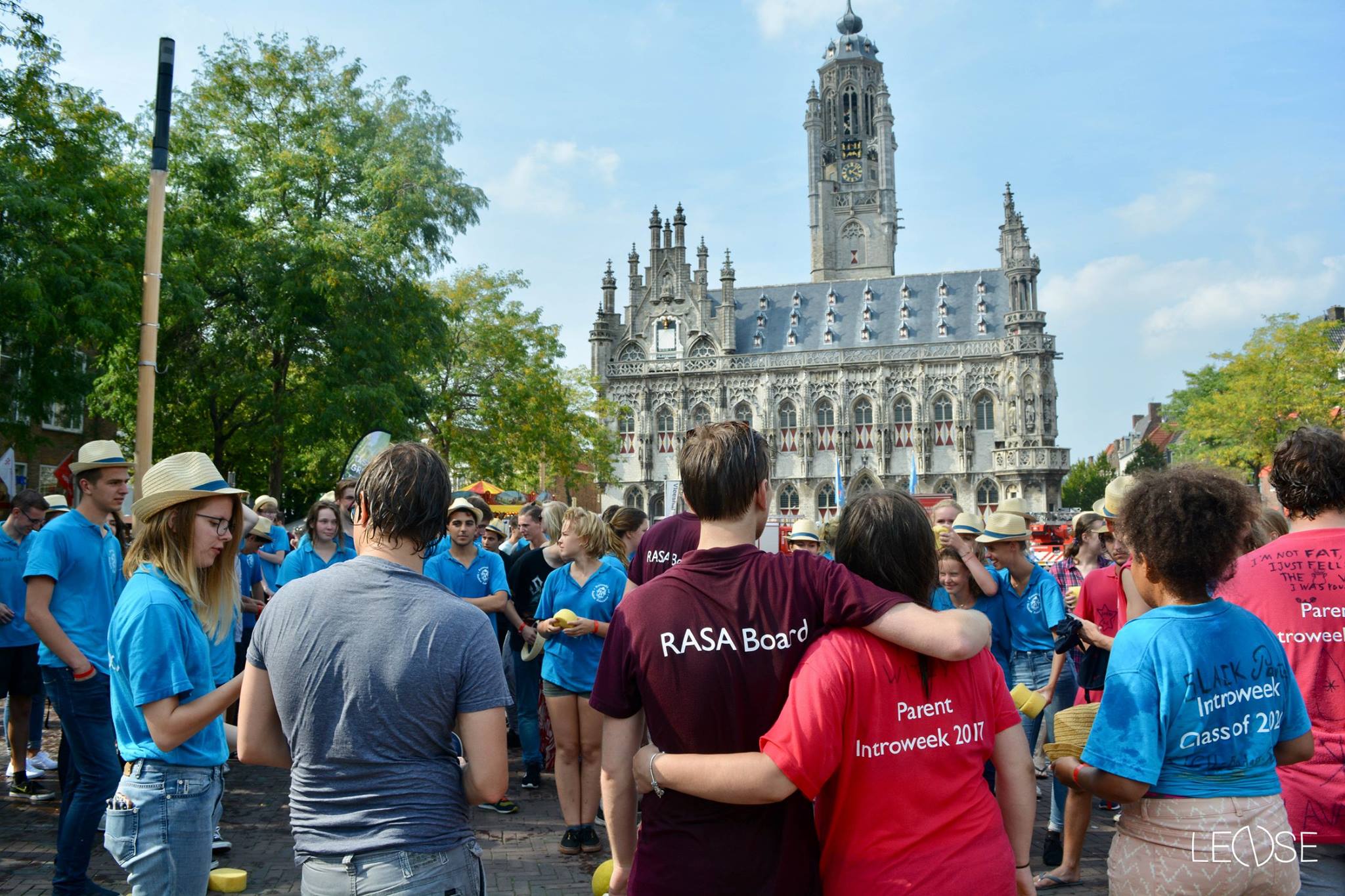 A medium-sized news-and-gossip hurricane raged over the UCR campus on Friday, after Dean Bert van den Brink announced in his weekly column that UCR’s Introweek is to undergo some drastic surgery.

TR has done some research, taking into account UCR student and alumni public comments on Facebook, and having attended the RASA info session. Read on to learn more about the Management’s hopes for the new Introweek, as well as some initial student concerns. Hopefully this overview proves helpful, and we can all work together to bring on a successful Orientation experiment.

Let’s start at the very beginning.

Introweek is reevaluated each year. Over the past few years, and as indicated in several reports, UCR’s Management has come to believe that there is a gap between Introweek and the first day of academics. They believe that the transition between the last party on Friday and your first 8:45 on Monday is too much of a sudden jump into the deep. An evaluation report from about a year ago sums up that students are not introduced to Workspaces and Moodle, that they don’t know where the offices are, and that confusions like these lead to significant problems for students as they get started with their first semester.

Furthermore, the Dean has stated in his column that, “we know from some recent statistics crunching that students who first come to UCR have very diverse backgrounds; even more diverse than a couple of years ago. Because these backgrounds are shaped by the different educational systems they come from, new students expect very different things from our Liberal Arts and Sciences program.” Based on this, and on data about preparedness for the program taken from the National Student Survey, UCR has concluded that this situation deserves attention.

The way that they decided to shape a solution to this problem was to take elements from the way Bard College introduces incoming students to their curriculum. Dr. Anya Luscombe, who has been our Director of Education since the start of the academic year, had a positive experience teaching at Bard College last year. She saw how the Bard three-week ‘Orientation’ program incorporates elements of academics in workshops on Language and Thinking, as well as organizing advice and consultation sessions with faculty. Thus the decision was made that UCR should try this out as well: a two-week introduction and orientation period that would have a stronger academic focus in order to prepare students for a liberal arts and sciences education.

In his column, the Dean stated the following: ‘the Board of Studies, RASA and UCR Council and Program Committee have come to the shared insight that we would have an even better Introweek and Orientation period if we’d bring a stronger pre-academic program to the period before classes start.’ Here is where the issues originated – this statement was not fully true, as RASA has disagreed to the proposal since the beginning. This goes back to the 2016-2017 board, who also advised against an Academics Orientation week as proposed by UCR’s Management.

It is important to note here that RASA is not a legal decision-making body when it comes to anything UCR related, and UCR does not need their approval to put the plan into action. However, this led to a bit of a surprise when students started noticing that the Academic Calendar on Intranet had already been changed to indicate an earlier Introweek start date (on August 13), and naturally went to RASA with their questions. This is how RASA found out about the plans around the mid-February, and on the 20th of February they had a meeting with the AAC and Management to discuss this.

As of now, after a few more meetings, some quite tense and others more constructive, the division of two weeks will be as such: RASA will take care of the first part of the Orientation period, and UCR the second. Firstly, during a four or five-day period, RASA will organise their own activities and parties, just as we know them. Then, after the weekend, UCR will carry out their academic week. An implementation committee is in place, consisting of Dr. Anya Luscombe, Jelle Hubertse (RASA), Azamat Omuraliev (AAC), Jeannette Gels.

Opinions, ideas, and protests have been coming in since the publication of the Dean’s column by Tabula Rasa on Friday. The online reactions showed around a 50/50 divide in terms of positive versus negative attitudes. A few international alumni shared that they were in favor of an intensive academic introduction, believing that this would have been effective in introducing them to the European education system. Others found the proposed changes to be ‘unnecessary.’ The Dean got involved in the comment section, and again referred to the alarming trend that the National Student Survey showed in the category ‘preparedness of students for the program.’

On Tuesday evening, the RASA board organized an info session for students about the upcoming changes in the Introweek period. The info session attracted around 50 students, barely fitting inside the art room in Eleanor. They held an open and honest presentation, containing most of the information that has been mentioned before in this article.

When the time came to ask questions, hands kept rising into the air, and the public did not refrain from making loud comments. The first question that was raised was immediately one that made people stir and call out their support. Joost Hoekstra asked the big ‘why’ question. Arguing that UCR has the 130 and 110 courses for specific reasons, namely to teach students how to deal with academic writing and thinking, including how to cite, how to look for sources (trips to library and use of Picarta) and, indirectly, how to use the printers and Moodle.

Furthermore, Roemer Faber added, “the first whole week of the semester is already kind of the week in which students ease into things – classes consist of going through the course outline where the teacher explains what is expected of you. And you have more than enough time to check out (the few) school buildings and facilities that you will need to survive UCR.” To this question, RASA Chair Jelle Hubertse could only answer that UCR had informed them that they based their decision upon more student-data that they did not wish to share publicly.

Curious, we looked into the questions of the National Student Survey that could have given information about student preparation for the program. There is indeed one category, which asks students to reflect upon the content of their education; how this content fulfills the students’ expectations, and how well the bachelor connects to your previous education (high school for most of us). It is difficult to connect ‘preparedness for the bachelor program’ specifically to these questions.

Expectations are all different, but the source of most of our expectations trace back to UCR’s recruitment strategies, and the information prospective students seek and receive before applying to UCR. High school can prepare some students better for essay writing, and others better for debating, but that will always be the case. As a student that has filled out the survey for three years now, I also couldn’t remember that I had ever rated the way in which I felt prepared for UCR based on the institute itself. Yes, I have rated the quality of support that students have access to, the study load, and the quality of professors, but not how prepared I felt to take on the system in itself.

The only other category that contains questions that could have given UCR some insights into the way students feel ‘updated and informed’ about their program is the category that focuses on information provided by the institution. Included here are questions about study progress (as is provided by van den Doel’s “Academic Planner”), rules and procedures (Introweek Day 1: Read the Student Handbook), and information about the structure of the program (recruitment materials, Student Handbook, AAC, and of course, the UCR website).

All in all, it seems like the problem UCR has identified still feels a bit ambiguous. It is clear why students at the info session were asking for more insight and answers from the Dean. This was furthermore after the Dean had been getting involved with answering anonymous complaints on the “Roosevelt Confessions” page, which did no good to the seriousness of the topic and his online presence.

Halfway through the evening, a discussion unfolded about a wide range of topics and questions connected to the new schedule: the compulsoriness of the Orientation period. Students wondered how the two weeks would play out if more students decided to show up only for one: RASA’s Introweek is not obligatory; will the Orientation week be the same? The week will not be graded, nor do students get credits for it as it is before the start of the semester, but will there be repercussions if students do not show up? This could be answered by setting up a test Orientation period during the Spring Introweek. A smaller group to practice on would be less of a risk, and ensure that the new RASA and AAC boards would have already gained experience from a traditional Introwek before taking on this new challenge.

There seemed to be great consensus over the fact that three days would be more than enough to give student more in-depth information about program-specifics. Bloeme Hulsman stated that, “if you want to be as fully prepared as possible it has to come from yourself. All the information is there, you just need to make yourself familiar with it and that is everyone’s own responsibility: it feels a bit pejorative if UCR insists on ‘holding your hand’.” Other critical questions addressed the fact that the Strategic Plan did not contain any notion of this specific problem and its solution – how will UCR account for these costs and changes if there are already so many new investments and big plans on the agenda? What’s at the top of the priority list at the moment?

Nearing the end of the info session, people’s tempers seemed to have calmed down after they got to terms with the fact that it’s a fair plan for UCR to experiment with. It then turned into a brainstorm session, where students shared ideas that could help improve the week of activities during the Orientation period. A strong sense of involvement was noticeable amongst the gathered group, and a call for a new Public Sphere was met with great enthusiasm. The latest news is that the idea for an open floor was met positively by the Dean, and in this week’s column, he admits that mistakes were made with regards to the communication of this new plan in the first place. He concludes that we should start looking ahead, but first enjoy some time off: and that is something that we can definitely all agree on!

Gerjanne Hoek, Class of 2018, is a Politics, History, and Linguistics Major from Bunschoten Spakenburg, the Netherlands.