Artist series pt.2: Colouring the Visual Through the Auditory 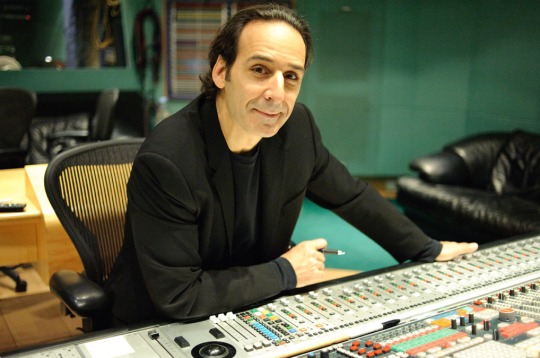 As one of the many lovers of Wes Anderson’s films, the thing that I especially appreciate about Anderson is his collaboration with the composer Alexandre Desplat, who produced the score for multiple Wes Anderson movies. I wish to discuss two of those scores: that of Moonrise Kingdom (2012) and that of The Grand Budapest Hotel (2014), as I love the specific contribution the soundtrack makes to these movies, and its importance in having Anderson’s plot and colour palette stand out visually.

Desplat is a well-known composer in the film world, and has built up an impressive resume, having written soundtracks for the last two Harry Potter movies, The Curious Case of Benjamin Button, and The Shape of Water, the last for which he won an Academy Award. His work for The Grand Budapest Hotel was furthermore awarded an Academy Award.

For Moonrise Kingdom, Desplat has written an entire suite called The Heroic Weather – Conditions of the Universe. The score consists of 7 parts, all of which reflect the story and its accompanying visual scenery: A Veiled Mist; Smoke / Fire; The Salt Air; the three-part Thunder, Lightning and Rain, and After the Storm. The entire score is built around a simple recurring motif, played by harp, guitar, and organ (the melody is shown in the picture below). In A Veiled Mist, every single instrument, apart from the ones that play the main theme, is attributed a different motif. In this particular part, the instruments are introduced one by one; every instrument gets the chance to “introduce themselves”, in a way, before the instruments come together and play simultaneously, creating the final rich sound of the score.

Source: own transcription – main motif of The Heroic Weather – Conditions of the Universe

The first part of this score is only heard once the two main characters of the movie, Sam and Suzy, both run from their homes to go on an adventure together. As the plot progresses, the music follows along, increasing and decreasing in dramatic quality and number of instruments in order to align with the film’s events. The motifs vary slightly in timbre and rhythm during the course of the film, exuding a familiar sound that is adapted to fit the particular situation the characters are in.

Desplat’s score is not the only music that is part of the soundtrack, as a noteworthy feature of Françoise Hardy’s Le temps de l’amour is played when Sam and Suzy have an intimate dance on the beach. However, the key moments of Sam and Suzy’s relationship are still musically expressed by Desplat; whether this is at the moment Suzy wishes she was an orphan like Sam – “I love you, but you don’t know what you’re talking about” – or during the culmination of tension when the two are forced to flee from the scout’s camp as they are hunted by – basically all – of the other characters. 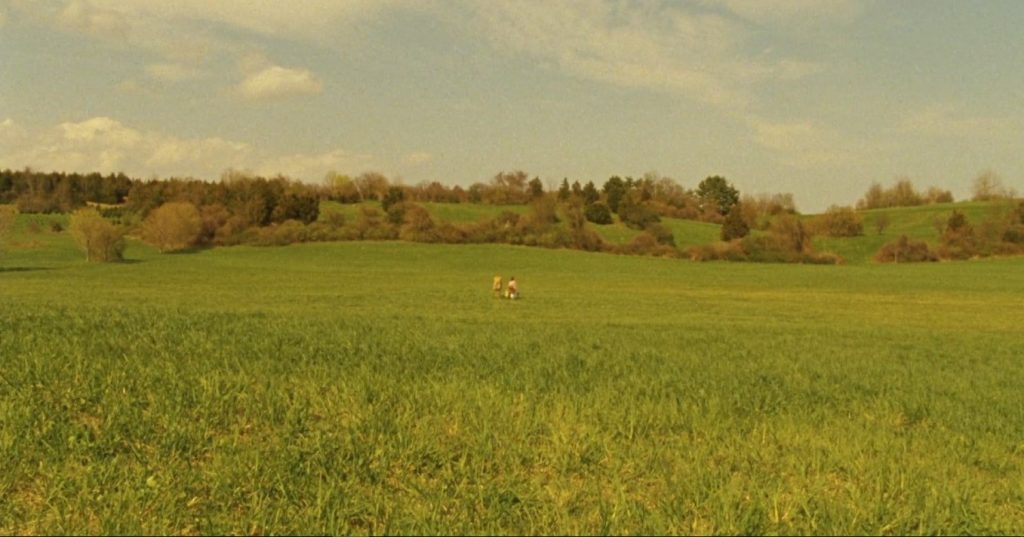 Still of Moonrise Kingdom: Sam and Suzy start their travels as they are walking through a field, sun shining, wind blowing, accompanied by a solitary gentle harp: their adventure awaits, but for now, all is well.

Desplat’s score truly captures the environment of the film: the woods, the fields, the water, and their colours. We hear the woodblocks, almost as if we hear a bird tapping its beak against a tree, when Sam and Suzy are hiking through the woods. As they are getting closer to their destination, the number of instruments increases, and the music bursts out; we hear expressive drums, piano, bells, and celesta as Anderson shows us a full 360 shot of the camping site which the pair is setting up. As Suzy and Sam spy on a deer, the music immediately quiets down to a harp, guitar, and a subtle triangle. Later, we hear urgency in the percussion section, accompanied by trumpets, when the storm is at its worst and the dam breaks, leaving the scout camp in a dangerous position.

Especially worth mentioning is the final part of the suite, After the Storm, which only appears during the credits, in which we hear A Veiled Mist again. This time, however, the voice of a young boy introduces all of the instruments to us: “now we will demonstrate the orchestration of Mr. Desplat’s musical suite. A little metronome sets the time. First, the harp…”. We can assume that the introduction of the instruments by the boy is a metareflective nod to Desplat’s choice of instrument, as it shows the awareness and specificity with which Desplat composes. However, the score remains subtle, and the choice of instrument and motif are not foregrounded overall – it is subtler than the third-party songs that play a more prominent role in their allocated scenes.

Although the score for The Grand Budapest Hotel consists of individual songs rather than one entire suite, the choice of instruments is, once again, vital. In an interview, Desplat states that he specifically chose mandolins to represent the main character’s personality: “it’s all the mandolins that are doing this tremolo, and this creates a trembling, so it’s a bit solemn — because M. Gustave has solemnity and elegance” (Blair).

One of the antagonists, J.G. Jopling, is musically accompanied by dissonance, dramatic organ sounds, and a male choir that takes on the role of the percussion section. Similar to Moonrise Kingdom, the organ, the choir, and the percussion represent a sense of urgency, of being hunted, of running out of time. The hunting in The Grand Budapest Hotel, however, is much less innocent plot-wise, and therefore much more accentuated by auditory elements. Overall, the score situates itself in a foregrounding position.

There is a hilarious section in which M. Gustave and Zero are in a search of another character that has crucial information, which could save their lives. In this sequence, they have to manoeuvre between being helped and hindered by other characters, something that lies far beyond their control. “Are you Monsieur Gustave of the Grand Budapest Hotel in Nebelsbald?”, is asked, after which they get a specific instruction with no time to even think “what in the world is going on?”. It is a rollercoaster of hopefulness and immediate disappointment, ultimately ending in a sled race after Jopling. Just before this sled race, there is a scene when Gustave and Zero enter a monastery disguised as monks – “are you Monsieur Gustave of the Grand Budapest Hotel in Nebelsbald?”, is asked again. “Put these [clothes] on and sing.” The music transforms into a quasi-Gregorian chant, quite ironic considering that M. Gustave is everything but a devout monk, and knowing that the pair does a poor job of singing the religious songs. It is superbly witty, and the sound perfectly fits the visual. Personally, it is one of the best pieces of film I have seen in my life, and the great music – specifically the song Canto at Gabelmeister’s Peak – is largely responsible for that. 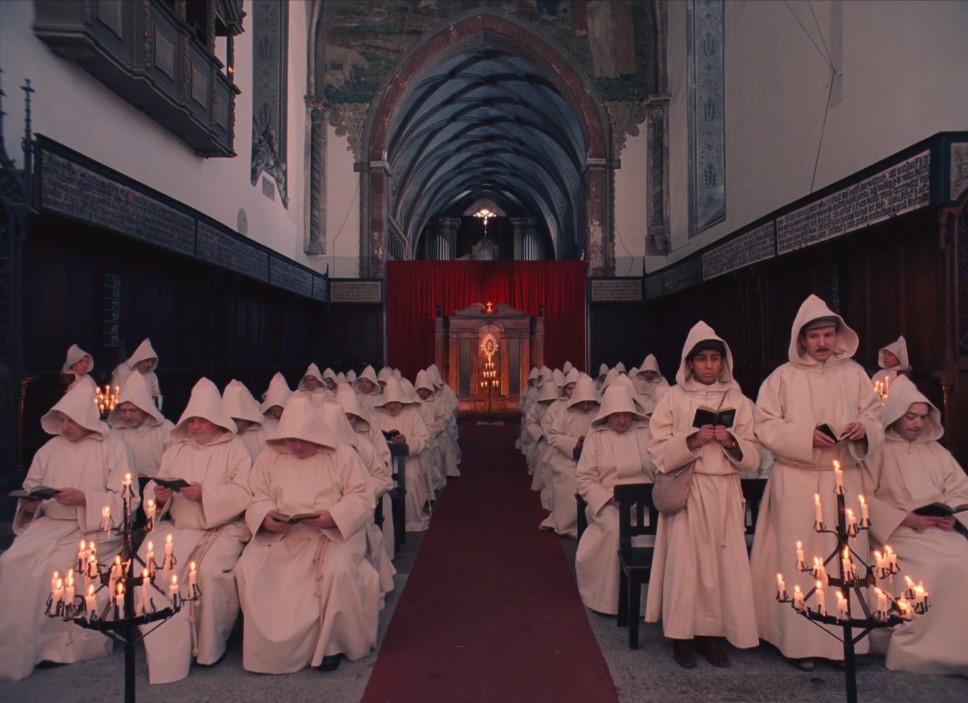 Still of The Grand Budapest Hotel: M. Gustave and Zero barely fit in with the other monks.

Anderson as a filmmaker is appreciated for his use of certain colour patterns and the numerous tiny visual details we can see in his work. The attention Anderson pays to visual detail is synchronized with Desplat’s careful and deliberate choice of auditory detail. Where Anderson chooses a range of colour shades, Desplat chooses a range of instruments. It is why Anderson and Desplat’s creative visions complement each other. The attentive viewer will notice different the small touches to the visuals each time they watch a Wes Anderson movie; the attentive listener will do something similar with Desplat’s music. Desplat shares his eye (well, ear?) for detail with Anderson, and the two make an excellent creative pair. A cable car will, for example, swing and squeak in time with the music’s rhythm. It is subtle, but noticeable enough to be appreciated; and knowing Anderson, it was definitely not done by accident. Other than that, the score is essential to the The Grand Budapest Hotel’s wit and shaping of character, even more so than in Moonrise Kingdom.

Wes Anderson’s most recent work, Isle of Dogs, also features the music of Desplat. I have yet to see it, as it is not yet officially released in the Netherlands, but it is safe to say that I cannot wait. I am counting down the days until I get to see Anderson’s and Desplat’s collaborative genius again, and I hope to appreciate it just as much.

Geertje van Raak, Class of 2019, is a Philosophy and Musicology Major from Tilburg, the Netherlands.