Parietal Art or an Incursion in a Prehistoric … « Museum »? 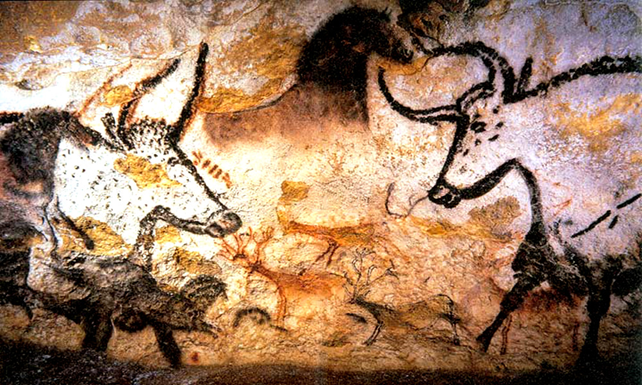 The cave of Lascaux, in Dordogne, France, is probably the pinnacle of parietal art. Discovered in 1940 by Marcel Ravidat, Lascaux is now closed off to the public to help preserve the many artworks visible on its walls. What is the reason for this you might ask? CO2 emissions. Due to its fame and beauty, the cave was frantically visited between 1948 and 1963, but no more. Lascaux II, opened in 1983, while Lascaux IV, opened in 2016, offer a reproduction of the original artworks. However, is the experience the same?

This is a major point of contention for me: is it worth it? Is it quite the same thing? Caves are not museums, not in the strict sense of the term at least. They became museums because they were (re)discovered. That being said, originally, their purpose was not informative, but utilitarian: living, sheltering, stocking, you name it. Therefore, visiting a cave is a unique experience; you’re visiting an ancient and timeless world — a slow-changing universe of stalactites and stalagmites — where people lived. It is a habitation that has not been used for an unfathomable amount of years and yet being there almost felt like I was trespassing. It’s a very personal, intriguing, sensation. For this reason, the atmosphere of the Lascaux reproductions differed far greatly for me to truly enjoy visiting them. They, truthfully, are museums: artificial, constructed and arranged. A cave is natural, wonderfully mysterious, almost dangerous… Lascaux II and IV offer us the chance to view the artworks, but minus the experience of being cut off from the world in an unknown, silent place.

Besides, when one thinks of ‘Prehistoric’, the first thing to pop up is usually dinosaurs, and, to a lesser extent, naked people in caverns crouching around like gremlins. Well, those naked people were: a) not naked and b) probably crouching, yes, but also c) the first artists. Can you imagine? The simplest geometric form, the simplest sketch of an animal, the littlest dots left on a rock by a human hand, thousands of thousands of years ago? Nothing realistic (in the modern sense of the term), nothing like the great antiquity models of proportion, or the bright and lovely brushstrokes of Impressionist paintings; and yet, art. Art at its most organic, its most human: simple, but powerful, intrinsic, mysterious and old. Very old.

There’s still (and probably will always be) debate about why and when proto-art appeared, but art historians generally agree around the date of 40,000 years ago, in the period called Upper Paleolithic. Some have argued that the oldest form of art is around 64,000 years old, which would then place it in the period of Neanderthal. And as to why… well, without scriptures, it’s difficult to know what homo sapiens thought, and as such what their motives were, if they had any.

Alright, but why write an article about it then? Because, ever since I was little, my parents took both, my brother and I, to see every cave they could possibly think of. My father is a cave art geek, and although he didn’t quite manage to get to my brother, he got to me. Visiting a cave is an awe inspiring experience: the atmosphere is so clear, yet so heavy, the absence of natural light forces you to thread with caution in this environment that humans have never truly tamed. And when the guide raises his lamp torch, and you can just start to make out the contours of a horse that was drawn millennia before you, you can’t help but feel very little, and very, very young. No other art form has ever managed to make me feel the weight of human existence so acutely. Especially in today’s world where virtual museums such as the one that recently opened in Paris seem to be the rage, cave art is often overlooked as too primitive, too demanding in its history and meanings, but also demanding in its locations. Indeed, you would need to travel to see art, literally. Surprising as it is, many people just do not see the point in doing so.

Ultimately, these artworks and other fossils are the only remains from a time of new wonders, of first and last steps, of evolution, of us. And this « us » that we cannot remember started to leave these testimonies half a million years ago, whether for the future or as acknowledgement of their present, who knows? Without them, we would never know where homo sapiens had settled, where they migrated, we would never know our origins. Cave artworks enable us to understand our very distant past, at least to an extent, and that is invaluable. Plus, don’t pretend that learning about the megafauna of the Pleistocene via paintings on cave walls isn’t terrific. Personally, if I ever wanted to know what it feels like to be chased by a dire wolf, I’d rather see it in painting.

I have said above that such artworks are not realistic, but that’s only true if you look at it with a modern, perhaps academic, perspective. To homo sapiens, these drawings were their reality. Whether by leaving their hand prints on the cave wall, in an almost symbolic gesture of reaching out to us, or by recording a hunting scene, they left us an impression of what being homo sapiens originally meant.

Alice Fournier, Class of 2020, is an Art History Major from Marseille, France

Featured Image: Depiction of aurochs, horses and deers on the walls of Lascaux, Dordogne, France. Image found on Wikipedia Commons.