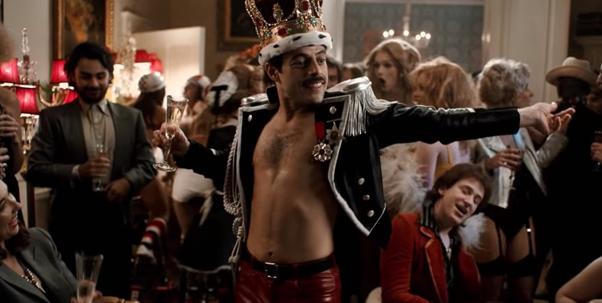 Bohemian Rhapsody, the new biopic about Queen from the perspective of Freddie Mercury, has been surrounded by controversy for years. In 2013, Sacha Baron Cohen, who was originally meant to play Freddie Mercury, quit the movie over creative differences with the remaining members of Queen. In 2014, director Dexter Fletcher dropped out. Later, director Bryan Singer was fired and replaced after refusing to show up to the set, which led to a temporary production shutdown. When the trailer for the movie was released, it caused outrage among fans of Queen, who feared that the movie was going to “straight-wash” Freddie Mercury, instead of accurately portraying his sexuality.

Now that the movie has finally been released, the controversy continues. Critics have rated it a meagre 63% on Rotten Tomatoes, whereas its audience score is as high as 92%. Pitchfork came out with a scathing review, saying the movie is “basically Queen’s Wikipedia entry as a biopic.” However, plenty of Queen fans seem to love the movie, and many other people loved the movie so much that because of it, they are listening to Queen’s music and becoming fans.

As a long-time hardcore Queen fan myself, I’ve had a hard time forming an opinion on this movie. I avoided most of the online discourse beforehand so that I could go into the movie with an open mind, and when I saw it in the cinema I was over the moon. The movie was exciting and fun; there were nods to some of my favorite Queen-related facts and anecdotes, such as Freddie Mercury’s outrageous collection of cats and the story of how radio DJ Kenny Everett made Bohemian Rhapsody a hit, and there was a fake David Bowie cameo. Most importantly, Rami Malek’s performance as Freddie Mercury was absolutely incredible. He may not look like him, but he got his inflection and his mannerisms down perfectly, and that was enough to sell the illusion (though his fake teeth, to be frank, were a ridiculous exaggeration).

However, when I got home, I started thinking about the things the movie got wrong. It wasn’t even the changes to the timeline that bothered me; it was the movie’s portrayal of Freddie Mercury. There is one scene that has a particularly vicious sting and which is also a big part of Pitchfork’s critique of the movie. It shows Freddie Mercury’s first meeting with his longtime lover Jim Hutton. It’s the end of a party thrown at Mercury’s home, at which Hutton worked passing out drinks and food; most of the guests have left, and the drunk rock star is sitting at his piano. As Hutton passes by, Mercury gropes him, which causes Hutton to be rightfully offended. As soon as Mercury apologizes, however, he is rewarded for his inappropriate behavior, as the two have an intimate conversation. This is not how Mercury and Hutton really met. They reportedly met at a gay club, and though their meeting involved some inappropriate jokes, there was no non-consensual groping of an employee by his employer.

The movie’s portrayal of their meeting is especially troubling considering the fact that director Bryan Singer has been accused of sexual assault on multiple occasions. It would seem that he projected his own tendencies onto Mercury, and I find it strange that band members Roger Taylor and Brian May, who worked on the movie, let this happen. There are more instances in which Freddie Mercury is cast in a negative light, and when this happens, it is often insinuated that his gay lifestyle is the reason for his selfish behavior.

It’s difficult for me to draw a conclusion about Bohemian Rhapsody. I’m happy that it’s bringing the music of this band I love so much to new people, I’m blown away by Rami Malek’s performance and I had a great time watching the movie for the first time. Yet, I can’t give it a positive review – not when it so grossly misrepresents important aspects of Freddie Mercury’s life and legacy, and occasionally borders on being a moralistic tale on the dangers of ‘the homosexual lifestyle’. Freddie Mercury was one of the best singers this world has ever seen, and his legacy has been a source of support for many LGBT people both throughout and after his life. He is a legend, and frankly, he deserves better than this.

Lang, B. (2018). Bryan Singer Strikes Out at Esquire Article on Sexual Assault Allegations. Retrieved from https://variety.com/2018/film/news/bryan-singer-esquire-sexual-abuse-1202980179/