How Lucky Are We: An Interview with Mr. Djenghis 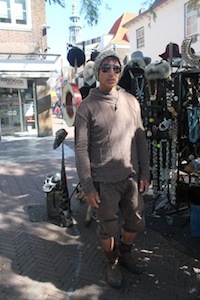 On the market square in Middelburg you can find a small stand with exotic goods. The name of the business is Djenghis, and the things that are sold are as exotic as its name, ranging from faux fur hats to all different kinds of bracelets and even penis sheaths. Mr. Djenghis told Tabula Rasa about his business, life and happiness.

Ger van der Burg, the owner of Djenghis, is of Moluccan origin and grew up in Rotterdam. He started selling his exotic goods 30 years ago at festivals in the Netherlands and other countries throughout Europe. Middelburg was one of the places where he was regularly selling his hats and other clothes, and when he wanted to settle somewhere with his children, he chose Middelburg. He now has three children (ages 30, 29, and one of 18 months).

Ger likes Middelburg and prefers it over Rotterdam, where drug addicts would sometimes just walk away with some of his merchandise. He makes a large portion of his ware himself, other articles are made by a girl from South America, and the rest he imports from Asia.

In the summer he sells his ware on the market every day except for Thursday, but he is not in Middelburg all year long. In November he will move to his apartment in Bruges and spend time sewing and making new hats and shawls of faux fur (he only sells hats of fake fur). He will also be at the Christmas market in Bruges. After that, he will travel to Asia on a work holiday, to find new things to sell and enjoy the nice climate and culture there.

Ger van der Burg is satisfied with his life. He lives a life of self-created happiness. He likes the fact that he runs his own business and created his own happiness in this way, but he also admits that he had luck. Luck, in that he wa

He said that it is important to realize what you have and to be satisfied with that. This might be good advice for UCR students who see themselves struggling with deadlines and other pressures of university life. We inherit so many privileges just because of where we were born. It is important to realize this and be happy that you are healthy and live where you live.

As Ger says: “I mean, you could also have been a ‘plofkip’ (a very fat chicken that is not able to walk or do anything, than turn into cheap chicken meat), just realize how lucky you are and what you have.”  Ger van der Burg will still be on the market square this month, so this is an ideal opportunity to drop by for a chat or to take a look at his exotic wares.

Douwe van den Berg, class of 2014, is a Philosophy and Religious Studies major from Ezinge, the Netherlands.