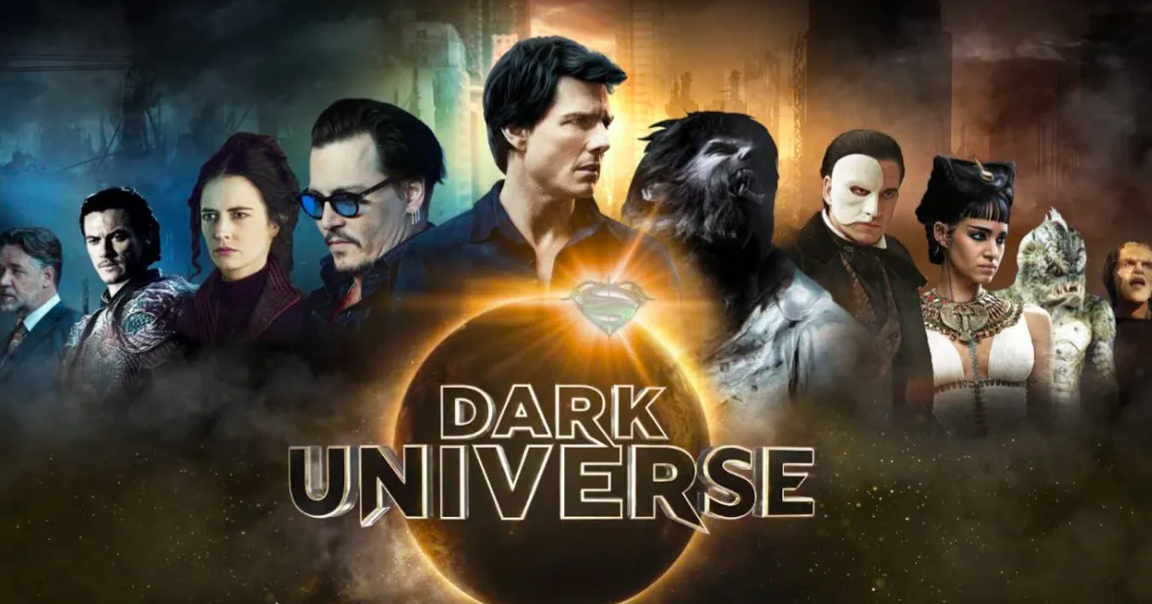 ‘Cinematic Universe’ is a concept we’re all painfully aware of, due to how often it has taken over our movie industry in the past decade. I’m not one to argue that the Marvel Cinematic Universe is the ‘scum of the Earth’ like Martin Scorsese and many movie fans do nowadays. However, the power this concept holds over film studios and movie theatres has become increasingly obvious. Although many franchises and movies have been turned into cinematic universes, such attempts haven’t always succeeded. And despite what some believe, this approach didn’t begin with Marvel.

One of the most infamous examples of failed cinematic universes is the ‘Dark Universe’ of Universal Studios. Now, if you’ve never heard of it, that makes sense as this Dark Universe crashed and burned in just one movie; and that movie is The Mummy (2017), starring Tom Cruise in the lead and Sofia Boutella as the titular mummy. It was a box office and critical flop, which might be confusing since it earned $450 million world-wide – until you learn that the combined production and marketing costs actually exceeded the box office earnings. Although production budgets are often officially declared, promotion and marketing costs are notoriously vague and ambiguous. For instance, Solo: A Star Wars Story, Green Lantern, John Carter are all movies that made $200 million+ in the box office but whose budgets were far too great to be deemed a success. The problem with the The Mummy is not only that it is poorly written, quite boring, and not visually exciting; it was also incredibly obnoxious in its attempt to kickstart a cinematic universe.

Many movies have been argued to be set in the same universe as other (most famously, fan theories about Pixar & Disney movies, as well as appearances of E.T. in the Star Wars prequels). However, a cinematic universe is more than just implied or clandestine references/crossovers. Usually, a cinematic universe stars major iconic characters, or characters from different movies, pitted against each other or alongside each other. For instance, Fast & Furious changed from a franchise into a cinematic universe by creating the spinoff, Hobbes and Shaw. The Conjuring is unfortunately also a cinematic universe because of the exhausting number of spinoffs it has led to and the crossovers between them. Despite the fact that The Mummy was not preceded by individual movies, it set up several iconic and established characters in one film, planning and teasing future movies for them.

Universal Studios is one of the oldest studios in the Hollywood business, and a successful one – at least until the 21st century came around. Famously, they created one of the first cinematic universes between the ‘30s and ‘50s when it was still a novel invention – whereas now it’s so common it is almost trashy. The ‘Universal Monsters’ were a collection of movies starring famous monsters, most prominently: Dracula, the Wolfman, Mummy, Frankenstein, the Invisible Man, and the Creature from the Black Lagoon. These monsters had their own films but also featured in films together; sometimes actors would even switch roles. Eventually, they ran out of ideas and titles became marketing-ploys only; one of the last films in this phase was Abbott and Costello meet The Mummy, not exactly prime material. Still, it was an experiment that took movie studios decades to follow up and perfect into a profitable format. In the early 2000s, we had our first modern horror crossovers, implying a cinematic universe, with Jason v Freddy and Aliens v Predators. Then came Marvel and DC, and we all know the rest.

Before Universal Studios’ ‘Dark Universe’ began, there was prototype cinematic universe that emerged thanks to the smash hit of 1999’s The Mummy, a classic blockbuster still talked about today. The Mummy (1999) spanned an immediate sequel, The Mummy Returns (2001), as well as a spin-off movie, Scorpion King (2002) starring Dwayne ‘the Rock’ Johnson. To be fair, this experiment was short-lived, since Universal never managed to recapture the success of The Mummy (1999), and its sequel and three-quel mostly failed. Nowadays The Mummy (1999) lies buried amongst other zeitgeist classics which studios were never able to turn into a marketable franchise – but at least it gave the world Brendan Fraser.

Come the 2010s and the immense success of Marvel Studios’ cinematic universe – that even DC was trying to rip-off – and Universal decides to give the idea another go. Even though they practically invented cinematic universes for Hollywood, this was decidedly just a very lazy attempt to copy the Marvel formula. However, instead of taking their time – like their predecessors and Marvel studios did – by building up the universe from independent movies to crossovers, they wanted to have their cake and eat it too.

Alex Kurtzman, the person assigned to remake The Mummy for modern audiences and for mass box office appeal, has been a common choice for reinventing franchises. He co-wrote Mission Impossible III with JJ Abrams, as well as the first two Star Trek reboot films; the latter often panned by Trek fans, but which still had box office appeal and landed well with general audiences. Kurtzman’s also been a co-writer of many 2010s blockbusters: Legend of Zorro, Transformers, Cowboys & Aliens, and The Amazing Spider-Man 2. He also wrote the near-universally panned Star Trek: Picard and Star Trek: Discovery, which pretty much killed that franchise for a while. Point is, he is not a particularly good writer; he’s more of a studio stand-in. Universal Studios pretty much hands him whatever property they have rights to, and he’s instructed to write a bare-bones marketable script. Most notable examples are Amazing Spider-Man 2 and The Mummy, both heavily criticised for their attempts to jumpstart and tease a cinematic universe, further weakening their already uneven story. Apparently, some have claimed that The Mummy’s failure is due to Tom Cruise’s heavy involvement. However, Tom Cruise has been a producer on the Jack Reacher & Mission Impossible franchise, as well as Vanilla Sky, and they turned out mostly fine. Given that he also produced Top Gun: Maverick, I personally think that Alex Kurtzman’s writing more at fault here in the movie’s poor quality. It’s far easier to pinpoint Kurtzman’s contributions and his poor screenwriting record. And it would make sense too that this was his mess; despite his shortcomings, all those poorly written movies still did very well in the box office, so Universal keeps handing him bigger projects.

There was a lot of talk about cancelled films in the Dark Universe. Universal released a promotional image – reflecting the immense and arrogant self-confidence in its new project – showing all the future stars of their proposed new cinematic universe. It shows Tom Cruise and Sofia Boutella alongside Javier Bardem, Russel Crowe, and Johnny Depp. Apparently, Angelina Jolie would also be star in a new The Bride of Frankenstein and Dwayne Johnson would be the future Wolfman.

What actually became of the Dark Universe?

Since The Mummy (2017), we have gotten one other Universal Monster film: The Invisible Man (2020), starring Elizabeth Moss. The original movie was set around a crazed scientist turned invisible who goes on psychopathic rampage. The reboot focuses on Cecilia, a victim of an abusive, narcissistic, controlling, rich scientist/corporate boyfriend, whose prison-like mansion she escapes in the middle of the night. The day after, she discovers he committed suicide and left her his estate. She suspects he is still alive, haunting her in some invisible form, despite her friends and family’s scepticism.

The Invisible Man (2020) is a world apart from The Mummy. It is artistic rather than blockbuster, it is serious, nuanced and explores topics like sexual abuse, trauma and victim-gaslighting. It has a more subtle use of CGI for its ‘monster’, fantastic cinematography and acting, as well as a clear narrative. Most importantly, it’s on a limited scale and therefore devotes all its attention to its own narrative rather than setting up future sequels or big stars. It has a message and it has themes it wants to get across, as well as complex characters with motivations. The movie pretty much succeeded in all artistic aspects where The Mummy failed. And ironically, despite the movie’s more subtle, subdued approach, it made $140 million, on a $7 million budget.

For the time being, there is no sign of continuation of the Dark Universe. There likely will be Classical Monster reboots done here and there, with mixed results depending on the artistic freedom given to their directors. Personally, I found The Mummy to be more mediocre than particularly bad; in fact, some of the bigger franchise films under Disney have been far worse. And, despite The Mummy’s failures, it didn’t hurt any major careers: Tom Cruise and Russel Crowe appear per usual unscathed, and Sofia Boutella continues climbing the ranks in her accomplished career. It also seems likely that cinematic universes are on a downward trend; with Warner Bros (& DC’s) bankruptcy and Marvel’s ailing Phase 4 spells a hopeful end to Superhero cinematic universe domination. Meanwhile, with his recent films, Tom Cruise seems to come out on top, yet again.