An Opportunity to Grow: An Interview with Mayor Bergmann 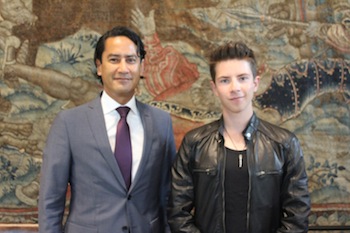 In 2012 Harald Bergmann became mayor of Middelburg, and true to tradition he honored our college this year by giving a speech at the beginning of IntRoweek. I had the chance to ask him some questions before the event.

One of the first things I asked him about was what he liked most about our college. Mayor Bergmann replied he believed “the students bring vibrant energy […] to our town”, and furthermore cited economic reasons for the good impact of the college on the city, saying that “they spend their money in Middelburg, so we are very happy and they are very welcome here.”

The presence of roughly 600 young and energetic students of UCR has benefitted the economic activity in Middelburg, as young people tend to go shopping or out in the evening.

However, it is also important that this community of students is not isolated from its environment.

Concerning this, Mayor Bergmann thought that we students are actually already involved quite a bit, and that our greatest achievement here in society in Middelburg would be “if [we] are just like the other inhabitants of Middelburg” and should “show we are here”, jokingly adding that we should “stick to the rules!”

Seeing as quite a few of our students are interested in and studying politics, I wanted to know what had caught the mayor’s interest in the field and how he came to the position that he is in now.

Mayor Bergmann said he was “always interested in politics” during his time as a civil servant in Rotterdam, and that he wanted to get more involved and therefore joined the Liberal Party (VVD). He was then asked to be secretary for the board for Rotterdam Center, and in 2002 he was chosen to be prime candidate for the elections of the sub-municipality of Rotterdam Center, himself saying “from there my political career spread in many interesting ways”.

Harald Bergmann has since gone on to become Mayor of Albrandswaard before becoming mayor of Middelburg, and is currently involved in several committees.

On the topic of careers, I asked the mayor what was his advice for us students in these changing times. In the late 20th and early 21st century, we have already seen quite a big shift in the job market with regard to how far a simple college-degree will get you; more and more companies are looking for people who have gone beyond, travelled and worked abroad, for example.

On this issue, the mayor answered that he hoped that UCR students “gain their knowledge not only here at the UC, but will go all over the world to find knowledge and to learn it, and also to do something with it for humanity.” With that he placed an emphasis on looking beyond the classroom and college.

The Mayor went to University himself in Leiden, I asked him what experiences he would share with us. “Well, it was not the most exciting experience […] but what I found most interesting was that you see a lot of other people around than you are used to seeing, and you mature, because you get to the age of 17, 18 and you enter a new life.”

UCR isn’t as big as Leiden University, but as an international university, we also see a great many of people from all over the world, and this undoubtedly enhances our experience here. So, to the First Years, as Mayor Bergmann did himself, may you all find your time here to be an exciting experience and an opportunity to grow and mature as students and as people.

Peter Williamson, class of 2015, is a Politics and Sociology major from Hamburg, Germany.

One thought on “An Opportunity to Grow: An Interview with Mayor Bergmann”