Monday evening, 22 students met in C20 to discuss the strategic plan with Managing Director Jorrit Sneijder, and our Dean Bert van den Brink. As we students were only let in on the final product, and cannot claim much insight into the internal deliberations that preceded it, many of the questions raised came from a place of struggling to understand the basic intentions behind the content of the document. While the answers we got were more or less satisfactory, we are nonetheless left doubtful as to how much of our input will actually be reflected in the final product. Below follows an outline of the main points covered, and their respective administrative replies.

The meeting started off with the tuition fee raise, as this was considered to be the students’ main point of concern. In reaction to Tabula Rasa’s previously published critical article, both the Dean and Managing Director took on several points of criticism. The general aim was to help us as students better understand where exactly our money is to go.

The first point of confusion addressed was the financing of the potential 5th department. This new department will be established in cooperation with the Province of Zeeland, the Ministry of Education, and the city of Middelburg. The money contributed by these parties will also be used to finance housing and facilities for the 100 additional students that UCR hopes to attract with this new program. It was made clear that none of the increased tuition fee will be spent on this.

The extra tuition fee will instead be used to improve the facilities and housing situation as they are today. There are five areas where this money will be applied, as raised in last year’s Public Spheres: 1) smaller classes, 2) housing situation, 3) ICT facilities, 4) study spaces and 5) curriculum improvement. To pay for these improvements, 66% will come from the raised tuition fee, and the other 34% will be paid for by external sponsorship. The aim is that students who are currently in their 3rd year will still benefit from the improvements.

The financial situation of UCR was next addressed. One mentioned was the insecurity regarding the funds available from the Dutch government to improve higher education. With the installment of the social-loan system, it was promised that the money saved by the government through no longer providing generous student stipends would instead directly go to universities. From 2018 onwards, universities were to receive more funds to invest in the quality of teaching. With the negotiations for a new government, the social loan system might be abolished, leaving it highly uncertain whether these funds will be made available.

Since its establishment, UCR has built up a large debt, due to the fact that governmental support for graduating students only started to become available following the first graduating class. The debt accumulated in these first two years is in large part responsible for the very low solvency rate included in the strategic plan. In order for UCR to be stable, a solvency rate of 30% is required. Solvency refers to the ability of a corporation to meet its long-term fixed expenses and to accomplish long-term growth. Currently, we are on 11%, this is quite critical, but the aim is to reach 30% by 2021, which is an ambitious aim. How exactly this tripling will be achieved was not specified, only that the tuition fee raise will not be used towards this end. When a student asked whether we would receive the money from the fee back if it would turn out that the Dutch government keeps its promise and will give money to the universities, management wasn’t able to give a yes or no answer. They closed the topic with stating that in such a case, they would discuss it. From the students attending, a stern demand for more transparency regarding financial plans was uttered.

The strategic plan did not feel very realistic, as it did not provide enough solutions for the problems it identified. Furthermore, the plan does not establish whose responsibility it is to ensure that these ideas are seen through. When these questions were raised, management and the Dean responded that they ‘needed closure’ on this plan in order to move on.

The many issues surrounding student housing are often lamented, and have not gone unnoticed by the administration. UCR plans to take a stronger stance on housing, working to level with Villex and Woongoed to improve living conditions (especially in regards to Bagijnhof). However, who is to be responsible for these developments was not made entirely clear – the administration seemed to put a greater burden on the HAC than was reasonable to expect from our student representatives. Again, this topic was pressed by students as being one of great importance to the students right now. If UCR would manage to show significant results in this area, it would contribute to the general trust and goodwill of students towards other plans that management wants to implement. Furthermore, it was promised that housing improvements would start with immediate action, and that all students would have the benefits, even the ones in their last year. Well, we can’t wait to see what will happen in the coming months.

The administration made clear that considerations for expanding the UCR campus locations are underway, in seeming defiance of the fact that Middelburg only has so many suitable spaces for student housing. This is the point where things seemed to get tricky – promises for campus wide WiFi and precautions taken to make our housing sustainable seemed indulgent additions to an agenda that includes pressing issues like mold in the Bagijnhof bathrooms. However, it was made clear that these ambitious developments do carry a certain level of larger importance, as they are helping work towards the goal of making UCR a more competitive university college in spite of its relatively isolated location. 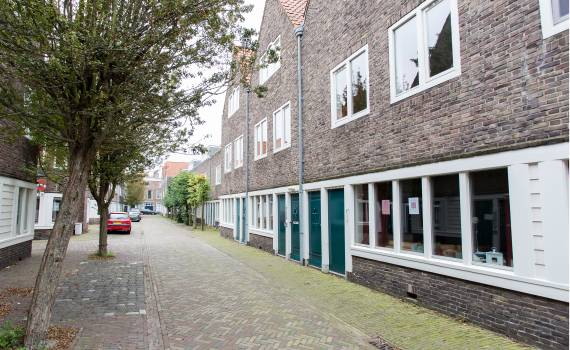 The improvements that will be made in order to improve the campus culture overlap largely with the feedback received at the first Public Sphere event. First of all, class sizes will be reduced to 26 students. More silent study places will be created, making place for 60 additional students to study comfortably. For this, locations in Middelburg will be leased. ICT facilities will be improved, and WiFi spots installed in all university buildings.

Next to good Internet connection, the strategic plan proposes to introduce consistency when it comes to the use of digital tools in class. Moodle will replace workspaces as the digital medium for communication between students and professors.

Additionally, BYOD (Bring Your Own Device) will be implemented, a plan that seems unfinished even with the explanatory comments. A concrete approach to BYOD is to be developed by the Curriculum Committee (installed to critically analyze problems in the learning environment through a collaboration of faculty, students and the management). The expertise of Utrecht University with regards to using digital devices in the learning environment will be used to ensure that the plan is successful. The question was raised whether the good service from UU, providing us for instance with a better working mail server, should not be used more often. The Dean replied that it is not in all cases a good idea to depend on a system that is hosted off-location.

Students were left wondering whether consistency is desirable if it might inhibit professors from implementing their own personal teaching styles. Should the quality of teaching not be higher regarded than the medium through which it is achieved?  The comment that the current classrooms computers do more harm than good to the quality of learning was refuted, with the management saying that most old devices have been replaced “just last week”.

The issue of UCR’s numerous and often difficult to coordinate academic requirements was a hot topic. The language requirement bore a particular brunt, with the administration reassuring us that the Curriculum Committee plans to reassess this, given that language requirements are not present in most universities in the Netherlands. The controversial edits already made to the Capstone program were again brought up, with the Dean reinforcing that the decision to increase the gravity of the Bachelor Thesis is in the student’s best advantage – the additional workload would be balanced out by more time to complete this critical piece of student research.

Currently, the administration plans to present its decisions in December, with an implementation period through to the end of the semester. The administration noted that this point is of greater concern to the UCR staff, especially in the Academic Core, given that in their case, jobs may be on the line. However, encouragingly enough, there are no plans to cut UCR’s research budget.

In terms of professorship, the Dean made clear that a BKO certification (a national University Teaching Qualification) is to continue as a staff-wide requirement. The Dean also brought up additional responsibilities to be handed off to the Curriculum Committee (a collective student and faculty collaboration) to keep an eye on our current marking system, and to the way in which first years can best be introduced to the concept of Liberal Arts and Sciences (through fewer requirements, perhaps?).

It is important for us students to acknowledge the efforts made by the management towards transparency. However, while the discussion was both respectful and informative, it was not as enlightening as one would have hoped. Still missing is a critical sense of agency – it was great to get the chance to understand the motives behind these different administrative decisions, but why was this opportunity only offered after the fact? In this regard, UCR still has a long way to go when it comes to putting into practice the democratic values it frequently preaches.

The UCR Council vote has as of now been postponed, with details of the rescheduling yet to be announced.

Anna Den Hollander, Class of 2018, is an Antiquities major from Barendrecht, the Netherlands.

Noga Amiri, Class of 2018, is a Literature and Art History major from Hilversum, the Netherlands.

Gerjanne Hoek, Class of 2018, is a History, Politics and Linguistics major from Bunschoten-Spakenburg, the Netherlands.

One thought on “The UCR Strategic Plan Discussion Evening – a Summary”

Do you have any questions about Tabula RASA? Please feel free to send us an email: [email protected]