When Painters Flip: Art, but Make It Weird 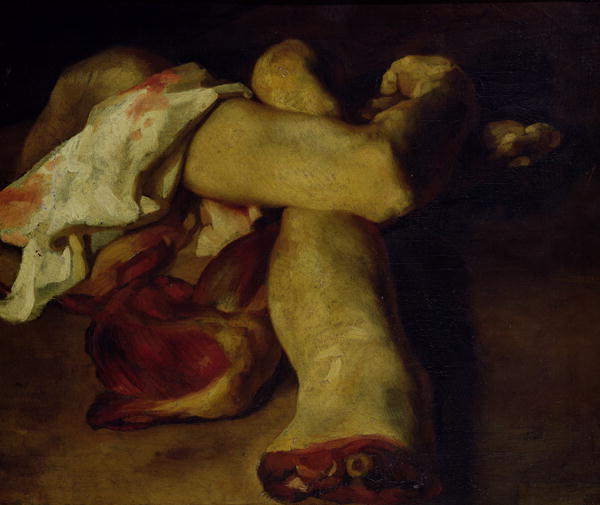 It’s that time of year again, when everything-pumpkin is on the menu. Pumpkin soup (yuck), pumpkin candies (moderately passable), pumpkin seeds… and of course pumpkin carving (definitely passable)! Halloween season means that I inevitably double-check with myself and map out the things that scare me – reasonable and unreasonable. In fact, since it’s apparently horror season, my brain decides that it’s also a great time to throw very interesting nightmares at me. Yes, you guessed it, I can’t even escape art history in my dreams; which is very fitting since my Modern Art course and my Senior Project seem to have a bet going on as to which one can drive me crazy the fastest. Just last night, I had one particularly artsy dream, filled with lanky spider-like figures, much like those of Louise Bourgeois, and cyclops figures. Creepy.

Speaking of creepy, throughout the course of our (Western) art history, there’s been a few painters whose sanity I have often questioned. The uncontested winner, of course, is Hieronymus Bosch, but I will also introduce you to strange works by Odilon Redon, Francis Bacon, and older artists such as Théodore Géricault, or Francisco Goya (another very probable winner). Let me throw a little disclaimer in there, just in case: some of these works are particularly graphic, so if you do not like the sight of severed limbs (who doesn’t, right?)and other highly unfriendly details, I suggest you leave now. Now that’s done, here’s my severely reduced list of just-as-severely deranged artworks. (Because there’s a lot more weird stuff out there -believe me.) 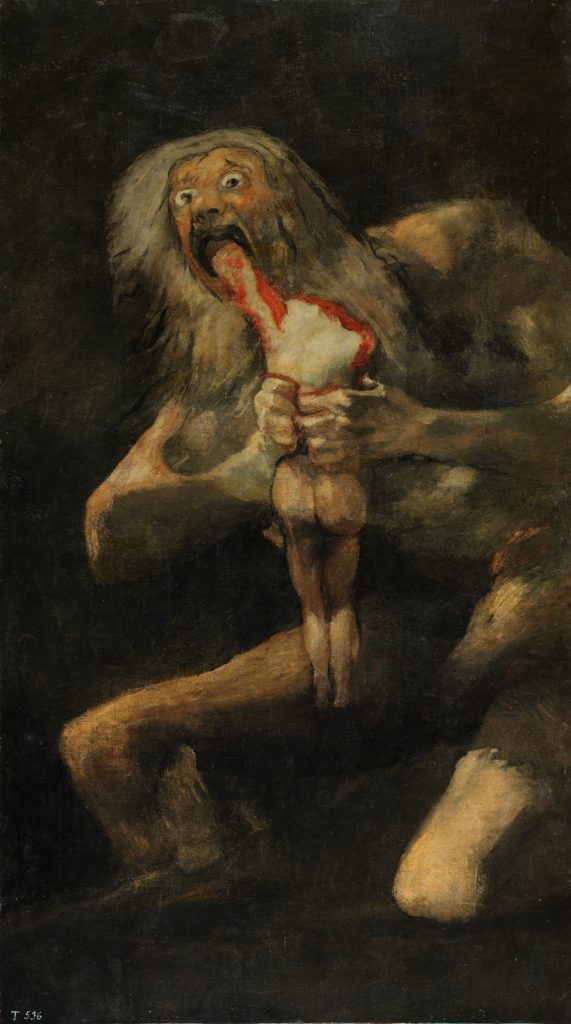 You’ll be happy to know, there’s merch available with that specific painting, just in case you feel like adding a little extra macabre to your wardrobe. Just Google it, I swear you’ll find it.

Goya’s depiction of the Saturnian myth forms part of his “Black Paintings”, a series of mural paintings that decorated his house, la Quinta del Sordo. Yes, this was originally a mural, which makes it even more disturbing.

To be honest, before seeing this painting by Géricault (1791-1824), I truly thought that Goya’s painting was the most gruesome thing I’d seen, but I very quickly revised my judgement. The funny thing is, Géricault is traditionally associated both the Romanticism and Realism, two diametrically opposed artistic movements of the 19th century. He was fascinated with macabre subjects, his other painting muse being, strangely, horses. His most well-known work is without a doubt Le Radeau de la Méduse, painted in 1818-1819, which underlines his interest in what came to be called “fait divers”, without completely shedding a more Neoclassicist approach to human bodies: although most of them are corpses, they’re still very much athletes with huge muscles and chiseled abs. If you study the oeuvre of Géricault, you will encounter less graphic pictures, though they are still disturbing. It’s a trend, my friends. (See for example: Monomane, 1819-21)

Let’s look into the “aesthetically pleasing but disturbing” category. 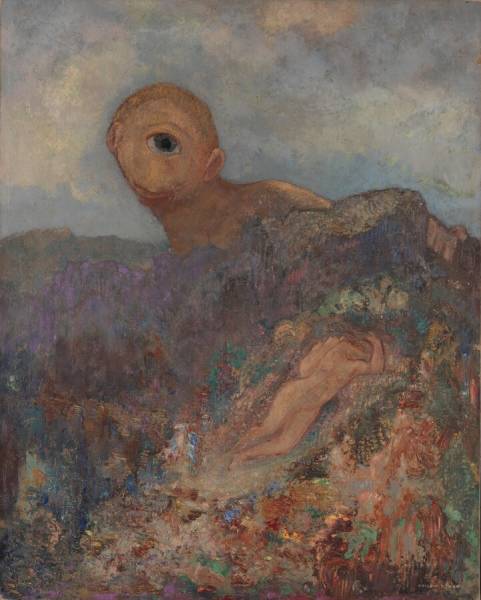 Am I the only thinking that this cyclops looks more innocent than some people I know? He is almost adorable, with his one big blue eye looking straight back at you, and what appears to be a small smile. Well, this scene depicts a story of unrequited love: the cyclops Polyphemus is spying on the Nereid Galathea, who really cannot be bothered. In that context, Polyphemus’ big eye seems immediately more dubious: a lustful, predatory look over what appears to be a protected alcove within the mountain. Cute, right? And yet, even then, Polyphemus does not appear directly threatening, but his eye very much is. In fact, eyes are a recurring feature of Redon’s work (see for example: The Eye like a Strange Balloon Mounts toward Infinity, 1882).

Odilon Redon (1840-1916) depicted what has been called a “dream world, inhabited by fairies, monsters, spirits and other fantasy figures” (Kröller Müller Museum, “Odile Redon”) which places him as a representative of symbolism, another 19th century art movement. He believed in the “superiority of the imagination over observation of nature” and shared with the symbolists, both writers and painters, an interest in the “fantastic, mystical, and sublime forces found beneath the surface of everyday life”. (MoMA, “Odile Redon”.) 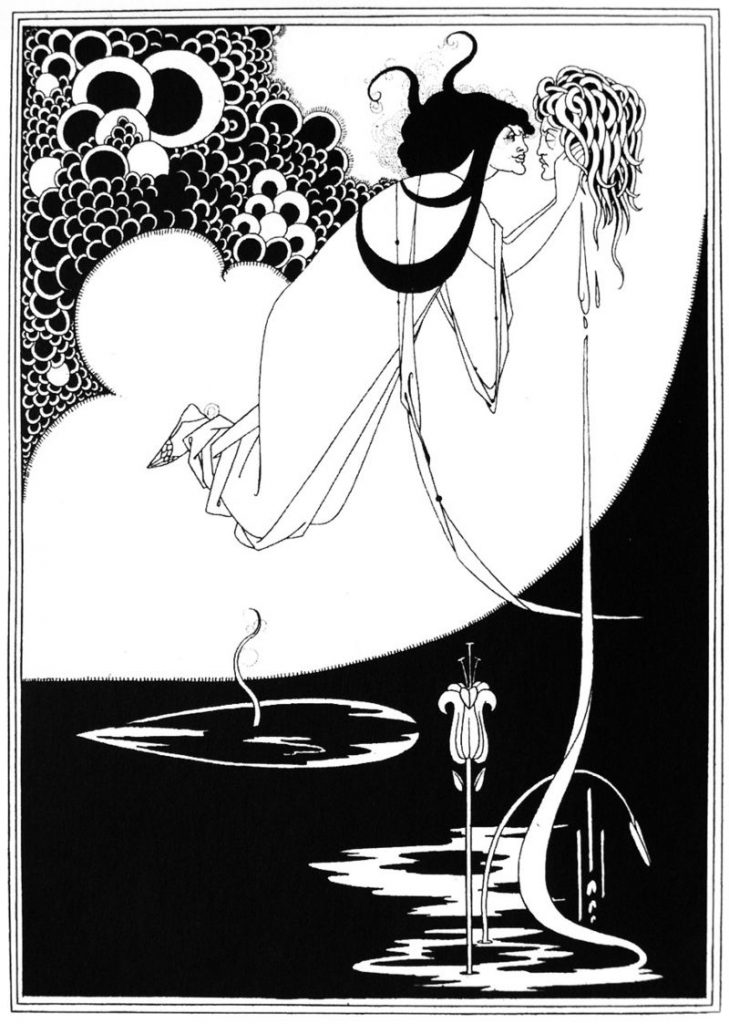 Aubrey Beardsley (1872-1898) illustrated Oscar Wilde’s play Salomé (first published in February 1893), producing sixteen prints depicting the story. In case you didn’t know: Salomé, according to the New Testament, received the head of John the Baptist after dancing for King Herod. The piece you can see here, originally named J’Ai baisé Ta Bouche Iokanaan, was reworked and renamed The Climax. Some argue that Beardsley’s prints were a critic on his Victorian fin-de-siècle mentality, but if I start to dive into scholarly debates, we’ll still be here next week, so let us go back to the rest of our morbid pictures.

Of course, I could not leave the old master of weirdness out of such an article. Hieronymus Bosch (1450-1516) was a 15th century Dutch painter, and was part of what came to be called the Northern Renaissance. Check out the sources at the end of this article, where there is a link to an interactive website explaining the painting much better than I could, in a very interesting way. You’ll be able to see details much clearer there, which is why I decided not to include a picture of it directly in the article or elaborate too much.

Francis Bacon, Triptych Inspired by the Oresteia of Aeschylus, 1981

I’d argue that while Bosch was the ‘old’ master of weirdness, Bacon (1909-1992) was definitely the new one. For this specific triptych, Bacon stated: “I could not paint Agamemnon, Clytemnestra or Cassandra, as that would have been merely another kind of historical painting… There I tried to create an image of the effect it produced inside me” (qtd. in Volume IV of Catalogue Raisonné, 2016). Its true subject was in fact the tragic aspect of the Greek dramatist Aeschylus’ play. Probably why it’s so grim and strange to look at. For copyright reasons, I was unable to insert a picture directly in the article, but here is a link to view it in all its gory glory: https://www.francis-bacon.com/artworks/paintings/triptych-inspired-oresteia-aeschylus.

Alice Fournier, Class of 2020, is a History and Art History major from Aix-en-Provence, France.

“The Art of Aubrey Beardsley”, by Eric Smith: http://people.loyno.edu/~history/journal/1992-3/smith-e.htm

Francisco de Goya y Lucientes, Saturn: downloaded from the museum’s website with permission for private use