Emily is Away: Choice and Acceptance in Indie Games 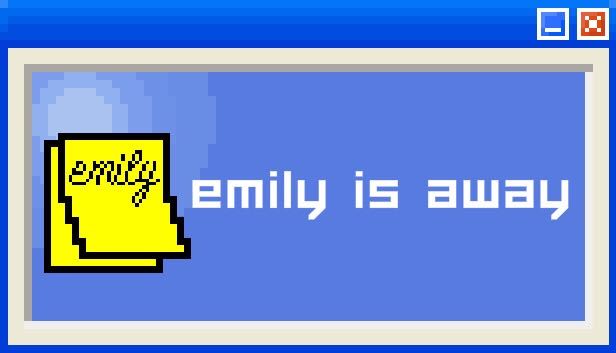 Do our choices really matter? Is the world really a blank canvas on which you can paint your fate? If you could rewrite your past by making different decisions, would that positively influence your present? I’m pretty sure anyone reading those lines has already asked themselves those questions, and many similar ones on their saddest days.

Emily is Away is a free video game made by Kyle Seeley, released in 2015. It is a visual novel, understand: a game that is mostly text-based, where you spend the entirety of the gameplay having a conversation, and occasionally making key choices that will influence the rest of your adventure. The interface is a direct reference to the old messaging apps such as MSN, which was very popular in the early 2000s before Facebook was a thing, and the gameplay consists of hitting random letters on your actual keyboard, while the real text unfolds on your screen, as if you were really chatting. You play as an unnamed male character (you get to pick his nickname at the beginning of the game), and most of the game is comprised of a chat with Emily, your high school friends/crush/?, and some minor chats with background characters.

What Emily is Away can give you is not a definite answer to these philosophical ponderings, but rather an invitation to look at things from a new perspective. This article will spoil key elements of this very short (around an hour max) free video game, hence, I would invite all of you to try it before continuing, though it is also completely fine to just read this article out of curiosity (you can find the game on steam here https://store.steampowered.com/app/417860/Emily_is_Away/)

The game unfolds in 5 acts, representing one year each. At the end of every year, you have key decisions to make that will influence your relationship with Emily. If you decide not to go to the big party at the end of your first year of high school, she will start dating Brad (a stereotypical Chad/jock-type). In the following years, she will need to be consoled after breaking up with him, and you will have to choose to cancel your plans with Emma, another close friend of yours from your uni, to see her. As years pass, you and Emily grow apart, making your conversations more sparse and impersonal, and ultimately you wonder where you went wrong, and why you could never properly convey your feelings to her. And this is where this game really shows its purpose: whatever choices you make, whether you go to the party or not, invite Emily over or stick to Emma, confess your feelings to her or not, this game does not allow for happy endings. Whatever the player does, they end up having a sentiment of unfairness and even sometimes resentment towards Emily: the character has obvious feelings for her, but never manages to express them well.

If you chose to invite Emily over to console her, you will understand a year later that you ended up making out, but that she was not consenting to that, and felt abused by the character. The treatment of consent in a video game can be extremely sensitive, but the very impersonal way it is showcased (subtly mentioned through a conversation a year later), appears to make it less shocking. It does however leave you with a profound taste of disgust. Near the very end of the game, you get hit by the realisation that there is only one narrative in the story- and that you were implied in that experience too.

What do we actually know about the story, and the characters? All we had was a very impersonal chat box with Emily. What if our character loved the idea of loving her, more than Emily herself, and simply enjoyed being in this state of impersonal love? What if Brad wasn’t a horrible jerk, but a lovely person who genuinely cared about Emily and treated her way better than our main character could have?

I personally see it as a game of acceptance. Accepting that our choices don’t always matter, that they never involve only one actor, or one point of view. It’s necessary to understand the bigger picture. This can consist of accepting and understanding how others feel, but also accepting defeat and mistakes. It is important to admit that humans are flawed beings, and, most importantly, to accept that trying hard is not always synonymous with success. There is some sort of nihilistic hope (if that is even a thing) in Emily is Away’s moral: you can’t always achieve your goals, and ruminating on the past thinking “damn it, I should have behaved differently” is not only unproductive, but useless. Moving on and forgetting about your Emily is, sometimes, the wise thing to do.

Is Emily is Away a great game? It is hard to say. Though it has generally been praised by critics (its steam reviews are “very positive”), it has also faced critiques for its treatment of the narrative. All characters are empty shells with little backstory, and the end goal of “obtaining” a woman can be considered as rather objectifying. Personally, I like to see it as a game conveying a message, and if you see Emily as representing our goals in life rather than an actual person in itself, it might make more sense. It is definitely a short and impactful experience, that I would highly recommend to anyone interested in procrastinating for an hour.

Luc Aboubadra, Class of 2020, is an Interdepartmental Major studying Politics, Religions and History, from Paris, France.