Still on Fire; The Battle for Attention in the News Between the Corona and Climate Crises. 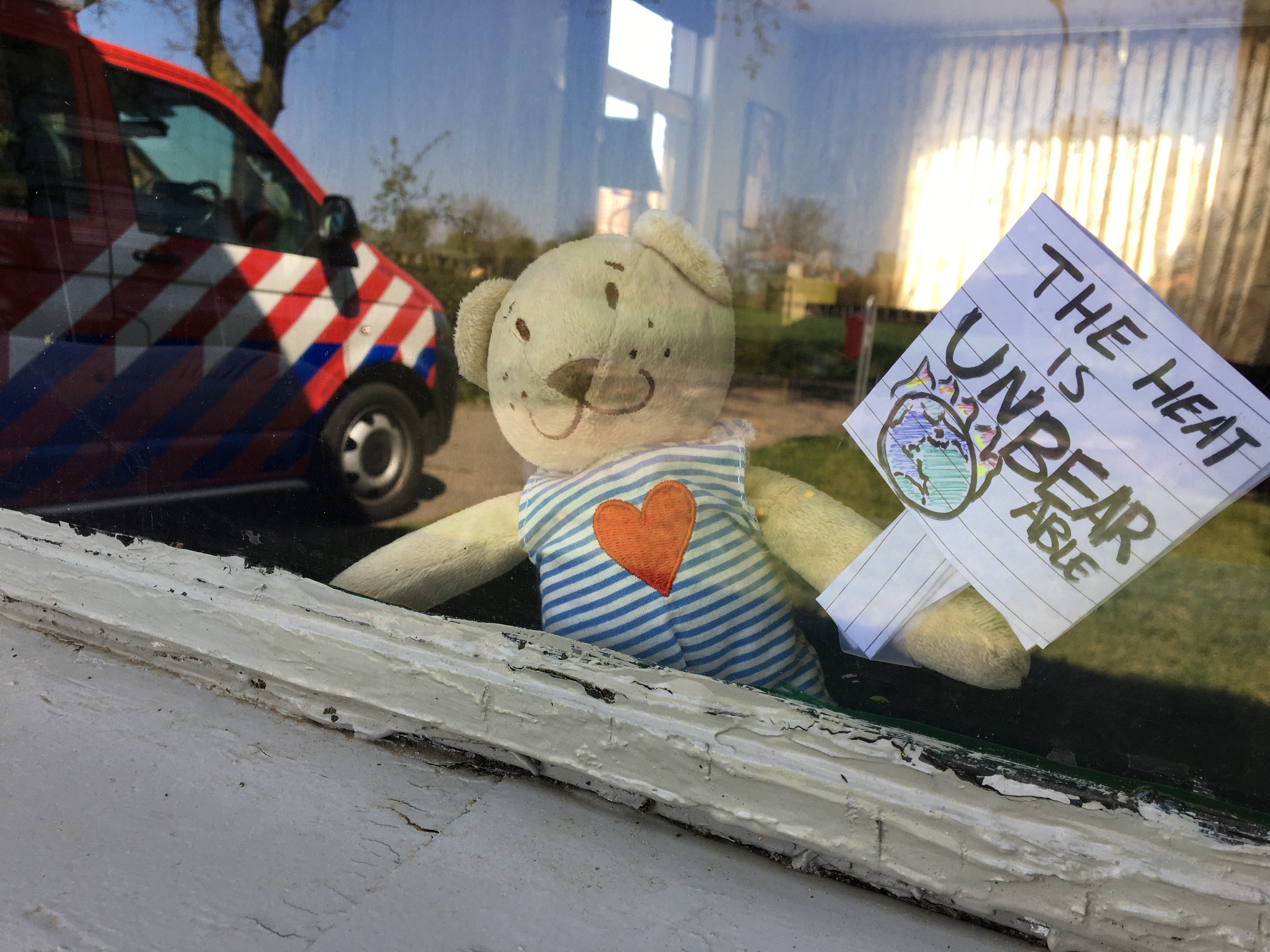 “Our planet is on fire.” Just a few months ago, the notion that climate change was a force to be reckoned with firmly bore its spot in the news. Now those colorful protest signs, latest recycling methods, and vivid images of the Australian bushfires have given up their prominence in the news for a new competitor: COVID-19.

As climate activism’s attention in the news diminishes, environmentalists worry that our new crisis will damage attention to the existing one. Thankfully for them, there are still some ways to fight climate change, and boost attention to it, from the safety of quarantine.

“Raising awareness is always good,” says Toon Holman, secretary of GroenLinks’s youth division DWARS in Gelderland. Holman’s guiding principle, he says, is that life is unfair, and that we should all work to do something about that. He wants to see happiness maximized, globally. “And that’s kind of hard if there isn’t a planet to live on,” he smirks. Holman finds it a natural and even a good thing that the virus is taking up so much news space right now. “I think it makes a lot of sense. This is the biggest global crisis we’ve seen apart from climate change, and as opposed to climate change it is an immediate crisis that’s happening right now.”

Jayden Trask agrees. Trask is a revolutionary socialist currently studying International Relations, Asian Studies and Japanese in Melbourne, Australia. He believes that the way to save our planet is by fundamentally restructuring the global economy. “I don’t think that we can make everlasting change until we change the way that our world is economically.” Right now, he explains, with all these terrible carbon energy sources, it’s just more profitable to destroy the earth than to save it.

And even if the COVID-19 outbreak is currently the more pressing issue, Holman and Trask mention, it is important to stress the enormity of the climate crisis as well. As countless studies, articles and events have shown, our planet has been heating up – is on fire, even. It is likely that over a billion animals burned to death only a few months ago, and the fires are only one consequence of climate change to have unfolded so far. As Trask puts it: “If we keep destroying the earth, we can hardly expect it to do anything but die.”

That said, even in a quarantined environment, there are possibilities to further climate action. Holman suggests environmentalists, in this activist downtime, talk to people that are on the fringe of their political bubble and gently nudge them into it. “And to spread awareness, you know, signing a petition never hurts.” Especially now that the media spends so much time on the coronavirus, Holman points out, we should take the time to discuss other topics that are important to us with those around us.

Trask, in the past, has done just that. He beams as he tells the story of how he brought his conservative grandmother along to a protest for the first time. “She thinks that climate activists are misled and being lied to, and they’re all in it for money or something,” he says. “But I decided to take her to this anyway so she could see what people actually do.” Trask explains how the police were everywhere, and how rough they were being with the protesters. “And my grandma could see that these people blockading the bridge, all they wanted to do was protect their future.  There were old people there, there were kids, there were families… There wasn’t just a bunch of rambunctious punks – it was a community of people, and it was nice that she could see that.” That, Trask says, was a good teaching moment, and probably the best way to make people understand.

In addition to spreading awareness, Holman mentions local initiatives you can keep an eye on to make a difference while COVID-19 rages across the globe. The University College Roosevelt (UCR) Green Office in Middelburg is an example of such a local initiative. Jessica Tax, the UCR Green Office Communications and Marketing Manager and a student majoring in environmental science, elaborates on the sustainability week the Green Office recently hosted.

The Green Office, Tax said, set up two challenges. The first is the minimalism challenge: “On day one you throw away one item. Day two, two items. Day three, three items. And so you kind of go through your own closet, own room, own house, and see what things you don’t really need anymore. But then the idea is that you don’t throw it away, but you donate it or reuse it for something else.”

For the second challenge, students were encouraged to go for a jog and pick up some waste in the process, keeping their bodies fit and their environment clean. “But you can do the same thing on a simple walk, of course,” Tax adds. What makes these challenges so great is that they can be done anytime, by anyone interested, and that they are useful both environmentally and personally.

Our socialist warrior Trask, when asked what climate action we can take in quarantine, says while going out and rallying is out of the question, people instead should read. “Read political texts; read history books; read whatever left-wing political thing got you into climate activism. You know, go back and read some Marx, or go back and read some books on eco-socialism or whatever catches your fancy.”

Tax believes that doing research into better methods of recycling or into non-waste products to integrate into your meals can also be useful at this time. Holman, meanwhile, advises people to stay informed by following different news outlets. “But also focus on the good things!” he hurriedly adds. The news, he says, can be especially depressing in isolation because it is so negative. Looking up local, but also national and global initiatives can help in fighting this gloom. “There’s so much good happening in the community right now,” Holman encourages, “so it’s also okay if you disengage a bit from the news and focus more on your immediate surroundings.” 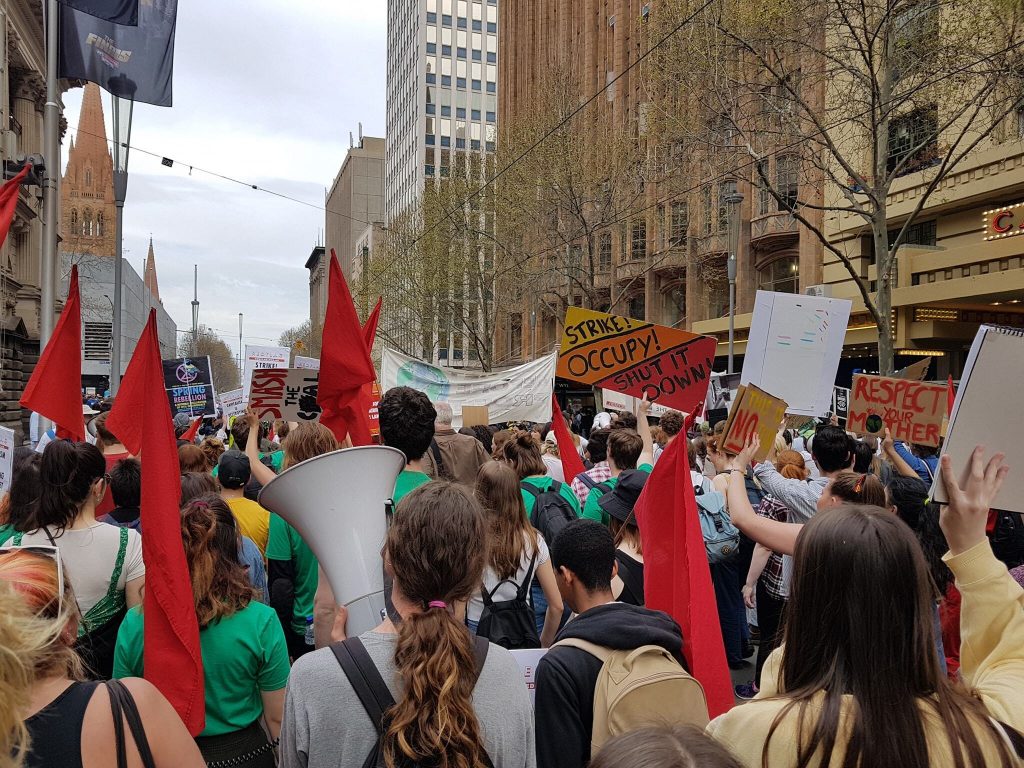 A climate protest in Melbourne before the COVID-19 outbreak. Trask can be seen sporting a sign that reads: “Strike! Occupy! Shut it down!”

All three of these environmentalists acknowledge that with a virus in the air, the streets empty and the newspapers dominated by those two facts, climate action’s place in the news has shrunk. According to Trask, though, that does not necessarily mean that climate action will suffer from it in the long run.

Hopes are that when the coronavirus recedes, worries for the death of our planet will drift up again like dead fish in a polluted sea. In response, all around the globe, groups will regather for climate action. For now, although Holman, Trask and Tax all agree that we can’t have full-blown protests, they urge that climate action must continue in the background. Read, recycle, spread awareness – all so that when the world connects itself into its old whole, environmentalists can exclaim their vital message again. Because in the end, coronavirus or not, with open or closed borders, their fear remains the same. Our planet, they know, is still on fire.

Luna Erica, Class of 2020, is a Literature, Linguistics, and Rhetorics major from Eindhoven, The Netherlands