Whilst Online Shopping Sites Are Doing Well in This Season, Local Businesses Are Not Exactly Thriving. 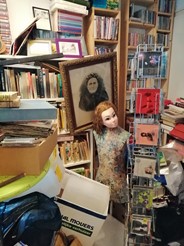 I must say, writing about Arts & Culture whilst the government has just shut down the entire sector is not the easiest thing. As I was about to write something about the opening of the smallest cinema in the Netherlands located in Middelburg (!!!), the cinemas closed, so an opening is not happening anytime soon. Sad.  However, blessed as I am, my father decided to come by this weekend. My dad enjoys risking his life on a regular basis in these pandemic times by traveling around the country looking for antiques like his hero,  Drew Pritchard in the show ´Salvage Hunters´ that can be seen on Discovery Channel. Once in a while, he comes by in Middelburg, to visit me and use my room as a storage. This weekend, I decided to join him, discovering all the treasures antique and second-hand shops in our beautiful city had in store for us.

It is my belief that it is possible to make a few broad categorizations of items in second-hand stores. For example, immediately noticeable in the stores in Middelburg, The Netherlands, and probably the Earth, is the exorbitant amount of doll paraphernalia they house. In multiple shops around the city, these figures, whether they be of porcelain or plastic, can be found lurking behind every corner. What is this preoccupation with dolls that seems to reign in second-hand stores? I tried to find the answer in an article called ´Interesting facts about dolls.´ Although amazed to find out that Barbie’s full name is Barbara Millicent Roberts, it did not give a satisfactory answer to the question. The only time I ever see dolls outside of vintage settings is in horror movies. Indeed, the before-mentioned article states that people´s common fear of dolls has an actual name: pediophobia. This fear originates in childhood, when adults often use them to amuse children, but instead, scares them. The term offered a possible explanation for my initial question. Probably, everybody just wants to get rid of their creepy dolls in these stores whilst in turn, nobody wants to buy them. Meanwhile, second-hand stores have become settings of dusty nostalgia with an air of creepiness themselves, much like the dolls.

Indeed, one of the main reasons for me to go to a second-hand store is for this vivid sense of the past. I just live for the musty smell of vintage shops, which remind of your childhood diaries and your grandmother. In slightly depressing times such as these, this feeling is a good thing to have. Seeing an array of Christmas items displayed in various cupboards and tables might just give that extra boost to get through the semester and reach the end of 2020. Seeing a stack of ´Tina´s from the 80ties (a Dutch girl´s magazine) reminds you how nice it is to not be a teenage girl. Seeing various records can help you to (re) discover music, including that of different regions (like Roel Slofstra´s songs from Friesland).

While it may seem like there is no point to this article, there actually is one.  Whilst online shopping sites are doing well in this season, local businesses are not exactly thriving. The government, with its most recent corona measurements, decided to close down all museums, theatres, and cinemas whilst leaving mass chain shops like the H&M and the Primark open. These measurements are not only a big disappointment for all the museums and cinemas that are adhering perfectly to corona rules, it also makes shopping, including fast-fashion shopping, one of the only forms of entertainment left. If you are going to do shopping anyways, please do it in local second-hand shops. These stores need your support, and it is a great way to entertain yourself, discover new places, and leave your house when on the verge of a mental breakdown. I would not advise you to act like my dad and travel around the country for it, you might have to stick to Middelburg instead. My dad, by the way, purchased a variety of objects, including a tin can from the twenties that was meant to contain a powder to clean false teeth. It will fit in with the 200 other tin cans that are housed at my parents’ home. Knowing that second-hand stores are like a treasure trove that holds items like those me and my dad picked up on, I strongly encourage you to give it a try. After all, you never know what you might find.