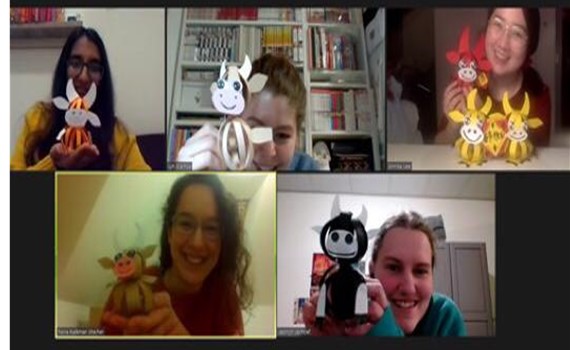 As most of you have already heard about, this year, 12 February, marked Chinese Lunar New Year, also known as Spring Festival. As the date varies every year, it is very important to check the dates every year around January and February as it typically falls between those two months. Lunar New Year is also celebrated in Korea on the same day as in China. However, unlike Chinese Lunar New Year which lasts for two weeks, Korean Lunar New Year (Seollal) only goes on for 3 days- the day before Lunar New Year, the day itself, and the day after Lunar New Year. During those three days, we would travel to our hometown, have a big family gathering and eat traditional Korean food. The highlight of the festival is sebae where young members of the family give a bow to elderly members often wearing a traditional costume, known as Hanbok.

This year, due to the pandemic, I have not been able to be with my family for the Lunar New Year, a big festival in Korea. Normally, if I am unable to pay a visit to my relatives, I would text them first thing in the morning to wish them good fortune and a year of prosperity. However, because I was in Middelburg the whole time and did not check the date for this year’s Lunar New Year,I lost track of the date and forgot to text the elderly members of my family which ended up pissing off my beloved grandmother. Well, she is fine now.

Anyways, I also found out too late that CultureCo organized an online event on the day itself to celebrate Lunar New Year. But nevertheless, I was very curious to know more about the specifics and details of the event so I reached out to two people from the Culture Committee of UCR- Nora Kalkman, a board member of CultureCo, and Annika Lee, whom according to Nora is an honorary board member as she attended most events and helped to organize various events despite not being an official board member of the society.

Was it the first time this event was organized?

If my memory serves me right, there had not been any events like this before. So this was my very first question. And just as I guessed, Nora confirmed, “Yes, there hasn’t been any. Last year, there wasn’t anything.” Indeed, she jokingly added, “Culture Co, as a society, was kind of dead before”

Whose idea was it to organize it then?

It was Annika’s idea to organize it. As Nora and Annika have already known each other for quite some time, Annika came up to Nora to suggest something for Lunar New Year,

Over the course of the interview, I also learned that Annika was a transfer student from Wheaton College in Chicago, Illinois. As I have already mentioned in my previous article (“The Facade of Diversity at UCR”, https://tr.rasa.nu/?p=5464), various cultural events are organized on a large scale at other universities such as the UK campuses where every faculty takes part. So I became curious if this was also the case at Annika’s former school.

Did your former school also organize this kind of event? And if so, how was it celebrated?

“Yes, there was a Chinese Culture club specifically at my school” answered Annika, adding “this club collaborated with the more general Asian Culture club to organize the event”. Indeed, there were quite a few Asian Americans-Chinese American and Korean American-at her school. Annika recalled that the event was often held in a gymnasium with a lot of performances and a bunch of food. Indeed, it was a far bigger event than the one they could do over Zoom. According to Annika, a lot of non-Asian students and the whole faculty took part in this culture-sharing experience and it was very festive at school around that time of the year.

Annika also added that as she was aware that Culture Co was eager to organize something that was not done before, she thought it was a good opportunity to bring this new cultural experience to UCR.

How long did it take to prepare the whole event?

Nora recollected that Annika approached her with the idea way back in October and they had been planning since then. However, when they had first begun working on the plan, they were aiming for an in-person event. As such, when UCR announced that everything will be online for at least the first half of this new semester, they had to shift their plan all of a sudden. So the actual physical preparation of the event only began a week before the event.

What did you guys do at the event?

At the beginning of the event, they talked a little bit about what Chinese Lunar New Year is and the legend associated with it. Furthermore, they also learned about the word “luck(福)” in Chinese characters. In fact, in China around Lunar New Year, you can see the decoration with that letter everywhere you go. The main highlight of this online event was crafting paper oxen as 2021 marks a year of the ox, one of the zodiac animals.

The Year of Ox and Chinese Zodiac Signs– For those of you who are not familiar, the Chinese zodiac, or Sheng Xiao (生肖), is a repeating 12-year cycle of animal signs and their ascribed attributes, based on the lunar calendar. In order, the 12 zodiac animals are Rat, Ox, Tiger, Rabbit, Dragon, Snake, Horse, Goat, Monkey, Rooster, Dog, 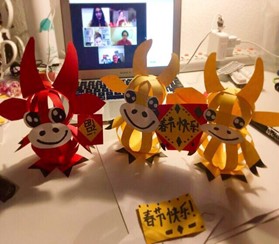 Pig.  Since the Chinese zodiac cycle repeats every 12 years, the last year of ox was back in 2009. Indeed, there is an animal representing each year, and the Lunar New Year, also known as Spring Festival, marks the transition from one animal to the next. However, as the “year” is defined by Chinese lunar calendar, not the Gregorian year you are familiar with from Jan. 1st to Dec. 31st, the dates of Chinese Lunar New Year vary every year but will fall on a day in January or February. As your Chinese Zodiac sign is determined by your birth year based on the lunar calendar, if you were born on a day during March to December, it is easy to figure out your zodiac animal sign, but for people with birthdays in January or February, there are bigger chances of mistaking their signs.

As Chinese Lunar New Year goes on for two weeks, at the time of the interview, Nora and Annika were planning the second event for the second week of Chinese Lunar New Year in collaboration with Litra. They had several ideas in mind at the time of the interview, one of which was to write Chinese poetry and put it on the red paper that can be passed around in Middelburg to decorate our doors with. Indeed, Chinese people would hang their poetry, specific couplets on their doors during the festival.

How do you normally celebrate Chinese Lunar New Year?

I was also curious to know about how Chinese people actually celebrate this event so I asked Annika what she normally does for the event. She replied, “As I grew up in the states, I did not celebrate it for the first half of my life.” She only started to celebrate it after she turned nine when her family moved to China. Indeed, around New Year, the whole country is steeped in festivities and as such, it was very natural for her family to slowly incorporate it into their family tradition which, previously, had largely revolved around German and American culture.

It was only in recent years after she became an adult that she began to have renewed interest in this festival. So only recently, she started to teach herself how to cook traditional food and read more about how it is actually celebrated in mainland China.

I also asked Nora if she was familiar with Chinese Lunar New Year prior to organizing this event.

She responded, “Well… I didn’t know the specifics. But I was aware of it. I went to school for a few years in the states as well. And there was a  big community with a lot of Asian Americans. So around the time of Lunar New Year, we would at least acknowledge it and at school, we would do crafts related to the festival”.

How many people were you expecting to turn up for this event?

A total of 6 people showed up for this online event and I was curious if that number was below what they expected. Nora replied, “It was hard to calculate as it was online especially when you need material for something. We had no idea how many people would turn up”. Indeed, every participant had to prepare the material needed to make paper oxen.

Also, what complicated the matter was the fact that none of the board members were in Middelburg due to the pandemic. Therefore, delivering the necessary material to everyone’s door, which they normally would do, was not an option. As individual preparation was needed, Culture Co posted the list of necessary material on Facebook page a week before the event. They tried to limit it to things that they figured were common household items such as scissors, paper, glue.

Are you guys planning to host it again next year?

They both enthusiastically answered, “Yes, some form of Chinese New Year next year”, adding “hopefully, in-person”

What is your next major event?

As soon as I asked this question, Nora answered with a lot of enthusiasm. “The major, major, big event is a Culture week in week 6, which will also be online”. She looked very excited about the event. Furthermore, she also informed me a little bit about the origin of Culture Co. “There used to be only culture weeks back in the days but they grew and grew and eventually, culture week became a Culture Co”

This big event, the hallmark of Culture Co which was what led to the birth of this club, unfortunately, could not take place last year as it coincided with the onset of the pandemic in the Netherlands.

What are we doing during Culture Week?

The whole event lasts for a week, Monday through Friday. There will be a lot of events in collaboration with a lot of boards, for instance, cooking workshops with cooking society, Zumba with sports co, movie night with Prism, and Elliot dinner just to name a few.

This event will remain online partly due to the Covid regulations but also to make it as accessible as possible for those students who are not in Middelburg.

It was both very fun and insightful chatting with Annika and Nora from Culture Co and throughout the interview, I was greatly impressed by their enthusiasm and commitment to the club. They also organize online bible sessions on the first Sunday of every month which anyone is welcome to join. Indeed, I attended it for the first time this February and that was how I got to meet Annika. I think it goes on to show how even in uncertain times like this, it is still possible to forge new connections and interact with people from different cultures.  Please stay tuned for the upcoming Culture Week by Culture Co!

Many thanks to Nora Kalkman and Annika Lee for making this article possible.