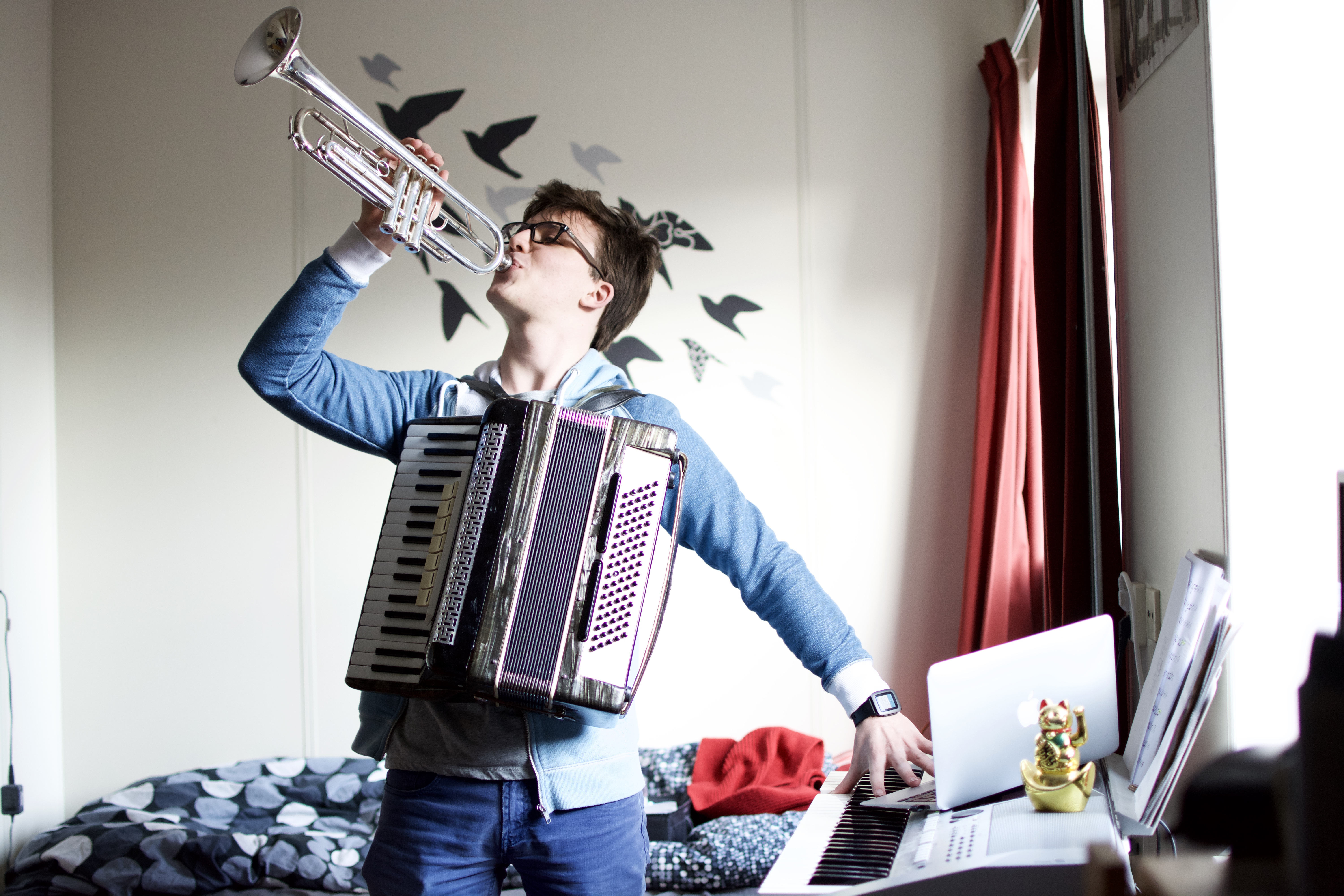 My name is Thomas Hitchcock. I mainly play piano, the accordion, and I compose.

When I was five, this kid, he was eight, showed me how to play Smoke on the Water. I thought he was really cool, being eight, and I was practicing those three or four notes for weeks. Once I did it, I wouldn’t shut up. My parents said, please, learn something else – and they put me on the piano. But even during piano lessons I would still play Smoke on the Water.

The piano was just the instrument in the house; it was either that or the guitar. The guitar hurt my fingers, and it was difficult, and I was a whiny little child. The piano doesn’t hurt you when you play it!

Accordion was after I had an eye operation, and I had to stay away from screens. So I thought, what am I supposed to do now? My dad was willing to help me fund an instrument if I was actually going to learn how to play it. My first accordion was a broken piece of shit, but now I have this new one, which is only slightly better. It’s an old Polish student accordion, which I’m only just noticing actually has some historic value.

As for composition, I got into it in high school, doing my IB personal project. I had this whole thing where I wanted to make a game, and I started making music for it too. I got way carried away, and suddenly I had a soundtrack for elements of the game I hadn’t even made – I ended up making parts of the game based on the music I had already composed. I got super sidetracked, and thought, this is really fun.

I just shelled out money on a trumpet, and I would like to see myself competent in it.  But it’s difficult; the method is entirely different than the keys and notations I have gotten to know on the piano and the accordion.

I still would like to get into the guitar, but it’s such a challenge. The ukulele has four strings, the guitar has six, I only have five fingers…it just doesn’t add up in my head. It just doesn’t work.

With composing, I do keep in mind the ideal job I would like to have, making music for games. With the piano, I just find it really satisfying to be able to crack out something, and just play. I don’t really want to professionally, I kind of just want to make less mistakes – I’m working on that. I usually get ahead of myself, but that’s part of the fun too.

I generally compose music for the same kind of hipster-y, spectacled, game obsessed people like myself – that’s the type of listener base I would ideally like to attract. I’d also love to see my music in some older, arcade-style game – I find those have really fun, simple soundtracks. Anything I would want to play myself, honestly.

I really like soundtracks, anything that’s interesting from a composition or motif standpoint – I’ll spend a lot of time studying that. I very much consider how the music I listen to could factor into my work, even unconsciously. I try and learn from it too, like the way in which some songs go totally quiet for a short moment and suddenly picks up the tune again a very short moment after. I really like that effect, but am not completely great at making use of it myself yet.

You really can learn how to make music from the things that you listen to – even pop music, like Adele’s newer stuff, or Green Day, is a place to start from, deconstruct, get inspiration from. I find that listening to music becomes more enjoyable when you kind of know what goes into making it.

Playing piano and composing are different – with the piano, there’s the pressure of having to take what it is you start out with and work with it. A lot of times I find myself consciously trying to keep away from certain melodies, to ensure that my improvisation is original.

With composing, you have the liberty to take something, or different elements of it, and see where it all goes. Even though you may feel like you can never make anything as good as the stuff that’s already out there, you have the freedom to take your time and really produce something of your own. In the end, you can find yourself with a really cool song. It’s satisfying, but also just annoying as hell and I hate it!

There was one time this guy playing the accordion on the street, and I was coming home from school (with my accordion, don’t ask). I just joined in on his chord progression, and we just kind of played together for a while.

A lot of making music is just doing it. Even if you’re not musical, it’s something that you can build up, to a certain extent. I’ve also found that it’s helped me to challenge myself technically, by limiting the types of sounds and beats I play around with. You can definitely keep things simple and end up with some pretty cool stuff. It really forces you to become flexible and more creative.

My earliest compositions still haunt me, but it’s a good reminder of where I came from. That process of going from bad to better, and having the confidence to go through with things is really crucial. When you spend the time on something, and you can achieve great things with it. It sounds cliché, perseverance, and if someone had said it to me I would have completely ignored it. But I would not be saying it now if it weren’t true.

Is now when I get to plug myself? SoundCloud! Like, follow, subscribe – twjgamemusicguy! I’ve been putting up a lot of stuff, I make cool songs and uncool songs. A lot of them are remixes from games, some are my own writings and compositions.

There’s this one thing – it’s counterpoint, you know, harpsichord music with all these crazy weird rules, and synthesizer music in the background. My most recent projects have been joke projects – I took the music from the Albert Heijn commercials, and made it into a rap beat, and suddenly I found myself thinking, shit, why does this actually sound good?

I would probably play more than my copious amounts of video games. I’d probably get super obsessive, and that would kind of be it. Making music actively challenges me creatively – I can’t really think of anything else like it.