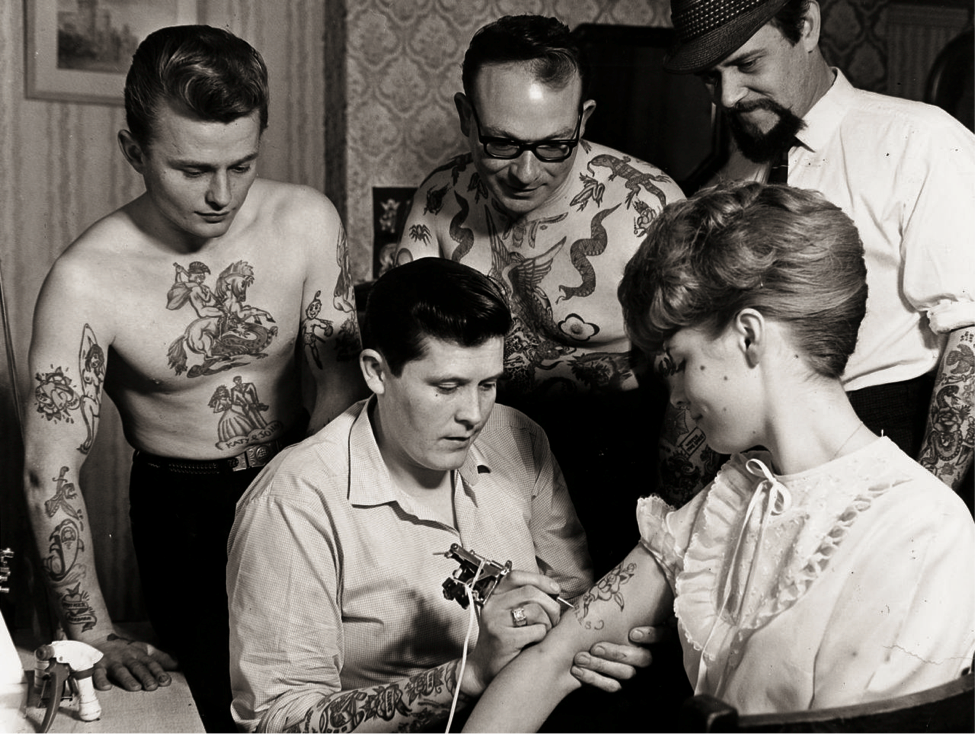 An inside look at UCR’s tattoo culture

Many people live with the idea that their body is not simply flesh and bones, but rather, an intricate canvas that can be used to express a deeper layer of their personality. They use this space wisely, crafting beautiful tattoos that will remain with them forever. These tattoos are often carefully chosen, some for their special and delicate meaning, others simply because they are beautiful in their nature.

If you have long wondered who at UCR has ink decorating their form, wonder no more, because we have compiled some of your fellow classmates’ most amazing tattoos. Read on and find out about the stories behind them, as you admire these works of art:

“The flower on my ankle is my second tattoo, and I got it in Thailand (I totally found myself in Asia and got a tattoo to commemorate it). My friend was getting a Sak Yant tattoo, and he encouraged me to get one as well, but I was most definitely not going to get a Sak Yant. I looked around for some studios in Bangkok that I liked. Two days before we flew back home, I found Lone Wolf Studio Bangkok and their art was a really cool fine line style. I didn’t want to miss out on a tattoo like this, so I got a lily flower tattooed the next day. Shosanna (similar to my name) means lily in Hebrew, so that’s how I got to it, but the actual meaning is not significant to me at all. It’s the whole experience around it (and the style of the tattoo) that makes it my fave tattoo out of all of them.”

Suzanne Oostdam, Class of 2019, is an Environmental Science and Human Geography Major from Breda, the Netherlands. 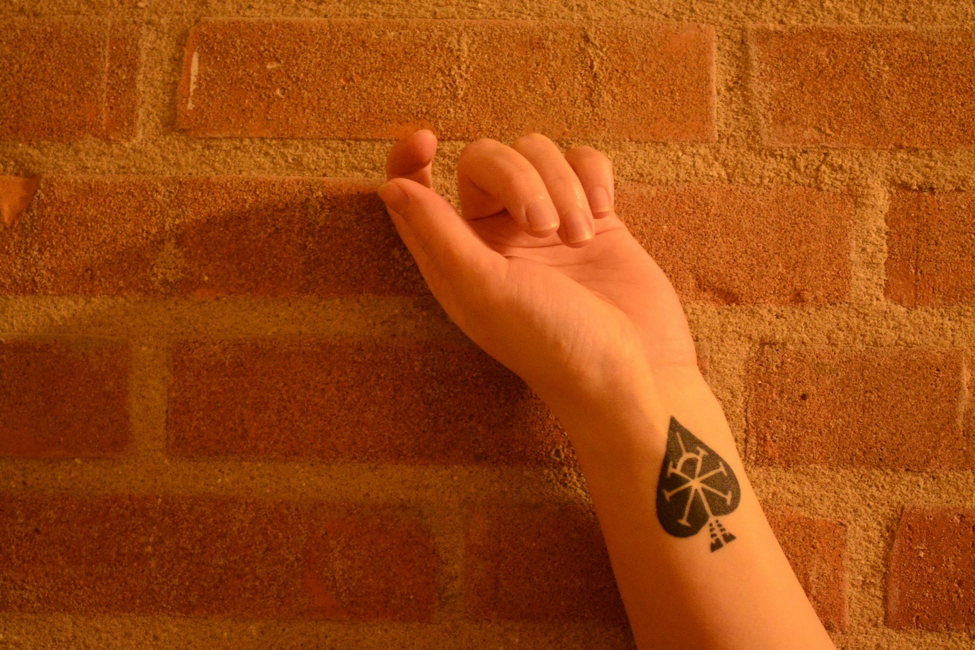 “I designed the logo inside the ace myself during a vexing moment in class. It wasn’t at first meant to be tattooed onto my skin, but I liked it so much that it ended up being incorporated into the final design. It’s constructed from the phrase “I am fire”, which I broke up into lines and circles, which then combined into what you see [above/underneath/left/right/wherever the picture is].

The ace of spades, on the other hand, is a reference to my sexuality, and thus turns my tattoo not only into something that represents me, but into a pun that can be used at opportune moments as well. No matter where I go, I always have an ace up my sleeve.”

Sasha Talmon, Class of 2019, is a Literature and Philosophy Major from Zierikzee, the Netherlands. 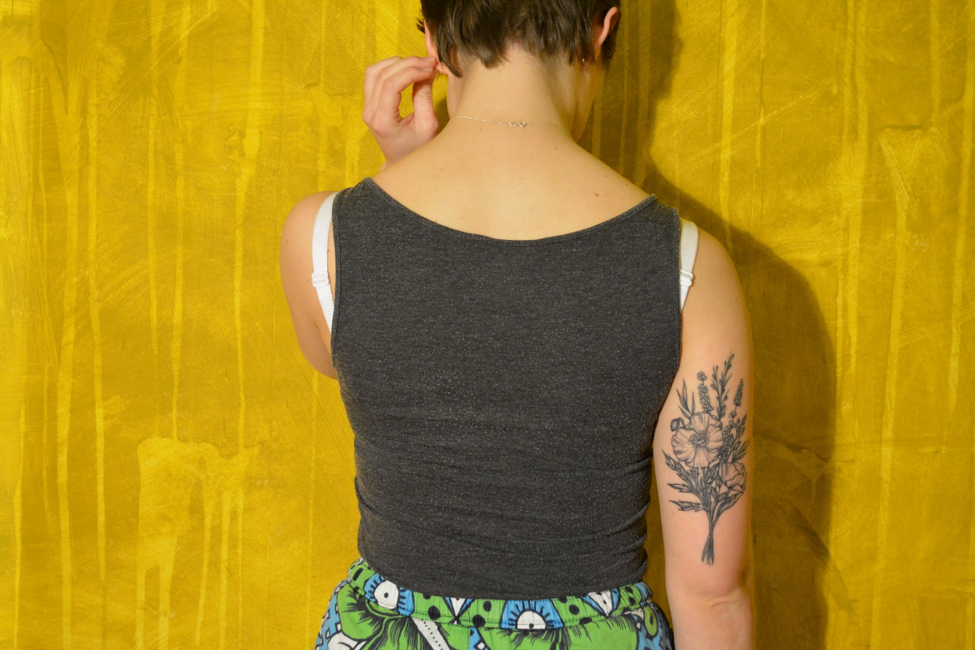 “I’ve been wanting to get a tattoo for years but I wouldn’t let myself get one until the idea of what I wanted had stayed the same for a year or so. The idea of a bunch of wildflowers doesn’t really have a deep hidden meaning – I felt that stories with deep meanings and emotional memories should be told naturally and not be prompted by the ink I wore. I chose the poppy and the lavender because they aren’t your usual vase flowers – if you were to try, the poppy’s petals would be hanging sadly within ten minutes. There was something about that vulnerability, coupled with the way in which they keep coming back every year even if you pull them out, that drew me to the idea of these flowers in particular.

So the hunt for an artist started, and last summer, at some point my cousin pointed me to a young Dutch artist in Amsterdam. I called, made an appointment, waited half a year, and got it done! Fun fact – aside from a pre-sketch made by a friend, off of which the artist was going to base her design, I had no idea what the tattoo would look like, nor how big it would be, until five minutes before the machine started buzzing.”

Tara Reece, Class of 2018, is a Music Performance Major from Tanzania. 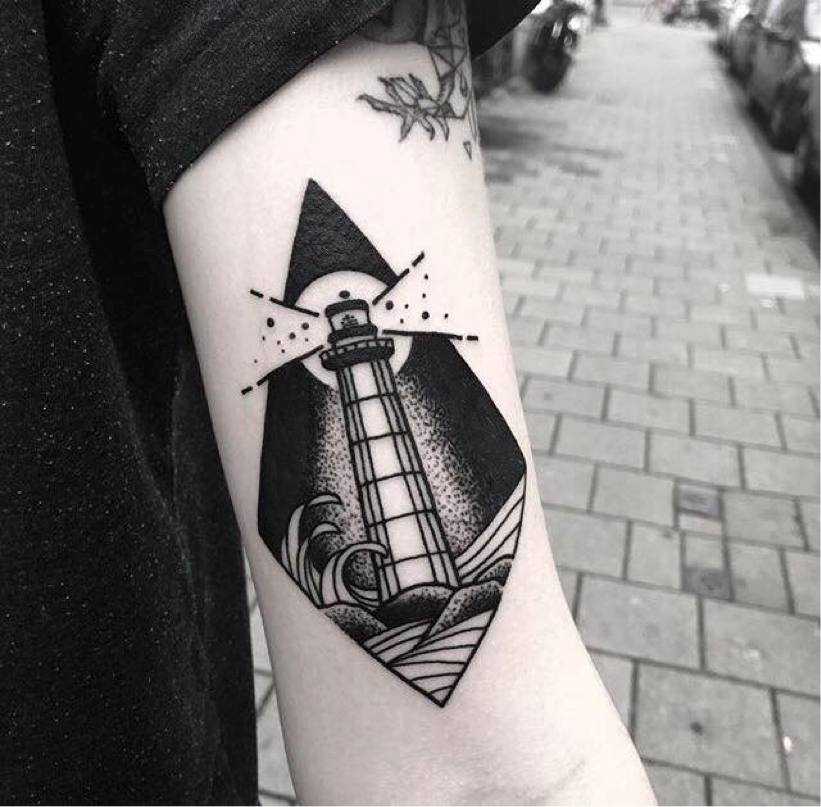 “This is the second tattoo I got. The one I like the most (although it was very difficult to choose), and the one my mom dislikes the most because it’s more visible than my first one. I could always see a lighthouse from my bedroom window, and during my youth I spent many hours watching its lights go on and off. That was always very calming. Also, I just think lighthouses look pretty cool.

I decided on the design before I attached any meaning to it, so I guess it doesn’t have the deepest of meanings.”

Niels Van Kleef, Class of 2019, is an Anthropology and Sociology Major from Veere, the Netherlands. 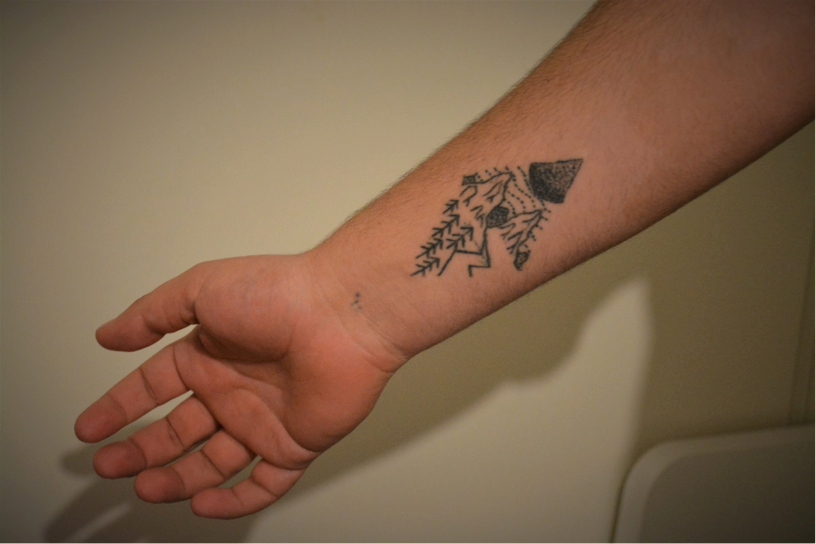 “The one on my arm is a landscape with mountains in the background and trees in the front, and the sun way up high. It is a reminder that we’re nothing but wanderers on this planet and that we should strive to see every bit of it.” 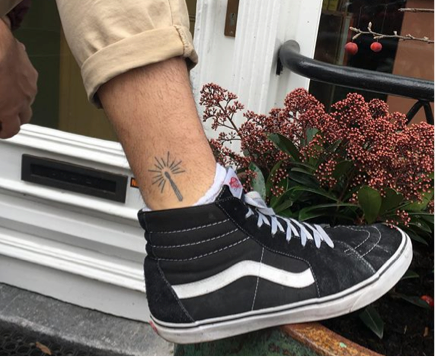 “The match is a reference to Stoic philosophy, through a song by my favorite band. The band Counterparts has a song called ‘Burn’. The point of the song is that the singer has decided that he isn’t going to try to influence things that happen to him any more. He says something along the lines of: ‘if I die tomorrow, then so it shall be’. The song ends with the words ‘be the burn. burn me alive’, which is why I got the match.
All this refers to Stoic philosophy because stoicism basically says that everything is happening around you, whether you try to change it or not, so why feel sad about something you cannot control?
Inner peace is found through the realization that things are going to happen either way. The lead singer also said in one interview, ‘look, I’m not telling kids to go out riding a unicycle next to the Grand Canyon or whatever, I’m just saying that if I were to die tomorrow, I have peace with that.’”

Yarí Syed, Class of 2019, is a Life Science Major from Deurne, the Netherlands.