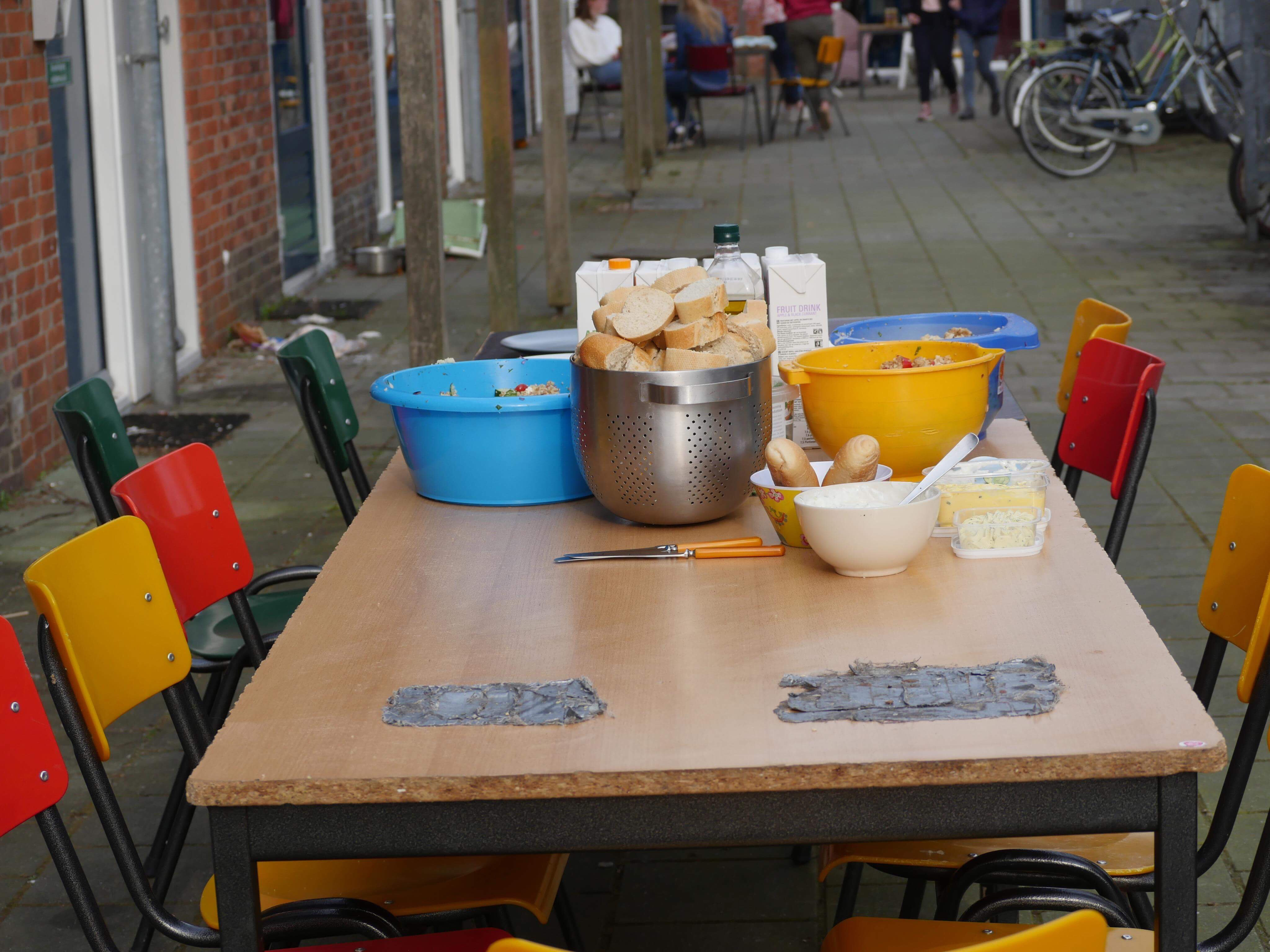 It seems to have become a recurring theme: every summer, Bagijnhof residents are seen packing their belongings. With a lot of swearing and struggling they attempt to maneuver their furniture down the narrow Bagijnhof staircases. As a student living in Bagijnhof myself, this yearly trend does not go unnoticed. Since I first moved into B8 two years ago, the ‘human geography’ of the Bagijnhof ‘courtyard houses’ has changed drastically. This is partly due to graduates moving out and freshmen moving in. But also because of soon-to-be second and third years leaving the social, yet chaotic environment that Bagijnhof provides, for the peace and quiet of Bachtensteene, Koestraat, or Roggeveenhof.

I reached out to fellow students who have experienced living in a house, as well as living in a studio to gather their thoughts and preferences on the very important question: a hallway or a house?

“I decided to move to Bachtensteene to have a little more space to call my own,” Madelief Feenstra, 20 years old, tells me. Despite having enjoyed living in Bagijnhof for two years, she felt it was time to “experience the ‘living on my own’ thing a bit more”.

Madelief is not the only one who was looking for a little more privacy in a student accommodation. Gabrielle Gonzales, a 4thsemester, says: “Having my own space also allows me more alone time when I need it.”

While UCR students living in Bagijnhof houses also have their private room to call their own, many feel as though there is still a lack of having a private space. “It’s my own space,” one 20-year-old ex-resident of Bagijnhof emphasizes about his new room in Bachtensteene.

Naala Vanslembrouck, a fifth semester, is from the last generation to experience the secondary locations, remnants of a time when the four main UCR campus locations were overflowing, and extra places of residence were needed. In Hof van St. Pieter, Naala lived together with 14 other first semesters. “It’s a lot,” she admits. “At breakfast you see them. At lunch you see them. At parties you see them. There’s no break.”

Lack of privacy, however, isn’t the only drawback that drives students away from shared houses. “There were several factors that weighed into my decision to move,” Gabrielle considers, “but the main one would have to be the cleanliness (or lack therefore) issue I’m guessing everyone experiences at Bagijnhof.” She doesn’t need to use the words explicitly. As a resident of one of the houses faced with this ‘issue’, I have also spent sleepless nights in fear of the scratchy noises in the walls and floor where the rodents hide. “Dirty dishes are one thing,” Gabrielle sighs, “but rats? Oh boy…”

Poor hygiene and the chaotic clutter of common rooms can, in turn, lead to tension between housemates. While ideally, one could return from a day of classes to a relaxed home, in reality this is not always the case. “I decided to stop coming back to one stressful environment from another stressful environment,” one interviewee states. When Naala was still living in a house, she, too, would occasionally feel this in-house tension. “I couldn’t go back to fighting about dishes,” she says, shaking her head.

While the above paints quite a negative picture of student houses (a place of dirt and stress, a place to escape) some students still seek the hustle and bustle of Bagijnhof. Roosmarijn Klopper, a 21-year-old third semester, moved from her hallway in Koestraat to a student house in between her first and second year. “For me it was too much privacy. It made me feel a bit isolated,” she says about living in Koestraat. As a music performance major, Roosmarijn initially chose to live in Koestraat, since it offers a better isolated practice space rather than Bagijnhof, that is known for its thin walls. However, she soon realized she “really missed having others around.”

Esther Kromah, 20 years old, was also attracted to the social aspect of Bagijnhof. “I love being able to be social with people whenever I want to and not even having to leave the house,” she states. Although Esther occasionally misses having her own shower and space to be alone, she is glad to have been able to experience the “more stereotypical student experience” she believes student houses give.

Even though many of my interviewees chose to move away from their student house, they still look back positively on their time in the shared living. “I absolutely recommend it to first years as a way of tumbling head over heels into the UCR bubble,” Madelief states about Bagijnhof.

“I did love the space, the atmosphere, the people,” a student remembers. “You always have a feeling of being at home.” Gabrielle also recalls the familial feeling of sharing a house: “After three semesters there, I’ve come to consider my housemates as my family.” She pauses before jokingly adding: “The eating-your-food, barging-into-your-room, and nerf-gunning-you-down type.”

Despite the hassle of moving in and out, my interviewees are happy with the choice they made and consider having experienced both a house and a hallway as an enrichment of their student experience. “I can say with absolute certainty that one of the main reasons my first year was such a blast was because of Bagijnhof,” Madelief says. “On the other hand, living in Bachtensteene is perfect as a third year, because you already have an established group of friends or just feel comfortable speaking with anyone, really.”

While Roosmarijn missed social interaction in Koestraat, she doesn’t consider having lived there a mistake. “I would still wonder what it would be like if I had lived at another campus location with your own space and kitchen and bathroom.”

To students considering moving from a house to a hallway Naala advises that they “try it out for a year.” Give it a chance and perhaps you’ll end up loving it. On the other hand, Esther suggests: “if you really want to live somewhere, don’t let the prospect of moving stop you,”.