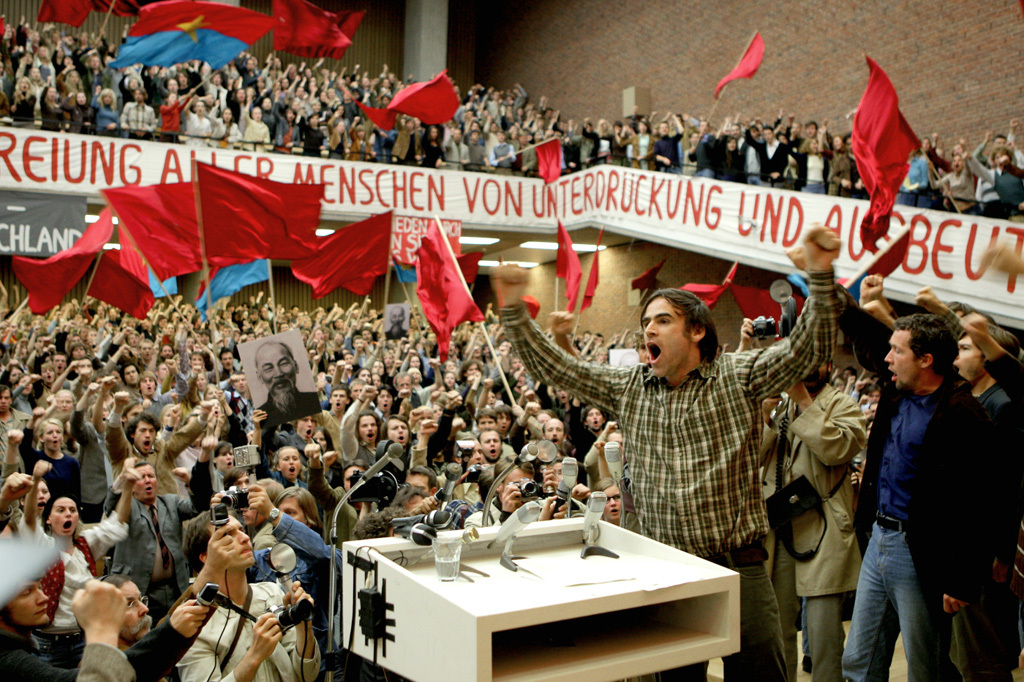 When you’re depicting history in movies, or portraying a historical event, making a biopic or period-piece, you are always confronted with walking the line between drama, historical accuracy, or even documentarian type filmmaking. A great example of this conflict is the 2008 German film, Baader Meinhof Complex. Now, German historical films have a good reputation for historicism with quality films like Das Boot, Das Leben Des Anderen, and Stalingrad (1993). These films are representative of the more sober approach to history, not falling into the trap of romanticised or overt exaggeration like Hollywood is often criticised for. This film is no different, highlighting a dark era of Germany and Europe as a whole. The 70s was an era of terrorism across Europe, with groups like the aforementioned Baader Meinhof Gang in West Germany and Red Brigades in Italy, reflections of the Cold War struggle. The Baader Meinhof Gang, also called the Red Army Faktion (RAF), emerged from student upheaval in a post-fascist West German society and criticism about the lack of confrontation with the Nazi legacy. In fact, under Adenauer, many ex-Nazis had kept high positions within the government. In fact, as the film begins in 1968 with student protests, the chancellor at the time was Kurt Kiesinger, a former Nazi party member and accused of spreading anti-Semitic propaganda for them. This movie depicts the rise of the RAF, their most notable actions, and their collapse as they are arrested, and how the consequences of their actions bear down on them in the end.

The director of this film, Uli Edel, does not have a notable career like that of Das Boot director Peter Wolfgang, who went on to make several American action blockbusters. Edel has, however, worked on several historical miniseries but only has one other major film of note, Body of Evidence, a raunchy film that spawned from the success of Basic Instinct. It does not have much relevance to this film but all I will say is that it won various raspberry awards (awards given to bad movies), is on Roger Ebert’s most-hated movie list, and is probably the reason why Madonna did not have a long-lasting movie career. However, I think patterns always arise in a director’s film through their approach to filmmaking and eccentricities that reappear time after time.

When it comes to this conflict of depicting history movies, and the conflict between forms of filmmaking, Baader Meinhof Complex, I think is a good example of misstepping on each front, not leaning into one or the other but also never walking the wire well enough to present either in a good manner. Its characters are so off-kilter and clearly dramatic – rather than serving historical plot-telling – yet they also lack any depth, sympathy, or understanding to really make use of that drama. The history is there but while often showing events in a cinematic form, it is extremely vague and often rushing from scene to scene to show important events without much of a transition in between.

Baader Meinhof Complex seeks to focus on a plethora of characters and many other real-life figures who interacted with them. In their efforts to then cover each of the notable actions they did and the historical events within the period that affected them, they undermine the characters they seem so desperate to develop and undermine the structure of the film itself. Events like the student protest at the beginning of the film, the assassination of a political leader Rudi Dutchke and the training of the RAF by PFLP are all interesting in the perspective of historical studies but completely irrelevant to the rest of the film. Comedic interactions between the RAF members are perhaps attempts at more sympathetic elements or might (though unlikely) reflect their real-life personalities but serve little purpose. While evocative scenes of protests with brutal crackdowns and RAF members being chased down by the police and shot at might be potent by themselves; within the larger picture they have a far more muddled impact.

The movie seems to cover a large period, yet it never specifies the timeline or the progression of time, nor does it keep track of time in its characters or consequences. Most notably an event is recalled in the third act that has extreme consequences for all relationships between all the major characters and is a source of great conflict in the ‘climax’. Yet, prior to this, the event was rushed through in a very quick montage in the middle of the film and no mention or concern or emphasis or problematic aspect was made of it before this third act character break-up drama was inserted. Of course, unlike a buddy cop film, they don’t get together in the third act or have a make-up climax where the two resolve their differences and defeat the villain. They are the villains, which immediately presents a plethora of screenwriting problems that the filmmakers often seem to ignore. In the end, this ‘critical event’ is never let go and the culprit kills herself and is made into a martyr. But it means nothing within the context of the story because the film failed to establish why it was of such concern to the terrorists. In all their dialogue they never fully established the moral compass of these terrorists, leaving the audience to assume that they were without remorse.

The movie also fails to make any point or establish any moral by the end of the film. Now, in a historical film, this doesn’t necessarily have to be a problem. We can focus on history and we don’t have to force a moral out of it that clearly does not exist in the real-life events it depicts. But in a movie so concerned with drama and character which it emphasises at the cost of history when it fails to succeed at this history – and has no moral or message to leave the audience with after the movie – it fails to leave much of an impact and all. All the movie-goer is left with was a film with little drama or character nor moral to make note of nor with an informative history that they might remember. Instead, it just becomes a collection of scenes, of dramatic re-enactments of small historical fragments, fitting of a BBC, NPR, or National Geographic documentary piece on TV, but not of a full-fledged motion picture. As Baader Meinhof Complex shows, you can’t always have your cake and eat it too. As a filmmaker, you can’t be indecisive between documentary and drama because when you choose to walk that tightrope of historical films, you best have a direction in mind.