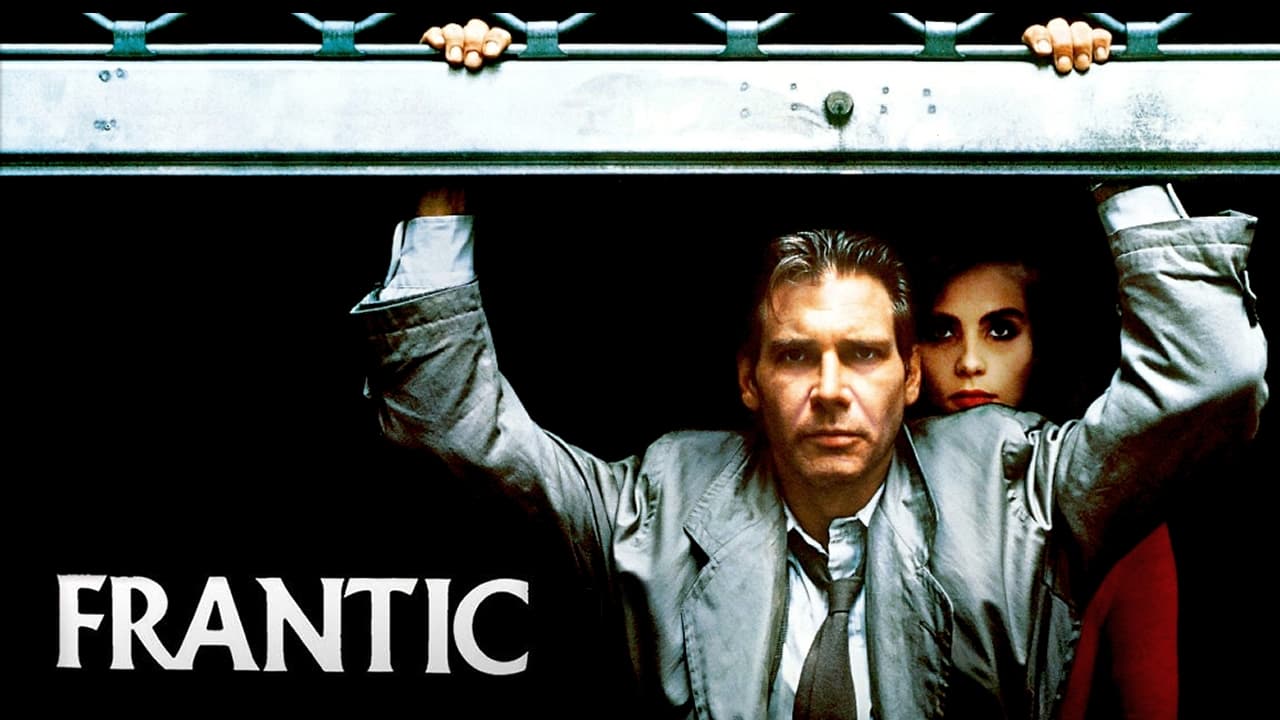 Any international who’s moved to the Netherlands has undoubtedly had to face some of the weirdness/awkwardness that comes automatically with being a stranger in a foreign country. Every place, every country has its own unique elements that can make it intimidating for foreigners, visitors, tourists, expats. As someone who’s moved houses 10 times in 20 years, spending 5 months to 5 years in one place, I have had to deal with adapting to foreign customs a lot. Luckily for me, in most of the places I have had to live, the dominant language was either Dutch or English. Then again, even if you speak the language, the foreignness of the place doesn’t disappear. The local and national culture, the environment itself, the people, the infrastructure, the habits you have to adapt to live there. Even on vacations, we constantly have to deal with the fact of being completely alien to the place we are visiting.

Frantic, a 1988 thriller film, tries to utilize these exact anxieties. The basic plot is that Dr. Richard Walker (played by Harrison Ford) travels to Paris to attend a conference. When his wife mysteriously disappears, he has to navigate this foreign city and country to discover the truth behind her disappearance. Although it is set in Paris, the film luckily avoids all the major tourist sites of the city, instead bringing the viewers through the suburbs, the urban alleyways and the dingey bars around the city. Akin to watching Taxi Driver, The Untouchables, Heat, or The French Connection, the city is at the forefront, and provides much of the visual interest in the film. (A contemporary example would be the grimy pre-gentrified 80s New York shown in Joker, which is in-part an homage to Taxi Driver).

Neither does the film depict Paris in a glamorous light, but instead emphasizes the monotone and muted greys of every street corner – the dull hotel floors that all look the same, the stuffy airports that you just want to leave and the dark and dreary parking garages that look like they’re always dripping wet. Watching the opening scenes of the film, set in a hotel lobby and its hotel room, the production design immediately caught my eye; it did a great job of accentuating the look of hotels, with their cheap decoration and labyrinthic design.

The best horror movies manage to make everyday objects scary. The best thrillers, however, manage to make the most average and dull places intensely frightening and suspenseful. In Frantic, this effect is present, for example, in the endless streets of beige or cream-colored apartment buildings with all the same brickwork features and arches, intended to impress a certain grandiosity. These buildings you see in almost all major European cities, yet they never cease to be an eyesore. It is this sort of mundanity that is given a new life in the film, by contributing to the visual language of the thriller. It is this typically European urban terrain that the main character has to navigate through.

Thrillers heighten the casual and mundane. Frantic excels in this regard, taking an everyday man and putting him into an extremely stressful situation which he barely manages to escape. The same applies to its ‘action sequences’ which can elevate even the most restrained chase scenes into an adrenaline rush. That is how The French Connection can make a car barreling down a road (and almost into a stroller), following a New York metro, more suspenseful than any Fast & Furious car chase. In Frantic, the car chase that occurs in the parking garage and the music that accompanies it (by Ennio Morricone) gets the heart racing even though the cars never come within less than 30 meters of each other. The car chase is not so much a chase as a brief interlude travelling down a traffic-laden boulevard. The realism of the ‘action’ is what helps us be so invested in the film, because it is how any person would react in the given situation. For the most part, you forget what the tension is actually about, it’s only the characters and their survival that you are concerned with.

After a while, however, the foreign nature of the surroundings and the people wears off. We become more intimately involved with the two main characters; the film shifts its focus onto their interactions and lets them drives the story. Ultimately this represents a problem for the film: the unique element of using the foreign setting to drive the anxiety gradually disappears. Meanwhile the plot is for the most part absent from the film, and the mystery of who, what, why is muddled and never built-up effectively. Even the main drive of Harrison Ford’s character (to recover his wife) is not something we’re extremely invested in; we have only spent a few minutes with the two of them. After a while, the wife’s kidnapping is ignored by the movie itself in favor of Harrison Ford and a streetwise stubborn French student, Michelle, played by Emmanuelle Seigner. Admittedly their chemistry is intriguing, with their starkly conflicting personalities, making for a few funny scenes and also some which make us question Michelle’s priorities. Unfortunately, her character arc is cliché and a bit forced; as the climax rolls around you know exactly what’s going to happen to her.

Frantic in some ways follows the typical thriller beat but still manages to utilize the anxieties of being stuck in a foreign country to a satisfying degree. When I say, ‘typical thriller’, I don’t mean to denote its quality, only to remark how the plot, pacing and writing matches other thrillers. As a thriller it is thoroughly exciting. It keeps you on the edge of your seat throughout and keeps raising the suspense. The plot takes a backseat to the suspense, meaning that you usually don’t end up questioning what is happening, at least not until the movie is over. Looking too deeply into what the plot is about would ultimately be disappointing; it is not exactly a unique story nor is it resolved in a unique way. The fun is in the thrilling experience of it, regardless of whether or not a re-watch would be anywhere near as enjoyable.

A disclaimer if you ever end up watching the film: I do have to point out that Frantic was made by Roman Polanski who, like Woody Allen, is facing legal charges. In 1977, Polanski was charged with sexual assault of a minor and was arrested. Awaiting his final sentencing in probation and realizing he was likely to be imprisoned, he fled the country as a fugitive and eventually moved to Paris. Officially, he will never be able return to the US (a recent extradition attempt solidified this). From what little I’ve read of the case (and others) it is very fucked up. Reading more about actors and directors of the past (and way too many from recent times) makes it really difficult to look at their films the same way.

There’s an ongoing debate on how to talk about films with complicated contexts. For example, much older films like Birth of A Nation and Gone With The Wind, while praised by film critics, harbor extremely racist sentiments. And how do we approach world-famous film stars or producers who’ve been exposed for sexual misconduct – do we censor their films which previously ranked among the best? There is no clear answer to these questions –except maybe that we need to stay conscious of the context in which they were produced as well as the controversies that surround them.