Out & About Visual Journalism 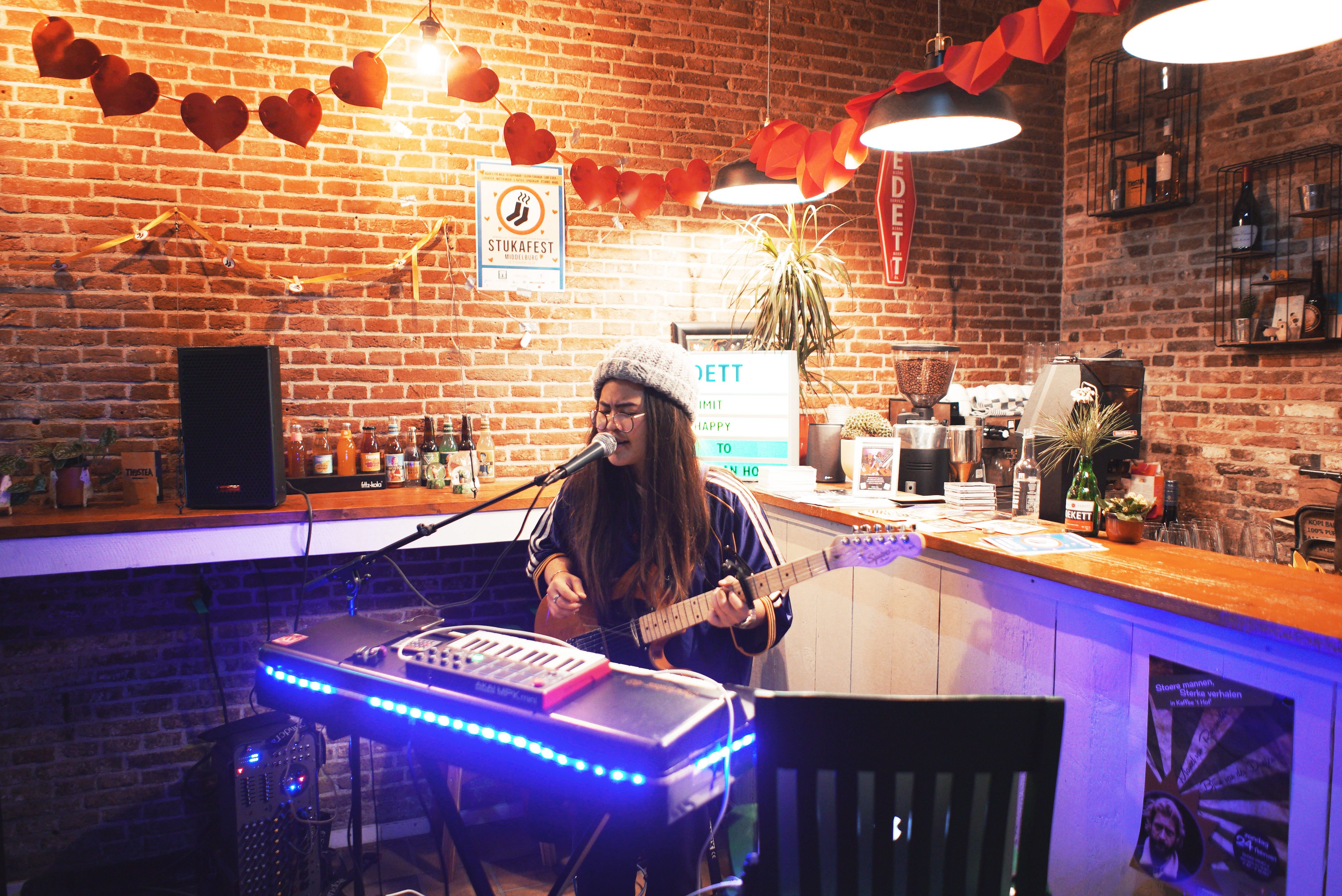 Another edition of the student-oriented culture festival Stukafest has come and gone. Once again, we were treated to a variety of artistic performances on a small, intimate level. Give-or-take a week after the festival seems like a perfect time to reflect on some of the acts of the evening filled with music, fairy-lights, and heartfelt theatrical expressions (to name only a few).

Aidan and the Wild

As the simplicity of Indie-folk music has been, and will always remain a guilty pleasure of mine, I decided to first check out Aidan & The Wild. While listening to some of their recorded music online before the performance, I was expecting a full indie-folk outfit to perform, due to the full sound of their discography including bass, multiple guitars, a mandolin, percussion, and gorgeous backing vocals. For this reason, I must admit that I initially felt slightly disappointed in seeing the front man of the band perform solo instead. Besides, the performance took place in ‘t Gasthuis, which is the adorable elderly home we always pass by on our way to or from Roggeveenhof. This surely created a very welcoming ambiance when we entered the location, but the number of elderly people in the audience unfortunately also made for an accompanying concert of coughs and complaints.

This being said, the act was surprisingly entertaining. The singer-songwriter managed to not get too distracted by the noise coming from the audience, and our first-row experience allowed us to closely perceive his impressive guitar-playing. I noticed right away that he sounded somewhat like The Tallest Man on Earth, an artist that I greatly admire, and it wasn’t long before he performed a song of his. This wasn’t the only cover he played, as he continued the set with an instrumental piece by the lovely John Butler. Although some of the elderly people couldn’t stop themselves from, somewhat awkwardly, clapping along to the song, the piece was performed expertly and was surely the highlight of the performance. Thus, besides some minor technical difficulties, I had a nice introduction to Aidan & The Wild. Hopefully I will be able to see him perform with the rest of his band some other time.

Being a massive theatre-geek (I can’t deny it) and a fan of the concept of Stukafest, I was hyped to check out one of the two theatrical performances that would be present during the evening: Live 4-Ever. I always get second-hand stress and excitement when I see actors walk on stage, as if I were to get on stage myself, and this feeling was in no way absent when walking into Bagijnhof 5 where the act was to take place. This sense of expectations and excitement was built on by the immediate mood that was set up by the cast. When audience-members walked into the room, they were instantly immersed into an alternate reality, the outside world disappeared, and we appeared to float in a bubble that made you forget you were standing in the middle of a cluttered common room. One actor welcomed the guests and offered us a ‘final commemoration’, while her fellow actors went through a repetitive, ritualistic motion of moving their bodies in the same continuous movements, repeating it over and over again, as in prayer. They let the tension build long after all viewers had entered the room, three actors continuing to perform their ‘ritual’ while the other took her stand at the microphone, but instead of addressing us adjusted and readjusted the height of the mic stand for an elongated amount of time. At their feet lay a tile run-way, a coffin of sorts. The build-up was intense, and it was only when one of the actors finally addressed us, that we felt some of our accumulated buzz fall away.

Despite the promising build-up, the performance afterwards fell a tad flat for my tastes. When the strange set-up was finally addressed, it was revealed that the actors ‘killed death,’ because they were fed up with fear, mortality, loss, etc. As I was promised existential theatre, I was hoping for something slightly more complex than what I consider to be a quite overdone, and by now, cliché topic: the will to cheat death and become immortal. After Death was killed, the actors rejoiced euphorically, summing up all the things they no longer had to worry about. This was followed by an even more euphoric dance on the tiles making up Death’s grave, and as the performers shouted out their concluding message that we should live life to fullest (!) and led us outside, I couldn’t help wondering: Did I miss a part? While I had initial high hopes for the show, it sadly did not live up to the expectations I had. I must say that the build-up to the introduction of the show may have been my favorite part, and if the show’s climax were as good as that initial entrance the show had the potential to be phenomenal.

Four-member Indie-Rock band, Lion’s Den, was playing in the first-floor Bachtensteene common room. My friends and I arrived a little late to the scene and were therefore, immediately greeted by a feeling of warmth from the band playing one of their characteristic easy listening, mellow, and unabashedly nostalgic tunes. The atmosphere had something of a ‘driving in the car late at night’ vibe. While at first resembling your run-of-mill indie band, the addition of trumpet to the majority of their songs, gave them another, completely enjoyable, dimension. Looking around the room, big smiles could be found on the audiences’ faces, as they enjoyed the musical journey. As the show came to an end, the chill and comfy atmosphere lingered on for a while, and for a moment all thoughts of school work were completely pushed aside. The band seemed to completely enjoy themselves as well, engaging with the audience and complimenting us on our enthusiasm. All in all, I’d say that Lion’s Den is definitely a band to keep an eye out for, look them up on Spotify or Youtube, it might not be the same as seeing them live, but still the perfect soundtrack for your cozy moments, late at night.

It’s difficult to put into words what it is like to experience an O, Kutjes performance, cramped in a Begijnhof common room, speakers blaring beats at a deafening volume, spectators exchanging glances, wondering what they signed themselves up for. I was one of the last to arrive and my girlfriend and I were tucked in a corner; that turned out to be the safest place. The two performers, Gigi Neverland and Yoni Loveless assaulted and seduced the crowd with a fusion of beautiful enticing melodies, hard hitting beats and screams. All the while they picked out random members of the audience and either whispered in their ear, rode them stripper style or again, screamed at them. While to some, this might seem far from pleasant, it was actually incredibly fun. Almost everyone was laughing or smiling, and the atmosphere (while filled with sexual tension) was honestly quite safe. This might have been due to the self-deprecating jokes that Gigi and Yoni were making or just the silly, ironical tone of the entire performance. I even had Yoni come up to me and tell me that I had to take care of her because she was so drunk (my girlfriend almost yanked my arm off!) There was also a short intermission where a bidding war started over some panties Gigi and Yoni whipped out of their cleavage, super fun and over the top! All in all, O, Kutjes was probably my favorite, if not the most memorable performance I got to see during this year’s Stukafest. Everyone was up on their feet dancing and having a great time. I certainly hope they’ll be back next year! 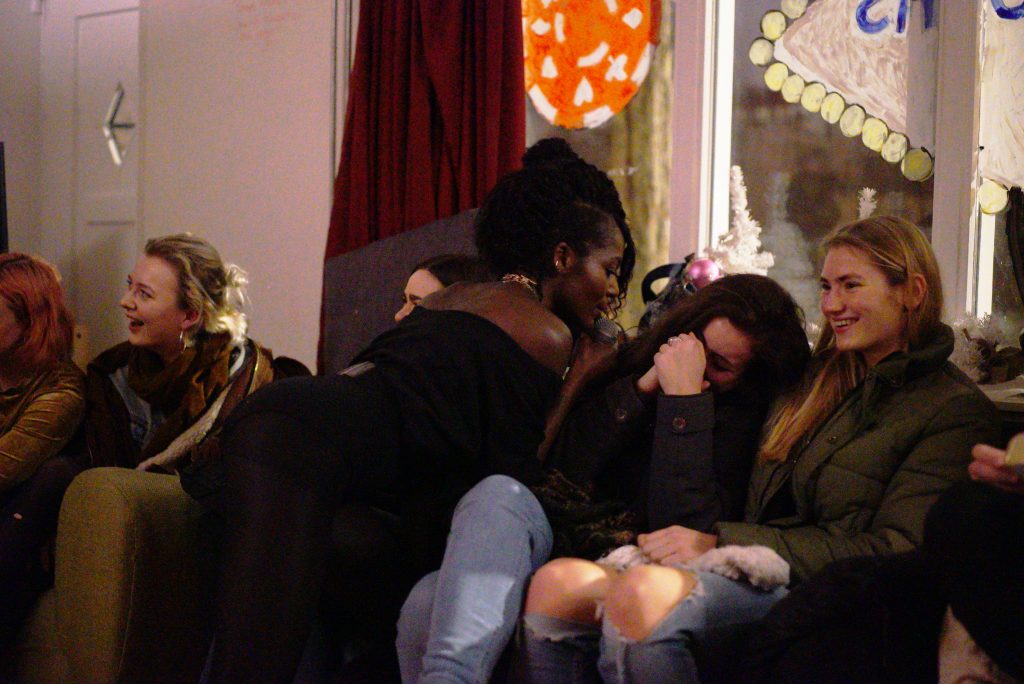 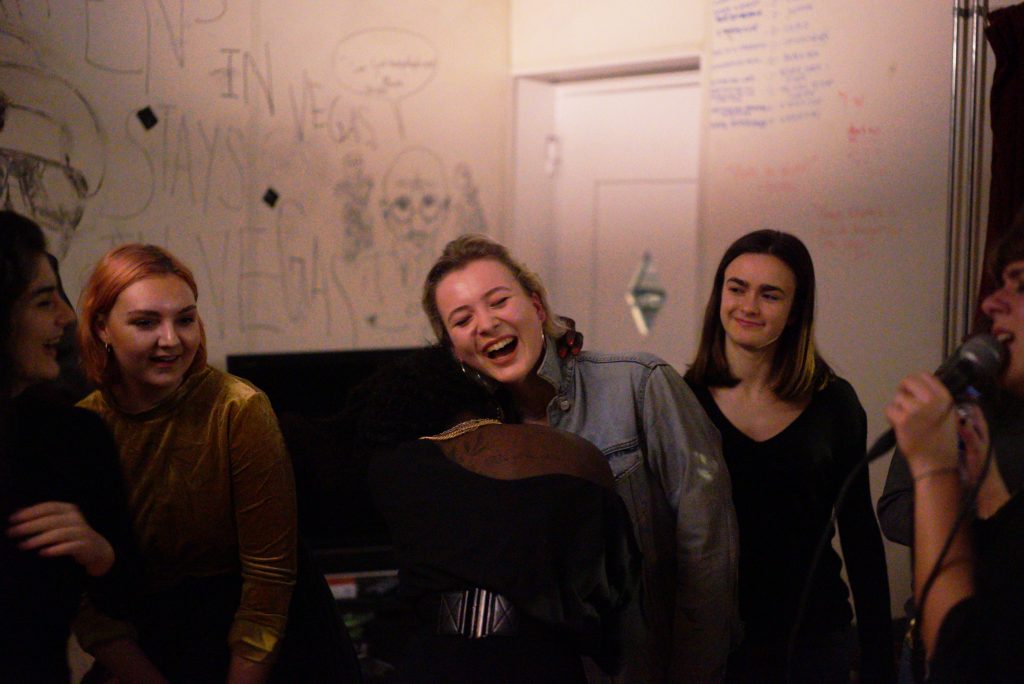 Finally, the evening took us to Koffiepand, the popular coffeeshop. Standing amongst the tables and chairs of the café, we settled down to enjoy the musical performance of WARD. WARD is a tiny, but completely spunky, one-woman-band who with nothing but an electric guitar, a keyboard and a loop machine can make you dance along to her electric, poppy beats. Her songs have an autobiographical element to it, which are only enhanced by how much energy and soul she puts into her performance. Before long, she had turned the small space into a dance floor all its own, the perfect warm-up to the Stukafest afterparty! 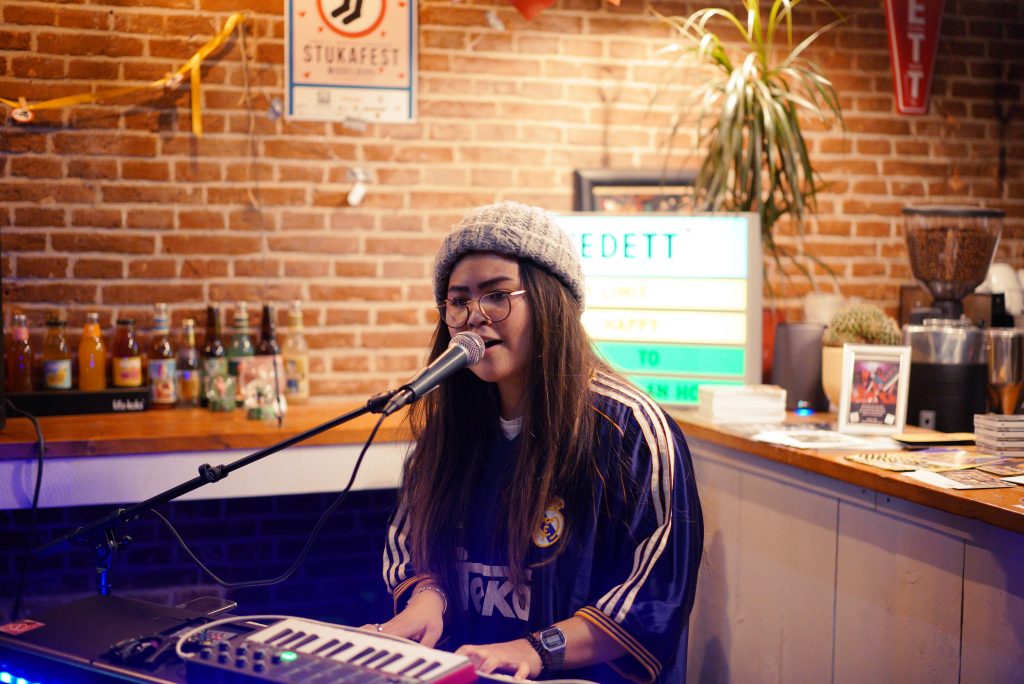 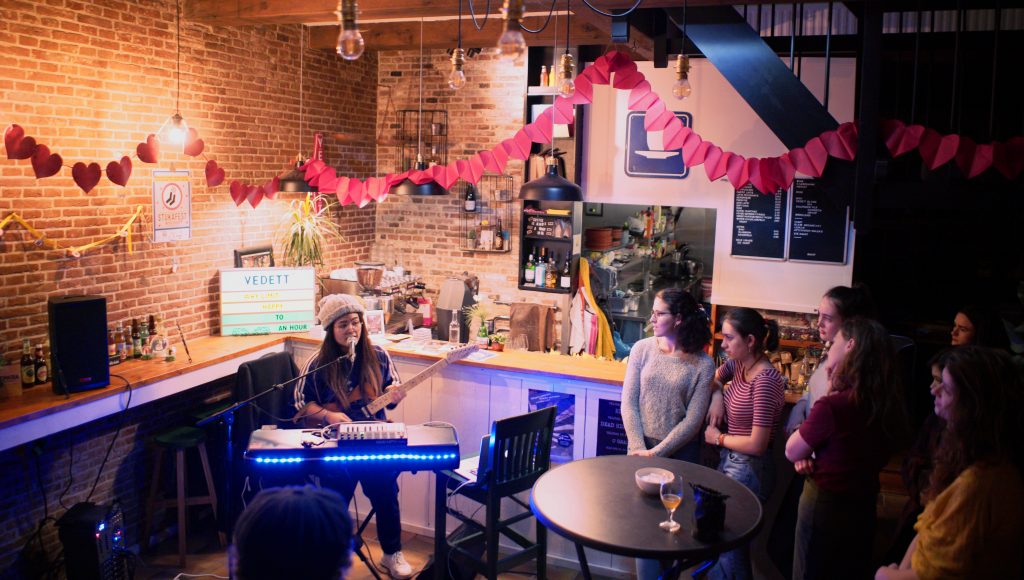