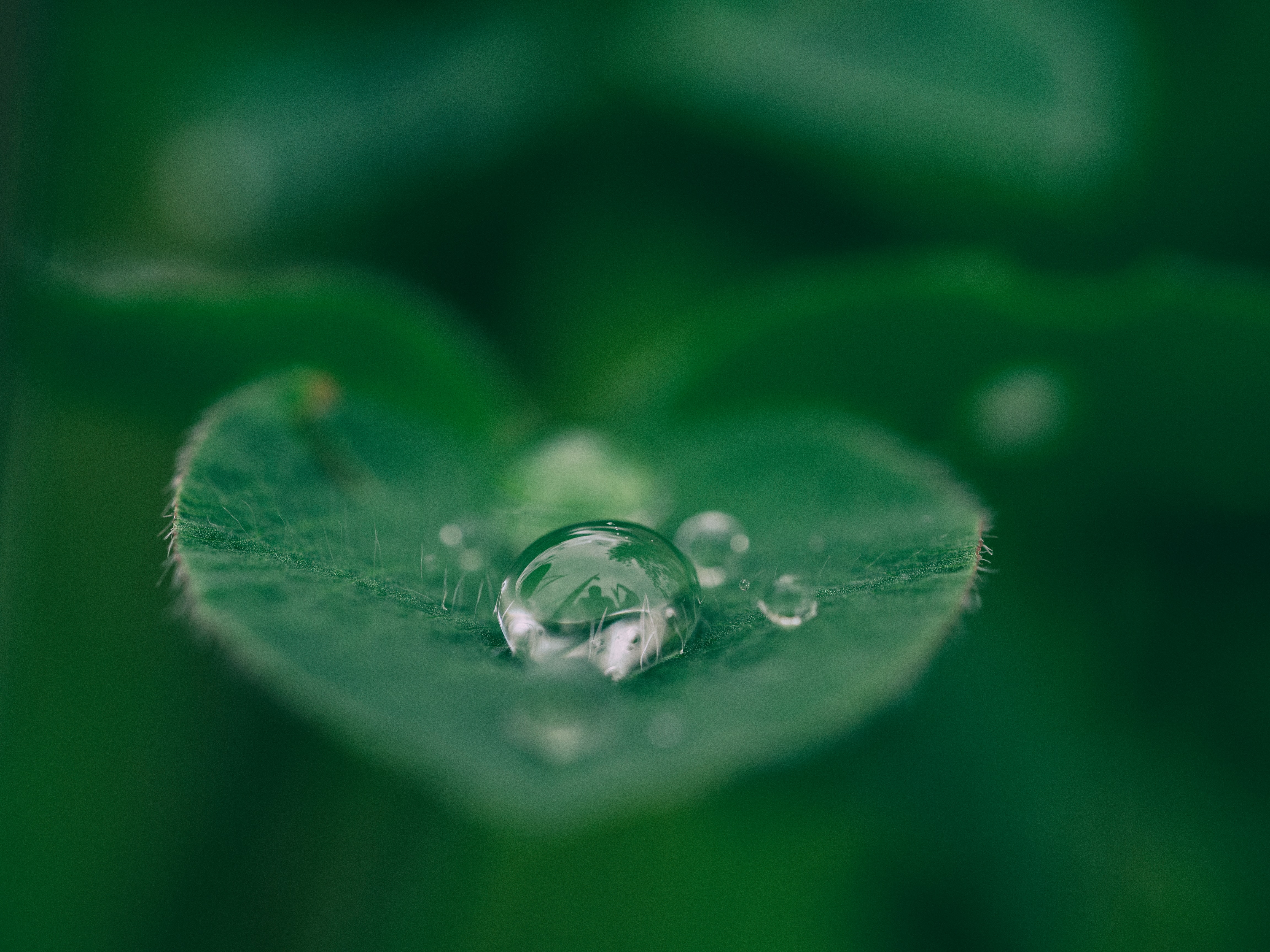 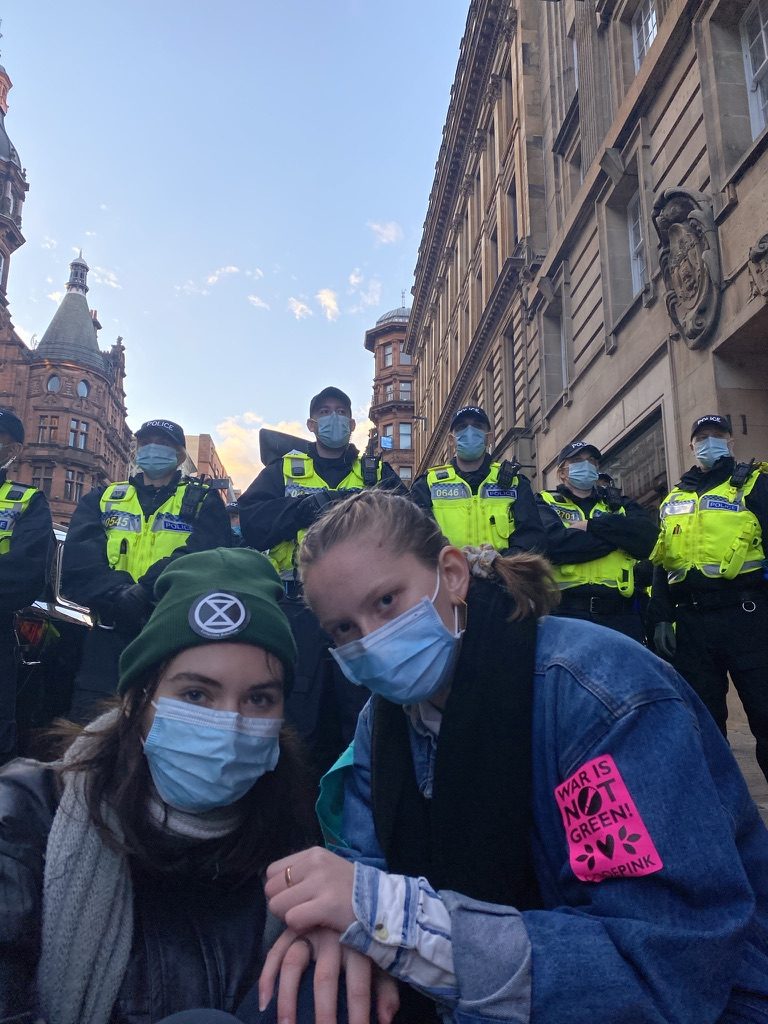 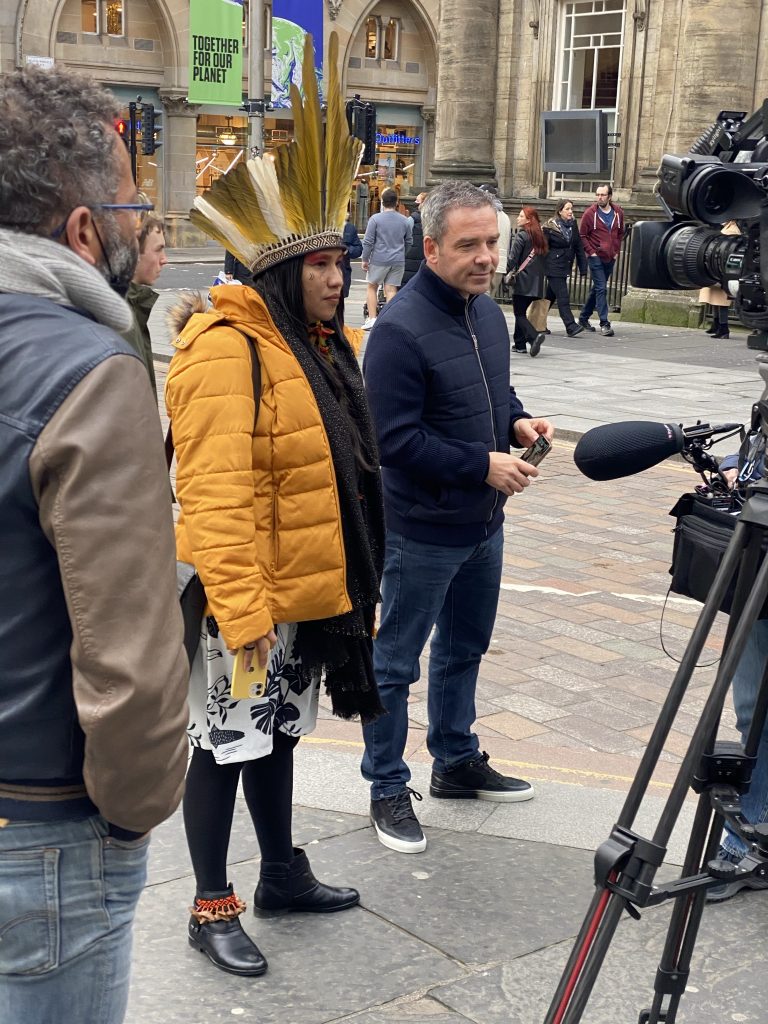 *This interview was spoken. The quotations given are verbatim from the voice recording from the interviewees.

From October 31st until November 12th, global leaders and other parties gathered to bring climate change back to the table on the 26th annual summit: COP26. Whilst inside the conference discussed the future plans concerning the outstanding issues of the Paris Agreement, the future stood outside the streets of Glasgow (the location of the summit), raising their voice calling for more and real action on climate change.[1] Some of these people were Myrto (Chair & Secretary) and Heleen (Social Media & Marketing Manager) from our Green Office at UCR, with their goal to report back to their peers and actively protest for climate change.

Their journey started with the campaign “Rail to the COP”, which promoted and facilitated the transition towards a sustainable future regarding traveling by offering train rides for the youth to Glasgow, including workshops.[2] Heleen was particularly concerned about a just transition: “People that work in carbon-heavy sectors are often ignored, e.g., people working for aviation. So, we had a workshop on how we could facilitate a just transition for people working in these sectors.” Myrto also had a workshop on the future of railing: “Trains should be the transport method of the future. But as you can see, for example in Germany, train rides keep getting more expensive. If you must choose between a 100-euro train and a 20-euro flight, you need to think about what can be improved. Taking the train shouldn’t be a luxury.”

Moreover, their experience during the COP was impactful and rewarding; one of the most impactful moments for Heleen was the greenwashing march organised by Extinction Rebellion. “Greenwashing is a really big issue now because it gives us a false sense of progress. We think that we are doing well because certain companies are advertising themselves as sustainable, but if you look into it, we are not making any progress at all. Even governments are greenwashing themselves- and so the COP. This is what the march was about, and it was amazing to see how many people showed up for a smaller march. A lot of motivated people were there, but so was the police. Within a certain moment, we got kettled in for a couple of hours.” Kettling is a police tactic used to control large crowds, limiting their movement by keeping them within a certain area. Protesters can either leave through an exit controlled by the police, an uncontrolled gap, or are either contained, arrested, or prevented from leaving.[3] “It was really powerful for me to see that the people with the drums and sambas just kept lifting the mood- keeping the spirit at its highest. Seeing so many activists at the spot, willing to be kettled in by the police for several hours, was a powerful moment for me.” 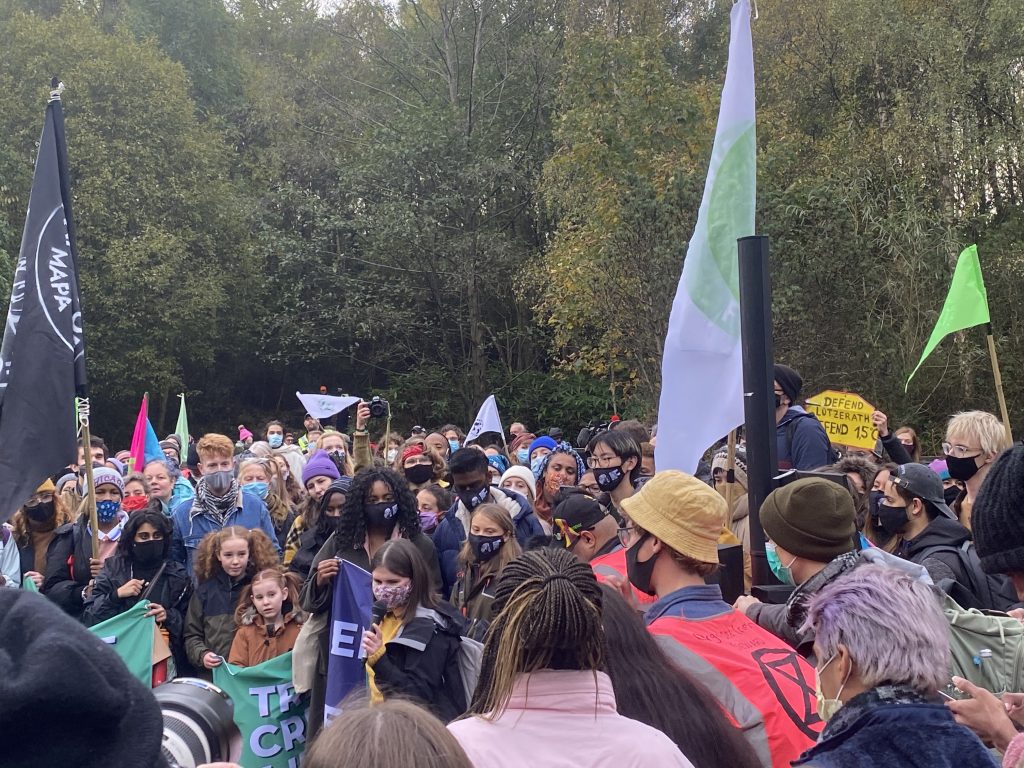 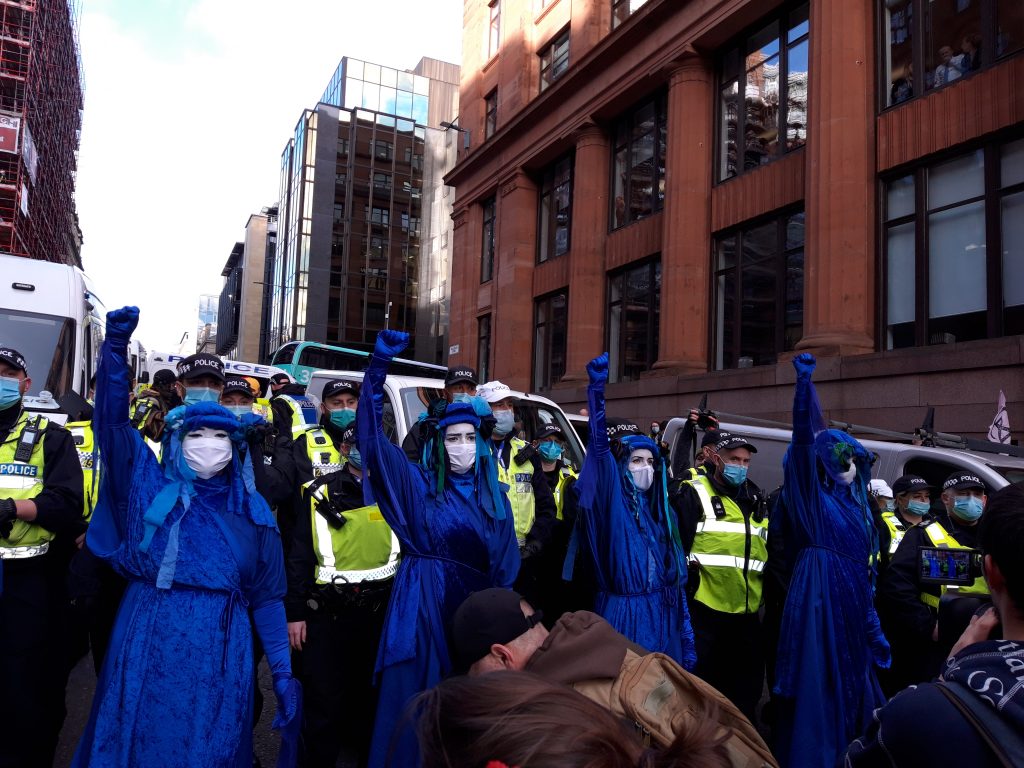 Furthermore, Greta Thunberg was also present during an event about the MAPA (Most Affected People and Areas) and the Global South.

That is when Myrto and Heleen experienced the aggressions and disrespect of the media: “They kept asking her: what is your message? Shouldn’t this be clear by now? They put very unnecessary media attention towards her, with aggressive photo-taking and pushing to get closer to get a shot. It wasn’t about Greta, it was about MAPA and the global south, that is also what she said in her speech.” Heleen further emphasised how the media was not able to get the footage that they wanted, so their aggressiveness forced the activists to work together to get Greta and other prominent activists out of the park.

Myrto also described her euphoria traveling to COP26, which slowly faded the more time she spent in Glasgow. “Over the period of two weeks, I realised, more and more, how useless it was.” Heleen further reflected on her positionality and how she is impacted. “I always knew that we are disproportionally impacted. As a European, white, middle-class person- I’m quite well off. I won’t feel the effects of climate change until far into the future, but I know that people right now are impacted by it. I don’t think I have taken the amount of time and patience to listen to MAPA before I went to Glasgow. Their voices are the most important now. We decided that our main message, after the COP, would be for UCR to listen to MAPA, listen to the Global South, they are the people that are affected right now, and they are the ones with the solutions.”

Myrto highlighted that, in her social media feed for the Green Office, it might seem that they (MAPA) hold a lot of speeches, but they barely have any say in the decision-making process. And because of the media’s lack of communication on this matter, the public is not receiving the right message.

When asked about Myrto and Heleen’s hopes for the COP, a big sigh filled the room. Heleen hoped for a revolutionary agreement like in Paris. Still, to her, it became instantly clear that that was not the case: “There were more delegates from the fossil fuel industry represented in the blue zone than of any country. That shows you were the priorities lie. You can also see this in the final agreement that was put forward on Saturday. The last-minute deal between the US, EU, China, and India changed the wording from phasing out coal to phasing down. It could have been a big achievement, but now it’s not.”

For Myrto going to Glasgow was a wake-up call: “I knew, of course, climate change is real, it is happening, but in your daily life, you tend to have more important issues. But during these weeks, I think we all realised that all my actions should be in line with climate change.”

Myrto and Heleen hope to spread their takeaways from their journey to Glasgow to their peers. It is crucial to stay informed about the world’s climate issues and be aware that it is an intersectional problem. It all comes down to different problems. A way to start could be listening to UCRadio’s Green Talk on Spotify. Additionally, their advice is to choose to volunteer for a society linked to the environment, human rights, health etc., for example, Amnesty International, the Red Cross or, ideally, the Green Office. Be active, go on the streets, and listen to the people, especially those most impacted by the changing climate. 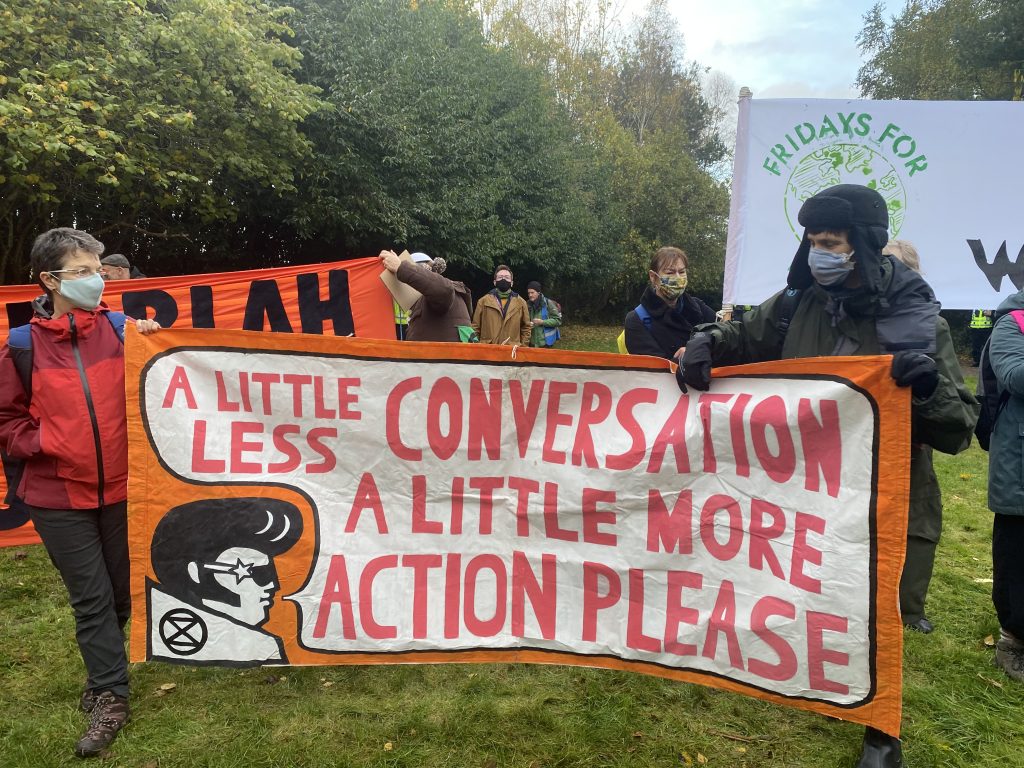 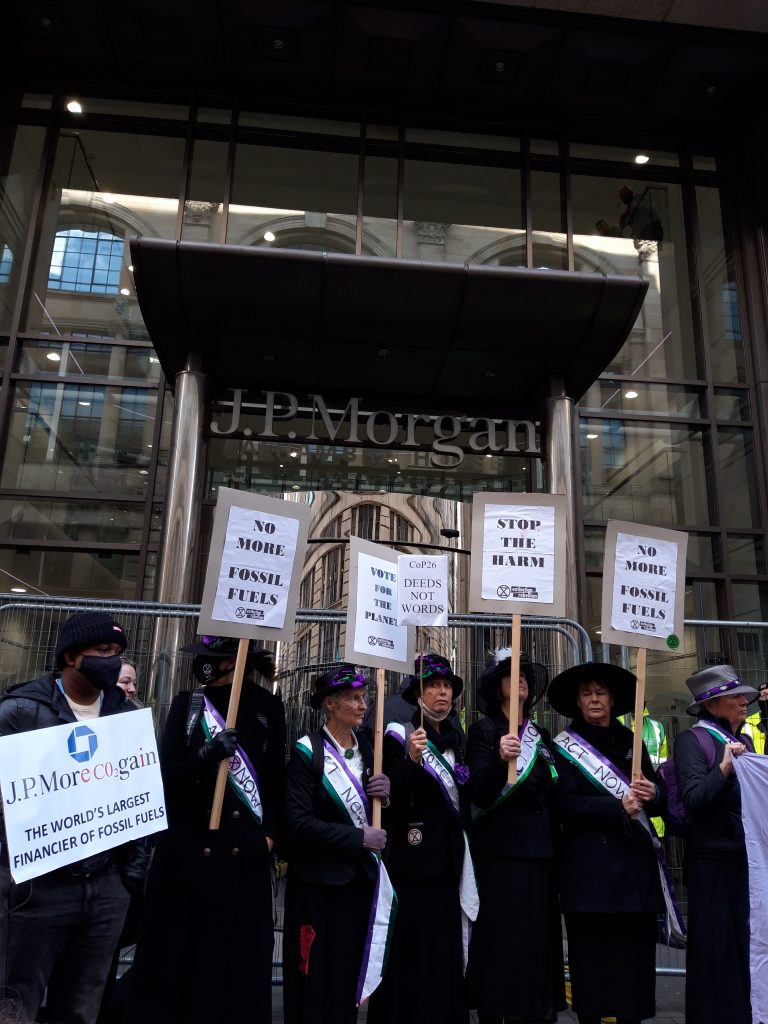