The French Elections: What You Need To Know 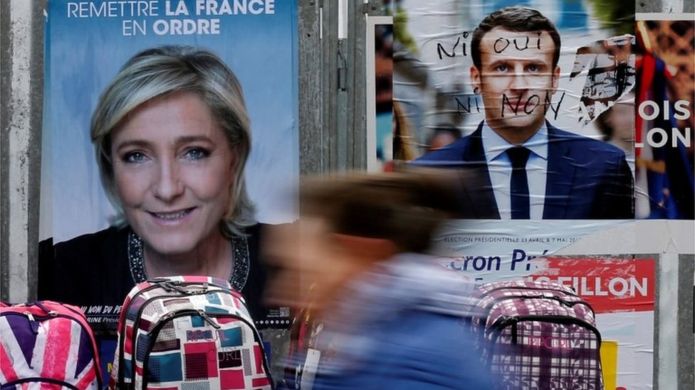 On April 23rd and May 7th, the French people get to elect their new president, which happens in a round of two elections. The first round was held on April 23th and was a race between all eleven candidates, and the results were interesting to say the least. The two major parties that have been governing France for decades, Parti socialiste and Les Républicains, have been side-lined by the new En Marche! and Front national.  As none of the candidates received the majority vote, a second voting round has been issued for May 7th.

The two candidates running for the French presidency are Marine Le Pen, daughter of the party’s founder Jean-Marie Le Pen who ran for president in 2002, and Emmanuel Macron, who founded En Marche! in April 2016 and served as the Minister of Economy. Le Pen represents the far right front, while Macron has created a centrist party.

So, what is the deal? Why is this election one of the scary ones? It comes down to the stability of France, as well as the stability of the European Union. Le Pen has been diametrically opposed to France’s European Union membership while Macron is pro-Europe. When looking at the proposed plans of each candidate, Le Pen’s sounds rather familiar to those of Trump and Wilders. She plans to impose higher taxes on non French goods, to give higher priority to French nationals when it comes to social housing, to close “extremist mosques”, and to abandon the euro and debate France’s EU membership. Macron’s plans are radically different. He plans to unite France’s pension system, lower corporation taxes from 33% to 25%, have more teachers in deprived areas, invest €50 billion in job training and renewable energy, as well as strengthening ties with Europe.

As you can see, these candidates couldn’t be more different. The first round was won by Macron, and polls are suggesting that he will also win the second round. Stock markets have been on the up since his win on Sunday, and the tensions within the EU have lessened. There is still two weeks to go, and as we all know, everything can blow up in two weeks, so let’s wait and see.